Waiver Flavor: The Second Half Surge 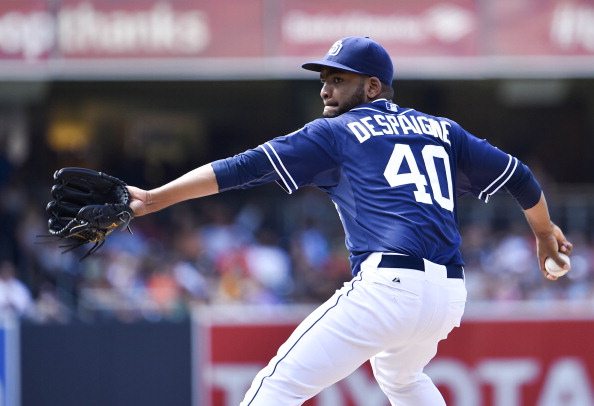 Sometimes players need the All-Star break to reevaluate their approach at the plate or to work on make minor tweaks to a pitching arsenal, but now with a full wee in the books following the Midseason Classic, there are some players who are on the rise.  Although the second half sample size is going to be limited, the players below have gotten off to a hot start and could be yours to own in most league formats. So let’s get to it!

Josh Rutledge, 2B, SS (COL)--It happens just about once every season. Troy Tulowitzki has been placed on the disabled list, this time with a thigh injury, making the shortstop position Rutledge’s for the taking. Although he has just 126 at-bats on the season, Rutledge is slashing .302/.358/.484 with three home runs, 12 RBI and 22 runs scored, with good chunk of his hits coming since returning from the All-Star break. Over his last five games, the Rockies new shortstop is 8-for-20 (.400 BA) with four extra-base hits (1 HR), two RBI and three runs scored, which gives him some fantasy value for short-term purposes at the very least. He has shown the ability to step up in the absence of the Rockies All-Star in the past, so hopefully this time around will be no different. Those in deep mixed leagues will want to add him as soon as possible, especially with the chance of Tulowitzki being moved before the trade deadline.

Chris Carter, 1B (HOU)--I know what you are thinking, how could I possibly be featuring a player in this week’s column that is constantly flirting with the Mendoza Line? Well that’s because Carter has now hit safely in four straight games, while logging six extra-base hits (1 HR) and five RBI over that stretch. He currently owns a batting average north of .300 since returning from the All-Star break, which he will never be able to maintain considering his 35.8 strikeout rate, but with George Springer out of the lineup there will be more opportunities for Carter to drive in runs at least for short-term purposes. Currently he is on pace to set a career-high in home runs, which stands at 29 long balls from a season ago, while maintaining a 14.8 AB/HR rate. With home runs at a premium, Carter’s bat needs to be owned at this point, even if that means taking a hit in the batting average category. It’s just how it is.

Dustin Ackley, 2B, OF (SEA)--After starting the second half going 12-for-27 (.444 BA) with four extra-base hits, three RBI and three runs scored, it is once again time to start paying attention to Dustin Ackley.  Unless the Mariners are willing to trade away some their top prospects , the fact remains that Ackley is going to continue to see regular at-bats in the team’s starting lineup, which up to this point hasn’t meant anything.  He still isn’t hitting home runs (75.5 AB/HR) and has just 32 RBI on the season, but has be unfortunate in a good portion of his plate appearances, considering he is sitting on just a 18.2 percent strikeout rate with only 21 free passes. Could his recent production be a mirage? Possibly. But he is only a handful of seasons removed from being a top prospect and at the age of 26 still has plenty of time to turn things around. Not to mention he classifies at both second base and outfield in most league formats.

Emilio Bonifacio, 2B, OF (CHC)--The Cubs Opening Day center fielder was out of action for over a month, but has since returned to action and picked up right where he left off. Since making his return on July 22, Bonifacio has registered a hit in all three of his games, even having himself a multi-hit performance. He is now slashing .263/.306/.341 with just one home run and 16 RBI, but will be beneficial in both the runs scored (30) and stolen base (16) categories now that he is back sitting atop the everyday lineup. Those in deep leagues looking for speed will want to give Bonifacio a long look, just realize that the .313 batting average from April is likely not going to resurface at any point in the second half.

Jorge Soler, OF (CHC)--This one is for my keeper league and dynasty format followers. After making Double-A pitcher look like they belonged in the Little League World Series, batting .415 with six home runs over 65 at-bats, the Cubs top outfield prospect has since been promoted to Triple-A as he inches closer to the big leagues. Although he is not expected to be make it to the top level before September, now is the time to start stashing him in all qualified leagues. He has played just one game at the Triple-A level, going 1-for-3 with two walks, bringing his walk total to 18 through just 112 plate appearances, which is the type of patience that will get him to the big show once the Cubs make room for him. Currently he is owned in less than five percent of leagues throughout the major providers, but of the few prospects worth stashing, he could end up having the most production of the select few in 2014.

Brandon McCarthy, SP (NYY)-- A change of scenery has certainly done the trick for McCarthy since taking his services to the Bronx, having allowed only three runs while owning a 17:3 K:BB rate over his first three starts (18.2 IP). Despite his recent production, he is still sitting 5-10 with a 4.49 ERA and 1.35 WHIP through 21 total starts, which goes to show just how bad he was while still in the desert. However, it is truly amazing what a little confidence can do and as long as he can manage to keep the ball down against left-handed hitters (.322 BAA), there is still plenty to look forward to from this 31-year-old. Those in deep leagues looking to add pitching depth will want to give McCarthy a try, but expect production somewhere in the middle, at best, the rest of the way.

Wade Miley, SP (ARI)—Miley’s ownership continues to climb as we get deeper into the summer, as he has now allowed three runs or less in five of his last six starts, while owning a 40:11 K:BB rate over that stretch. He is now sitting 6-6 with a 4.16 ERA and 1.23 WHIP through his first 21 starts, but owns a 1.88 ERA in the month of July, which is really what counts at this point in the season. Although the Diamondbacks offense has been rather in consistent for much of the season, which lowers his potential fantasy value slightly, he still remains a must-own for those in deep leagues especially if in need of increase production in the strikeouts category.  As long as he continues to force more ground balls than fly balls (1.03 GB/FB), his recent success should continue through the rest of the season.

Odrisamer Despaigne, SP (SD)--You may not be able to pronounce his name, but the Padres freshest arm in the starting rotation demands your attention. Despaigne pitched the best game of his young career this past Sunday, flirting with a no-hitter before it was broken up after 7.2 innings, resulting in his second no-decision over his last three starts. He is now 2-1 with a 1.31 ERA and 0.90 WHIP through his first five career starts, but his 17:11 K:BB rate over 34.1 innings is certainly not anything special. The Padres young hurler is a nice story up to this point, but has had some luck come his way to lead to such a good start. He has held opponents to a .177 batting average thus far, which is definitely not going to be sustainable if he remains in the team’s starting rotation long term. However, as we have seen in the past with Padres pitchers, a friendly home ballpark can be just the ticket to make yourself a successful pitcher. Similar to that of Wade Miley, as long as he is able to maintain his solid 1.30 ground ball-to-fly ball rate there is certainly room for him on fantasy rosters even after both his ERA and WHIP adjust with more innings under his belt.

Neftali Feliz, RP (TEX)--After losing out to Joakim Soria this past spring Feliz was sent packing to Triple-A to redefine himself as a big league force. Well, after a terrible season, the Rangers decided it was time to start selling off the players of value, with Soria being the first to leave town. Manage Ron Washington has indicated that Feliz will get the first stab as nailing down the close role, which makes him a must-own player in all but the shallowest of league formats. Up to this point, Feliz hasn’t looked like the pitcher that saved 72 games from 2010-2011, but sometimes opportunity is just as good as how well you look on the field. Through seven appearances, Feliz owns a 2.61 ERA and 0.77 WHIP while having struck out just 4 batters over 10.1 innings. On the bright side he has logged only two walks, which is more important than racking up the swing and misses at this point. Even with all the experience, he is going to be on a short leash moving forward, but a great pickup nonetheless.

Jake Petricka, RP (CWS)--The White Sox have used numerous pitchers in the ninth inning this season, and following the injury to Zach Putnam, it is now Petricka’s turn to do the honors. Through 52.1 innings of relief for the White Sox, Putnam is sitting on an impressive 2.06 ERA and 1.26 WHIP while maintaining a rather underwhelming 41:26 K:BB rate. Although he isn’t as dominant as most closers, he has managed to earn saves in each of his last two tries, which will go a long way with manager Robin Ventura. At least until Matt Lindstrom is able to return, Petricka is worth a shot for those in desperate need of saves. Just know it may be short term.