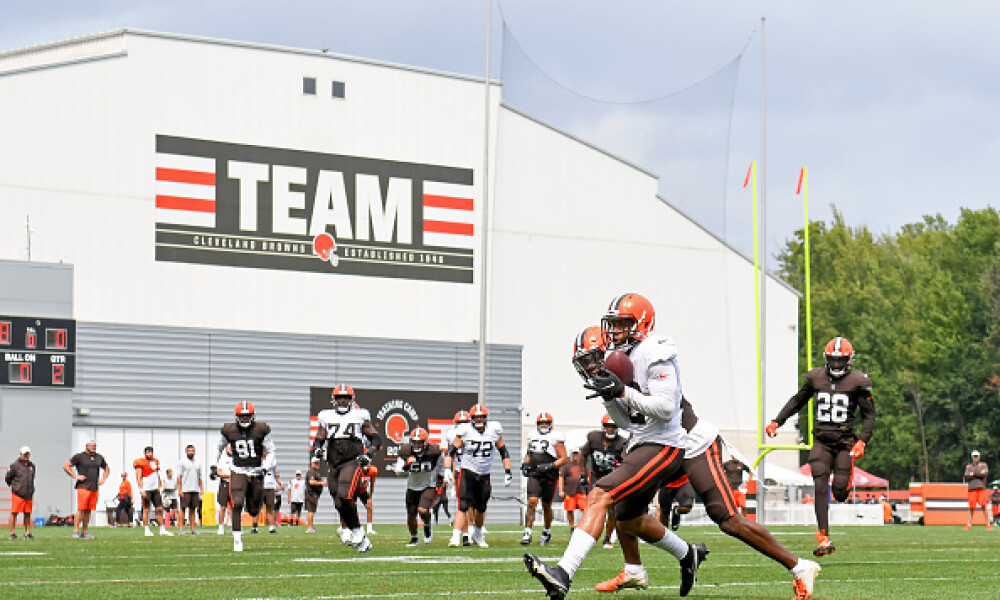 Faster than your average drafter, more powerful than any fantasy analyst, leaping last place in a single bound it’s... The KANGASMAN. That’s right everyone's favorite fantasy superhero KANGASMAN, aka Charles Kangas, is here to drop some fantasy football knowledge on you, and I get to talk about my favorite team, the Cleveland Browns. If you’re not following me already go ahead and click that follow button on the old twitter app @KANGASMAN_FS

Ask not what the Browns can do for you but what you can do to get more of them on your fantasy teams. Without further ado my homer/fantasy take on the playoff making, two-time Steeler beating, the 11-5 team from a fantastic city, with the best fans in the NFL... The Cleveland Browns.

How about I start with the easy part that no one has to tell you about, but I’m going to reiterate anyways. The Browns’ running backs are their strength and this offense is built for them to run all over the opposition. If you aren’t drafting Nick Chubb then you must hate losing because all he will do is provide you with a consistently good production. In 12 games last year he ran for 1,065 yards; more than his partner in crime Kareem Hunt who managed only 841 yards in 16 games. However, that’s not to say Hunt shouldn’t be drafted because even with those yards he still managed six scores on the ground, 198 carries (eight more than Chubb), 38 receptions for 304 yards and five touchdowns. He averaged 4.2 yards per carry while facing an average of 7.13 defenders in the box and a stacked front 31.8% of the time.

Chubb, the bigger back, is faster than his counterpart with a 40 time of 4.52 seconds and he got over 1,000 yards with eight less carries and four less games. Chubb ranked second in breakaway runs with 14 and third in breakaway rate at 7.4%, also facing a stacked box of defenders 28.9% of the time, with an average of 7.07 defenders in the box. Chubb doesn’t just break away from people, he runs through them all the way to 5.6 yards per carry and gets stronger as the game goes on. Courtesy of ESPN’s Field Yates he averaged 10.03 YPC in the fourth quarter leading all running backs in that category. Meanwhile, the next closest to him at 6.62 YPC was none other than everyone’s favorite bell cow back, Derrick Henry.

The cherry on top of this all is that Chubb’s lack of usage in the pass game gets misconstrued for a lack of ability in the pass game. He had 38.8% route usage to go with 148 routes run, where he was targeted 18 times and caught 16 of them for 180 yards and a touchdown. There isn’t a lack of ability there as much as there is a lack of usage, and the Browns found the recipe to simultaneously win games and get the most out of their two stud backs. Use Kareem Hunt’s receiving ability to give Chubb a rest so he can plow through the defense in the fourth quarter.

Where I meet in the middle with this team is the quarterback position as last year Baker Mayfield ranked as QB17 in PPR leagues. On top of this being his first time with the same offense two years in a row in his NFL career; after week seven, the only quarterback with a higher passer rating than Baker was league MVP Aaron Rodgers. Mayfield delivered when his team needed him and most importantly limited his turnovers to eight interceptions after his dismal 2019 where he threw over 20. Baker is by no means a QB1 at this point in fantasy, but if you look at his trajectory in college where he had the same offense for three years in a row, year two in that system he showed steady improvement before skyrocketing in year three.

With a real offseason, the coach of the year Kevin Stefanski, the best running back duo in the NFL, and the return of OBJ; Baker Mayfield could easily break into the top 15 of fantasy quarterbacks this year and provide you with a solid QB2 in superflex leagues. Need more proof? I finished eighth overall in the Hunger Bowl with Baker as my QB2 and no QB3 for my bye weeks.

The wide receivers and tight ends are where I get a little more down and dirty as there was some growth after the loss and the return of the ever polarizing Odell Beckham Jr. When the Browns lost OBJ for the season they lost their best downfield threat which was evident in his three-touchdown game before injury, and the way the Browns offense worked after he got hurt. They shifted to more of an over-the-middle passing game, hit the RB’s and let them carry the Browns offense. And (courtesy of my good friend Andrew Cooper) they played three tight end sets on almost 15% of their plays. With little experience to stretch the field this hurt the Browns when push came to shove in the playoff game versus Kansas City, and the controversial fumble call on the real “Hollywood” Rashard Higgins at the goal line.

However, OBJ returns and has looked as good as I’ve seen him look since coming to the Browns and his best friend Jarvis Landry lost 15 pounds in the offseason. That cannot be underestimated how much that will help Jarvis move quicker and stay healthier during the season. As he dealt with a nagging rib injury all season and was asked to do a lot of blocking with his over 200-pound frame. He’s leaner, meaner, quicker, and has his best friend back to take some of the pressure off to be the guy in this offense. Beckham’s injury history does work against him and I will caution anyone who is drafting him to not overdraft him, but as I like to say “no risk it, no biscuit.”

As for the deep dives of the position, pay close attention to Donovan Peoples-Jones as he has had a great camp and has always had the physical tools of someone far better than his draft position. With a 40 time close to OBJ’s, a QB rating of 145.8 when targeted, route participation of 32.8%, catch rate of 70% he has the ability and tools to be OBJ’s replacement if and when the Browns decide to move on. When discussing the REAL HOLLYWOOD Rashard Higgins all you have to do is line up his numbers with Jarvis Landry’s and see they’re basically the same guy. The only difference is Jarvis makes the money therefore he gets more snaps. However, the OBJ injury provided an opportunity for him last year, to which he seized. Ranking as WR63 with 37 catches for 599 yards, four touchdowns, and averaging 16.2 yards per reception; Higgins provided Baker with some more consistency at the position once OBJ was gone. Proving to once again be one of Baker’s favorite targets going all the way back to Mayfield’s rookie year where these two made an instant connection. With a route participation of 71.2%, target share of 19.7%, and a QB rating of 119.0 when targeted I expect Higgins to be in the mix. Trust me when I tell you that you can do a lot worse than these two guys in a deep league or late in a draft.

I’ll sum up the Tight Ends as quick as possible with these numbers:

If drafting in redraft Hooper is the guy you want from this group but I would suggest going elsewhere as he ranked only as TE21 last year. If playing in a dynasty league I would seriously consider a long-term investment in both David Njoku and Harrison Bryant. Njoku’s physical tools are off the charts and is easily the most gifted athlete among them; on top of this he showed he can block as well as be relied upon in the passing game. Harrison Bryant’s usage in the pass game speaks for itself, while the injury to OBJ could have inflated some of these, the Browns clearly like him a lot and want to see his development through. With long term investments needed elsewhere I could see the Browns cutting ties with Hooper after this season and moving forward with Njoku and Bryant as their guys.

This was THE FANTASY SUPERHERO KANGASMAN and the dive into my beloved Brownies. Once again please give me a follow on twitter if you don’t already @KANGASMAN_FS

Faster than your average fantasy player, more powerful than any fantasy analyst, leaping last place in a single bound... It’s The KANGASMAN aka Charles Kangas. Follow me and I’ll rescue you from fantasy obscurity and get you to the winner’s circle.