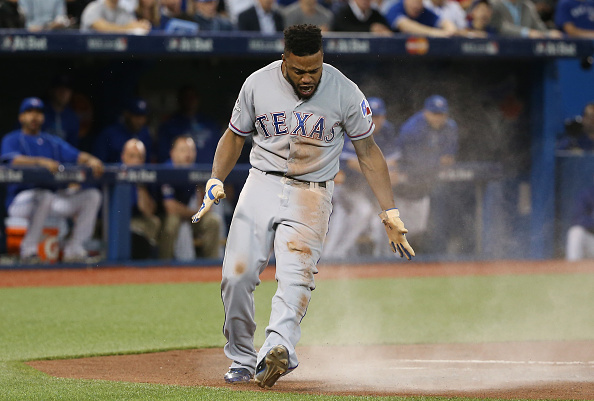 With the baseball season fast approaching and Spring Training upon us, fantasy owners are beginning to compile their rankings and projections for 2016. Sorting through established players and household names is one thing, but leagues are never won by big-named stars performing at their expected statistics. Instead, crowns are donned by the owners who were able to sift through the first 200 players selected and draft upside “deep sleepers” (ones who are able to greatly outperform their ADP and provide exceptional value to their owners). Which players qualify for that distinction this season? Read on and find out.

A former Rule-5 pick, DeShields was forced into action last season due to a bevy of injuries the Rangers sustained in the outfield. Despite having just 27 plate appearances at the Triple-A level, DeShields proved he could hold his own in the majors, posting an above-average .344 OBP while chipping in 25 stolen bases. A quick glance at DeShield’s minor league track record suggests there is room for growth in several categories in 2016 (namely power, speed and runs scored). The expectation is that DeShields will be the team’s starting center fielder and leadoff hitter, although his job security is shaky at best, given his porous defense. Still, the leadoff role for the Texas Rangers carries a great deal of upside, considering the team finished third in runs scored and RBIs in 2015, even with a makeshift roster.

1.) Speed and Power profile – Players who have the ability to swipe 30-plus stolen bases this season are at a premium, and assuming that DeShields cracks the 450 plate appearance threshold, he should break that mark easily. Through each step of the minor leagues DeShields has nabbed more than 50 bases at each level, including 101 during the 2012 season. Although it may come as somewhat of a surprise given that he only hit two home runs in 2015, owners will be happy to know that DeShields has already demonstrated in the minor leagues that he has a moderate amount of power as well. As recently as 2014 while at the Double-A level, he managed to hit 11 home runs in 507 at bats. This profile mirrors a much younger Brett Gardner (who is being drafted more than 80 spots ahead of him in ADP).

2.) Sustainable statistics - While DeShields rookie campaign wasn’t earth-shattering from a numbers standpoint, it far surpassed any expectations the Rangers ownership had. The numbers which he posted are in line with how he performed in the minor leagues, and (if anything) there is room for immediate improvement as well. Throughout his career he has demonstrated the propensity to draw a walk (his 10.8 BB percent was actually below the 12.0 rate which he posted in 2014). Perhaps most importantly for a leadoff hitter, DeShields showed he has the ability to get on base and set the table for the team’s sluggers. Taking 2015’s numbers into account, DeShields averaged .685 runs per game over the span of 121 games. Even without any semblance of improvement, that rate would lead to 102 runs scored over the course of 150 games. As reference, that mark would have tied him with Dexter Fowler and Manny Machado for seventh best in 2015.

1.) Veteran backups - As mentioned earlier, DeShields isn’t exactly known for being the second-coming of Jim Edmonds in center field. His speed allows him to cover plenty of ground, but his poor ability to track the ball and below-average arm mean that he is just a few mishaps away from landing in Jeff Banister’s doghouse. During late February the Rangers re-signed Drew Stubbs to a minor league contract with an invitation to Spring Training, and also signed former Chicago White Sox outfielder Jordan Danks. While on paper these additions may seem like depth additions or reserve players, they certainly don’t signal supreme confidence in DeShield’s ability. Additionally, one of the team’s top prospects (Lewis Brinson) is an outfielder who is already at the Triple-A level, plays stellar defense and possesses much more power than DeShields (Brinson has a 60/60 RawPower rating per FanGraphs).

2.) Only a three category contributor - While DeShields does have the ability to contribute above average (or in the case of stolen bases, elite levels) production in three categories, he profiles as simple league-average in the remainder. His historic track record suggests a K%  north of 22 percent, which caps his .AVG and .OBP upside. In 2015 DeShields had a near 50 percent GB%, and only carried a WAR of 1.7.  Batting leadoff also caps his RBI opportunities.