Drew Phelps explores every Fairway, reads every Green and uses his DFS Golf experience to put together a winning DFS Playbook for the WGC-HSBC Champions. 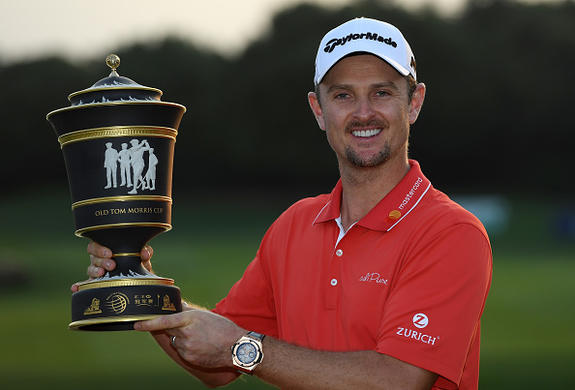 The World Golf Championships concludes its 2019 season at the HSBC Champions played on the Sheshan Golf Club in Shanghai, China.  Dustin Johnson took down the Mexico Championship, Kevin Kisner won the Match Play and Brooks Koepka brought home the Invitational which leads us to this finale.  All of the WGC events boast a huge purse and this one is no different with $1.745 million of the $10.25 million dollar purse going to the winner.  Xander Schauffele beat out Tony Finau in a playoff to win the championship last year.  If a player would like to qualify for this event, they need to have either won a major this season, won a WGC event in the last calendar year, be ranked within the top 50 in the official World Golf Rankings, or be ranked in the top 30 in the Race to Dubai or the FedEx Cup standings.  We've got 78 players competing this weekend and all 78 will play the weekend as there is no cut in this event as it is in every WGC tournament.  It is time to take a closer look at the course.

The Sheshan Golf Club has hosted this event every year since its debut in 2005 except 2012 when it moved to Mission Hills Golf Club in Shenzhen.  Tiger Woods loves this course so much, he featured it in his EA Sports video game in 2009, 2010, 2011, 2012, and 2014.    The basics of the course is a par 72 that scretches out 7,266 yards which is pretty average for a PGA Tour event.  It features a 603 yard par 5 and the average length of the four par 3s is 207 yards.  When I see two par 3s over 210 yards, I'm immediately looking for ball strikers with a good long iron game.  Anytime you've got four par 5s like this course, scoring on those holes should be an important stat to target as well.  When you look over the past winners such as Schauffele, Justin Rose, Hideki Matsuyama, Russell Knox, Bubba Watson, Francesco Molinari, Dustin Johnson and Ian Poulter, a common thread among most of these guys is strokes gained off the tee.  Whether it's with distance like a Dustin Johnson or with accuracy like Francesco Molinari. that seems like a good place to look for targets.  The winning score has ranged between 10 under and 24 under par over the years in Shanghai.

Finally, looking over the weather report for the weekend in Shanghai.  You've got cloudly skies and tempertures in the 60s throughout the four days.  Wind should not be a major factor during the tournament as they look to remain in the single digits.

One more reminder, the tournament is being played in Asia which means we've got a huge time difference.  According to DraftKings, their lineups will lock at 8:45pm ET on Wednesday evening.  Once again with another small field event, I'll be posting two gpp example lineups and avoiding cash games.  Those will be released at 2:30pm ET.

PGA Akshay Bhatia looks for a spark at the Wyndham

PGA Lanto Griffin takes a pass on the Wyndham

PGA Abraham Ancer a WD ahead of Wyndham Championship

PGA B. Koepka craters to T29 in failed 3-peat attempt

A. Bhatia - G
North Carolina resident Akshay Bhatia will play this week's Wyndham Championship via sponsor's exemption.
The 18-year-old was born in California but now calls Wake Forest, North Carolina home. Bhatia will be playing just 90 minutes from home this week. He made waves when he turned pro fresh out of junior golf instead of going to college. The transition hasn't been easy for Bhatia who is 1-for-8 across the world since the start of 2019. That one cut made was a T42 at the RTJ Golf Trail Championship on the Korn Ferry circuit. Perhaps a little home cooking this week can provide the career spark he's searching for, but he remains a high-risk longshot in any fantasy format. He's gained strokes on approach in each of his last two PGA TOUR starts but the rest of his game has yet to catch up.
Added Yesterday 4:05 pm (EST)
Added Yesterday 4:05 pm (EST)

L. Griffin - G
Lanto Griffin had a change of heart ahead of Wyndham Championship week, removing his name from the field on Monday morning.
Griffin styled three rounds of 68 at TPC Harding Park last week to go along with a third-round 71. That was good for a T19 finish at week's end. It was his 12th top 25 of the season which helps explain how is is 12th in the FedExCup race. He will rest this week ahead of his FedExCup Playoffs debut which will kickoff next week at TPC Boston.
Added Yesterday 3:48 pm (EST)
Added Yesterday 3:48 pm (EST)

V. Taylor - G
Vaughn Taylor continues to sit on the sidelines with a rib injury, removing his name from the field ahead of this week's Wyndham Championship.
Taylor withdrew from the Barracuda Championship and then the PGA Championship, both before his opening tee time. The 44-year-old sits at 70th in the FedExCup standings so he can afford to sit out until he's fully recovered. Gamers should recall that he missed four straight missed cuts before his recent run of WDs so gamers should make him prove a clean bill of health before reinvesting.
Added Yesterday 3:34 pm (EST)
Added Yesterday 3:34 pm (EST)

A. Ancer - G
Abraham Ancer has removed his name from the field ahead of this week's Wyndham Championship.
Ancer has been busy since the restart, piling up six starts without a single missed cut (24 rounds). His best finish over that stretch was a runner-up at the RBC Heritage which suits a similar style of play as this week's Sedgefield Country Club. At 13th in the FedExCup race, he can afford a week off ahead of the Playoffs. Gamers should expect to see him back in action next week at THE NORTHERN TRUST, at TPC Boston.
Added Yesterday 3:29 pm (EST)
Added Yesterday 3:29 pm (EST)