Drew Phelps explores every Fairway, reads every Green and uses his DFS Golf experience to put together a winning DFS Playbook for the Travelers Championship. 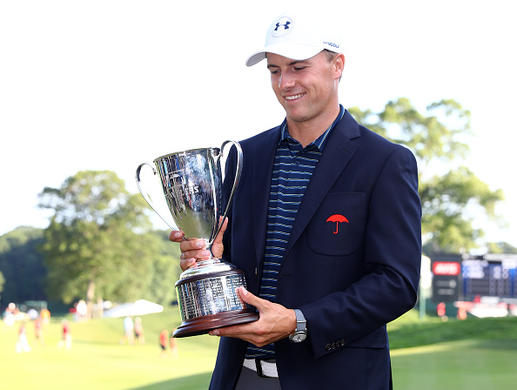 What a week at the U.S. Open! There is no way you can't feel good for a guy like Gary Woodland. He's been one of the good guys on tour for years and knowing what he's been through personally, to see him finally break through and win his first major on Father's Day, that's something special. I just wish I had some of him in my lineups but overall I had a lot of guys make the weekend, just not make a lot of noise because Chez Reavie. I was really proud of Chez holding up my DFS lineups all weekend long. But it is time to move forward to the Travelers. .

We’ve got a decent field in Cromwell, Connecticut with the likes of Brooks Koepka, Patrick Cantlay, Justin Thomas, Jason Day, Jordan Spieth, and others. If you don’t remember, TPC River Highlands gave itself a face-lift just before the tournament a few years ago. They removed 50 bunkers while upgrading the remaining 69.  Several trees were removed, fairways were narrowed, greens were redone and a whole lot more.  The course remained 35-35 for a Par of 70 and still measures out to just 6,841 yards.  They have added a lot of risk-reward opportunities for these golfers, which means the better course managers will have an added advantage this week.  There was a learning curve but they’re the best players in the world for a reason.

Despite all the changes to TPC River Highlands, it has still yielded a below par scoring average.  Just like U.S. Open courses, it is key to keep it on the fairway, but you can still go low at the Travelers if your scrambling game is on point.  Those who will contend should rank among the best on approach and around the greens.

The course is not a long one which means more short hitters can throw their hats in the ring this week.  This theory does go out the window when you see how dominant Bubba Watson has been in this tournament.  The key to victory this weekend is getting on the green in regulation and giving yourself as many birdie opportunities as possible.  I have filled the playbook with strong SG:TG (Strokes Gained: Tee to Green) players, these are the best ball strikers in the world.  I’ve also targeted proximity as well because what’s getting on the green in two if you are 30 feet from the cup.  Putting is always important and after the changes to the course, these bentgrass greens are already running 12 feet on the Stimpmeter.

Now, lets take a look at the playbook ...

PGA Akshay Bhatia looks for a spark at the Wyndham

PGA Lanto Griffin takes a pass on the Wyndham

PGA Abraham Ancer a WD ahead of Wyndham Championship

PGA B. Koepka craters to T29 in failed 3-peat attempt

A. Bhatia - G
North Carolina resident Akshay Bhatia will play this week's Wyndham Championship via sponsor's exemption.
The 18-year-old was born in California but now calls Wake Forest, North Carolina home. Bhatia will be playing just 90 minutes from home this week. He made waves when he turned pro fresh out of junior golf instead of going to college. The transition hasn't been easy for Bhatia who is 1-for-8 across the world since the start of 2019. That one cut made was a T42 at the RTJ Golf Trail Championship on the Korn Ferry circuit. Perhaps a little home cooking this week can provide the career spark he's searching for, but he remains a high-risk longshot in any fantasy format. He's gained strokes on approach in each of his last two PGA TOUR starts but the rest of his game has yet to catch up.
Added Yesterday 4:05 pm (EST)
Added Yesterday 4:05 pm (EST)

L. Griffin - G
Lanto Griffin had a change of heart ahead of Wyndham Championship week, removing his name from the field on Monday morning.
Griffin styled three rounds of 68 at TPC Harding Park last week to go along with a third-round 71. That was good for a T19 finish at week's end. It was his 12th top 25 of the season which helps explain how is is 12th in the FedExCup race. He will rest this week ahead of his FedExCup Playoffs debut which will kickoff next week at TPC Boston.
Added Yesterday 3:48 pm (EST)
Added Yesterday 3:48 pm (EST)

V. Taylor - G
Vaughn Taylor continues to sit on the sidelines with a rib injury, removing his name from the field ahead of this week's Wyndham Championship.
Taylor withdrew from the Barracuda Championship and then the PGA Championship, both before his opening tee time. The 44-year-old sits at 70th in the FedExCup standings so he can afford to sit out until he's fully recovered. Gamers should recall that he missed four straight missed cuts before his recent run of WDs so gamers should make him prove a clean bill of health before reinvesting.
Added Yesterday 3:34 pm (EST)
Added Yesterday 3:34 pm (EST)

A. Ancer - G
Abraham Ancer has removed his name from the field ahead of this week's Wyndham Championship.
Ancer has been busy since the restart, piling up six starts without a single missed cut (24 rounds). His best finish over that stretch was a runner-up at the RBC Heritage which suits a similar style of play as this week's Sedgefield Country Club. At 13th in the FedExCup race, he can afford a week off ahead of the Playoffs. Gamers should expect to see him back in action next week at THE NORTHERN TRUST, at TPC Boston.
Added Yesterday 3:29 pm (EST)
Added Yesterday 3:29 pm (EST)