Drew Phelps explores every Fairway, reads every Green and uses his DFS Golf experience to put together a winning DFS Playbook for the Waste Management Phoenix Open. 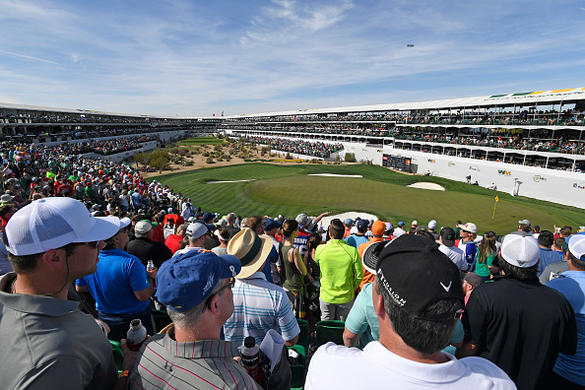 Despite watching Jon Rahm put up an opening round 62 at Torrey Pines, Justin Rose just bided his time and took the lead on Friday afternoon and never let it go. This is why Justin Rose is a major winner and the number one player in the world, nothing phases him. While it was beautiful to watch these golfers play along the pacific coastline this past weekend, none of that will compare to what happens in Arizona this weekend.

The Masters is my favorite event on the PGA Tour Schedule but coming in a close second is the Waste Management Phoenix Open at TPC Scottsdale.  This is not a major but it’s so much more than that. This is one tournament where golf fans get a chance to let loose and party during the event.  It all starts with the 16th hole, oh baby!  It is a Par 3 that is fully enclosed (the only one on the PGA Tour) by grandstands which can hold up to 20,000 crazy drunk fans.  The players walk out through a tunnel and are greeted by a roar from these rowdy fans. A roar erupts every time a ball lands on the green but when a ball falls short, the boo birds are out in full force.  I will never forget when Tiger Woods aced this infamous hole in 1997, it was one of the loudest cheers I’ve heard at any sporting event. It happened before the huge grandstands were even built and the legend of this hole seems to grow with every passing year.

Ok, let’s talk about the rest of the course.  It is a Par 71, and it stretches out 7,266 yards with 79 sand bunkers which are placed perfectly around the greens and on the fairways to truly punish these players.  There is also six holes with water, including three of the last four. The average winning score over the last few years has been around 18 under par which may make this course seem easier but it can easily bite a player in the ass.

When you look at the players who have had a lot of success at the Waste Management, they are all good GIR (Greens in Regulation) players from off the fairway.  If players can’t hit the fairway, you must look at players who are good scramblers and bunker players for success. Length off the tee is not huge advantage on this course but it doesn’t hurt either.  This is a ball striker’s course, which is you'll see Hideki Matsuyama and players of his like throughout my playbook.

This really is a fun event to watch, especially on TV when they feature the 16th hole.  Some players on tour really play up to the crowd and enjoy the adventure of that hole but there are always party poopers who just want to be done with that hole and forget it exists.  A lot of players avoid playing in this event just because of the rowdiness of the crowd, and I’m glad they do, who needs them anyway. I really feel like the PGA Tour needs to have more fun out of the box events like these to keep the youth of America interested in playing and watching the game.

ONE AND DONE PICK OF THE WEEK: Daniel Berger

LONG SHOT BET OF THE WEEK: Talor Gooch +8000 on Bovada.lv

PGA Rickie Fowler among notable MCs at the 102nd PGA

PGA Short game stays strong for Justin Rose in Round 2

T. Fleetwood - G
World No.13 Tommy Fleetwood birdied two of his final three holes to salvage an even-par 36-34=70 in Round 3 of the 102nd PGA Championship, falling five spots to T7 on 6-under 204, three short of 54-hole leader Dustin Johnson (65).
Playing out of the final twosome with overnight leader Haotong Li (73), the 29-year-old hit five (of 14) fairways and 13 greens in regulation, losing 0.580 strokes approaching but gaining 0.900 around-the-green. He was birdie-less 2-over thru 15 holes, squaring bogeys at 3 and 10 (penalty drop), before a couple of late birdie-3s at 16 and 18 brought him back inside the top 10. The Englishman, who fired a week-tying-low 64 on Friday, couldn't repeat the putting magic on Day 3 in San Francisco, ekeing out a 0.069 SG: Putting. He'll play out of the sixth-to-last twosome on Sunday with Daniel Berger.
Added Yesterday 11:49 pm (EST)
Added Yesterday 11:49 pm (EST)