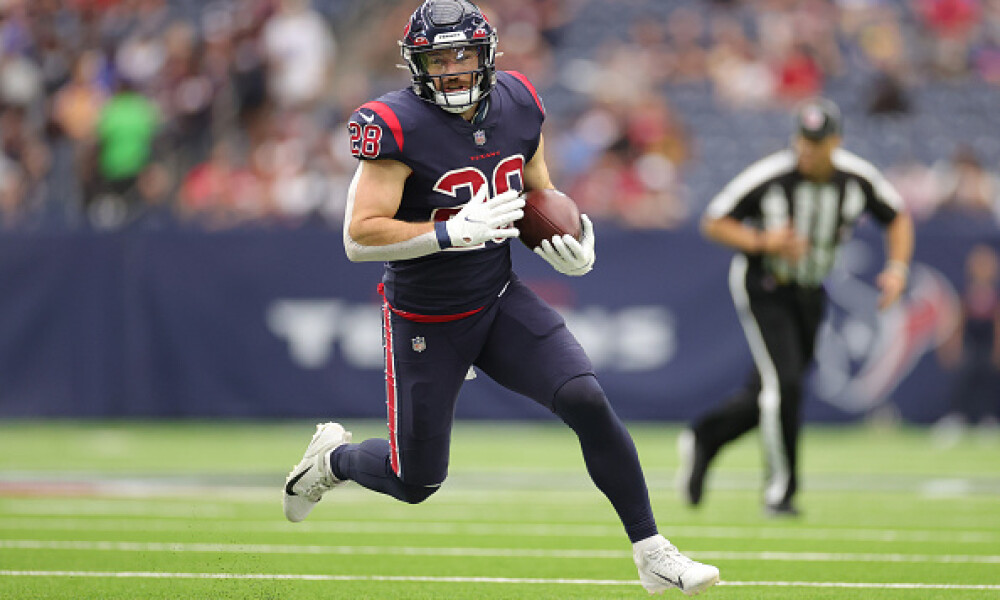 You may notice this week’s article is a little shorter than previous versions. It’s Championship Week so you aren’t in need of any long-term stashes and there’s little reason to hang on to, or even add handcuffs anymore unless the lead back is currently Questionable heading into next week. The players below are truly players that are available on waivers that you can not just roster in Week 17, but play them as well. So the smaller player pool is meant to help you consolidate your rosters with players you don’t need and identify players who can help you win this week so you can be crowned champion.

I will be back in the NFL Seasonal Discord chat Tuesday night. It’ll likely be from my usual 8:00pm-10:00pm ET but if it’s busy I can stay on a little later since it’s Championship Week. We have a lot of COVID news to monitor as well so I’m not going to be helpful in the start/sit department especially since there are no Thursday or Saturday games this week.

Justin Fields (CHI; FAAB Bid: 7%) If Fields is available in your league and you’re lacking confidence in players like Matthew Stafford, Russell Wilson, or you’re unsure if Lamar Jackson will return this week then Fields should be on your roster. He should return this for the championship round and the Bears face a depleted Giants defense that lacks any semblance of life at the moment. Fields has gradually gotten better this season and was finishing consistently as a top 12 quarterback in the handful of games prior to Week 16.

Trey Lance (SF; FAAB Bid: 5-6%) With the news on Monday that Jimmy Garoppolo has a thumb injury and will miss Sunday’s game against the Texans, then we naturally look to his replacement. Earlier this year when given the opportunity to start, Lance flashed some upside, but had significant accuracy issues. However, he has the confidence of the coaching staff and keep in mind he now has the full complement of weapons this time around. Houston has quietly been playing better as the season has progressed, but they still grade out as one of the best matchups on paper for quarterbacks.

Boston Scott (PHI; FAAB Bid: 20-30%) Scott is one of my preferred waiver wire targets this week. Miles Sanders has a significant hand injury that’ll cost him an appearance in Week 17. Scott led the way with 41 rushing yards on 12 carries and he found the end zone. Jordan Howard got a little extra run as well, but he also sustained an injury. As always, it’s too early to tell his status for Week 17 but take solace in the fact Scott will get more work this week. Philadelphia draws the Washington Football Team who were just decimated by Dallas on Sunday night.

Rex Burkhead (HOU; FAAB Bid: 20%) Burkhead has easily become the lead running back in Houston toward the end of the season as evidenced by his 15+ touches in three straight games. He only has three touchdowns on the season and two of them came Sunday against Los Angeles. But the workload has been there and Rex and the offense have seemingly hit a groove the last two weeks. He rushed for 149 yards and a pair of touchdowns against Los Angeles, but the Texans get a slightly more difficult matchup this week as they visit San Francisco.

Cam Akers (LAR; FAAB Bid: 10-15%) There are a few things worth noting with Cam Akers so I’ll try to keep this as succinct as possible. For starters, I don’t think he’ll play a significant role in the regular season, but with Darrell Henderson Jr. hitting IR then it opens the door for Akers to get some work heading into the playoffs. I added him in a few leagues, but those were keeper leagues or very deep leagues. I don’t think he’ll have a drastic impact for fantasy especially with how well Sony Michel has played lately. Again, he only appears this high in the running back section if you have a spot to stash him in keeper leagues or deeper formats. Do not expect him to help you win your league this weekend. He’s five months removed from tearing his Achilles so be a little realistic with what you should expect.

Dare Ogunbowale (JAC; FAAB Bid: 10%) I don’t think I’d start D.O. in anything other than a deep-league format, but with James Robinson’s Achilles injury on Sunday, D.O. came in and rushed for 72 yards and a touchdown. This week the Jaguars have to go to New England and rain is in the forecast so the game could be a little sloppy. However, New England’s run defense has been somewhat weak in recent memory and add in the fact that Matthew Judon hit the COVID/Reserve list on Monday and we find ourselves in a spot where we can possibly flex D.O. for a championship in Week 16.

Honorable Mention(s): If Darrel Williams is available in your league then he should be rostered heading into next week. Obviously the news regarding Clyde Edwards-Helaire’s collarbone is concerning and he’ll miss Week 17, which is a bump to Williams. But be mindful that this doesn’t automatically make him a three-down running back so I don’t think he’s a must-start either. Derrick Gore will likely get 10+ touches against the Bengals as well so he’s worth rostering in deeper formats.

K.J. Osborn (MIN; FAAB Bid: 12-14%) Here we are once again with “Adam Thielen Watch.” Thielen returned from a two-game absence but was forced out again before halftime against the Rams this past week. Week 17’s matchups against the Packers isn’t a slam dunk, but Osborn slides into Flex consideration if Thielen misses this week’s game. Osborn didn’t do much with the opportunity during Thielen’s absence, but given the circumstances surrounding players getting hurt or landing on the COVID/Reserve list, then Osborn should at the very least be rostered in about 60-70% of leagues.

Allen Lazard (GB; FAAB Bid: 10%) The logic is simple: If MVS sits, then Lazard gets a significant bump. With MVS out of the lineup Christmas night, Lazard ran a route on 94% of Rodgers’ drop backs and the Packers wideouts get a plus-matchup this week against the Minnesota Vikings who grade out as one of the best matchups for opposing wide receivers. Lazard hasn’t commanded a significant target share but he has found the end zone in two of his last three games.

Kadarius Toney (NYG; FAAB Bid: 7-8%) Toney is a very frustrating player because we’ve already seen this year he’s had issues staying on the field. However, when he’s been healthy and active he’s an easy target for whoever is playing quarterback for the New York Giants. Toney ran less than 30 routes on Sunday and saw nine targets. That’s an unsustainable rate, but if he’s getting open that much then he’s going to warrant some frustrating Flex consideration.

Isaiah McKenzie (BUF; FAAB Bid: 5-6%) McKenzie was the beneficiary to Cole Beasley and Gabriel Davis being out due to COVID protocols. As it stands right now it looks as if both players will once again miss Week 17 against Atlanta and the Falcons make for a defense that you can easily move the ball against. How much will Buffalo have to pass? It remains to be seen, but McKenzie should see about four-to-six targets even with Dawson Knox, Stefon Diggs, and Emmanuel Sanders still on the field. McKenzie isn’t an easy lock and load. We’ve seen flashes from him before, but there were also reasons why he was buried in the depth chart behind the other pass catchers.

Josh Palmer (LAC; FAAB Bid: 5%) The Chargers were a significant disappointment in their loss to Houston, but Palmer provided some production. Palmer has scored in two of his last three games and the significance of those games comes from the fact that either Mike Williams or Keenan Allen were absent. Williams is expected to miss Week 17’s game against Denver due to COVID protocols so we could once again be looking at five-to-seven targets for Palmer and we know there’s the possibility he scores.

Cole Kmet (CHI; FAAB Bid: 10%) I’ve been hyping Kmet for a few weeks and while the ceiling isn’t great, he’s been involved in the offense enough to warrant rostering and even starting in some leagues. Kmet’s been running more routes and even without Justin Fields, Kmet still had four catches last week. Fields should return for Week 17 against the Giants and that bodes well for Kmet.

Mo Alie-Cox (IND; FAAB Bid: 7%) M.A.C. is a favorite of mine in DFS Showdown contests, but this week he garners some attention in season-long leagues. Jack Doyle got hurt last week, which was a bump to Alie-Cox’s value as he was running more routes on Carson Wentz’s drop backs. It only translated to two catches for 42 yards, but the four targets were the most he had seen since Halloween. The Colts draw the Raiders in Week 17 and they grade out as one of the best matchups on paper for opposing tight ends.

Philadelphia Eagles – I’m seeing the Eagles are available in about 35% of leagues on ESPN and if that’s the case they may be one of my favorites D/ST’s to stream this week. They’ve returned at least five fantasy points in six straight matchups and since Week 5 they’ve returned double-digit fantasy points five times. We saw how inept the Washington offense looked Sunday night and there’s no reason to believe the Eagles can’t have another dominant defensive game in Week 17.

Chicago Bears – The Bears should have a good enough floor this week where they can return six-to-eight fantasy points. They visit the Giants who will likely be starting either Mike Glennon or Jake Fromm once again and the Giants offensive line is still terrible. The Bears are averaging three sacks per game over the last three weeks and we’ve seen them collect five on a few occasions. The over/under for this game is embarrassingly low at 37.5 points and the Bears are six-point favorites. This is an easy streamer this week.

Carolina Panthers – I’ve been of the mindset for a while now that the Panthers have a good defense. And that’s true in the sense they’re good for actual football, not necessarily fantasy. They don’t give up a ton of passing yards (182.3 per game) and they’re good for a couple sacks as well. This bodes well in a matchup against the Saints, who have struggled on offense. The media has implied that Taysom Hill is not vaccinated so that puts his status for this matchup in doubt. If the Saints are left to once again start Ian Book or Trevor Siemian then the Panthers make for a great streaming D/ST this week.