Colby Conway delves deep into the science of Average Draft Position this draft season, giving you weekly updates on players and their ADP across a variety of fantasy formats. 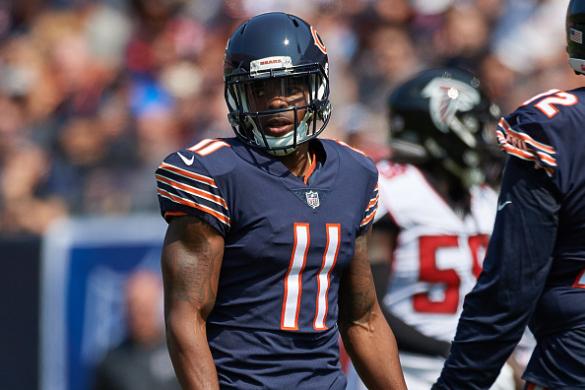 Without further ado, let’s get into it, talking some trends in the average draft position of some noteworthy fantasy assets, and this week, it’s wide receivers aplenty! Aaaanddddd…… Here we go! 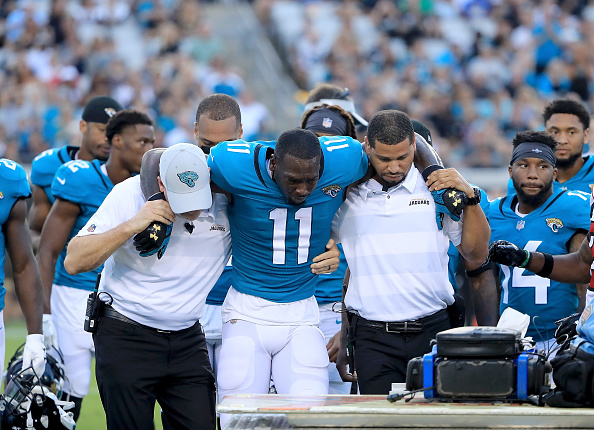 If you didn’t see the injury, watch at your own risk. It’s gruesome, and by no means am I a doctor, a multi-ligament injury is likely the scenario for Lee, and his 2018 injury is in jeopardy, to say the least. This is [likely] the second year that the Jaguars will endure a [likely] season-ending injury to one of their projected starting wide receivers. Last year it was Allen Robinson , and now this year likely with Lee. However, as fantasy players, we need to project who is, or could be, the top guy in the Jacksonville passing attack. Personally, I like Dede Westbrook as a talent, but Keelan Cole seems to be the guy that could really explode after this news. Cole was a trendy pick beforehand, but if your league hasn’t drafted yet, get ready for Cole to pop off the board at least one round earlier.

In three games without Lee on the field last season, Cole averaged 5.67 receptions for 109 yards per game. Furthermore, Cole averaged 10 targets per game when Lee wasn’t on the field last season. Cole has big play written all over him and in a Jacksonville offense that will likely create big plays off play-action passes, Cole can get behind the defense and make noise in the Jacksonville passing attack, even with Blake Bortles under center.

Cole’s current ADP is 164.95 in best ball formats and I expect him to cost more draft capital in the drafts to be had in the coming days. He’s less of a sleeper than he was a few days ago, but he’s a guy worth drafting this year, especially if the volume carries over from the Lee-less games in 2017.

The Chicago Wide Receiver No One Is Talking About

Allen Robinson is attracting a lot of hype, and will certainly see plenty of top corners from the opposition. Anthony Miller looks electric out of the slot. However, there is a guy in Chicago who is still looking for his first productive season in the National Football League, and I’m not talking about Javon Wims . It’s a guy by the name of Kevin White . Remember him? White was a first round draft pick after catching 109 passes for 1,447 yards and 10 touchdowns as senior for the Mountaineers of West Virginia.

When healthy, he can be a solid second wide receiver for most teams in the National Football League. Did you see his touchdown against Orlando Scandrick this past week? If not, do yourself a favor and take a look. His hesitation and stutter step put Scandrick on skates, leading to an easy pitch and catch for six.

White’s current ADP of 269.17 in best ball is pennies! You can have him for nearly 200 picks after Robinson, and if you want an upside play in the Chicago passing attack without investing too much, why not take a stab at White? On seven targets this preseason, he’s caught four balls of 48 yards and has 18 yards after the catch. The 2018 campaign could ultimately end with another injury like the previous few seasons, but if not, watch out… 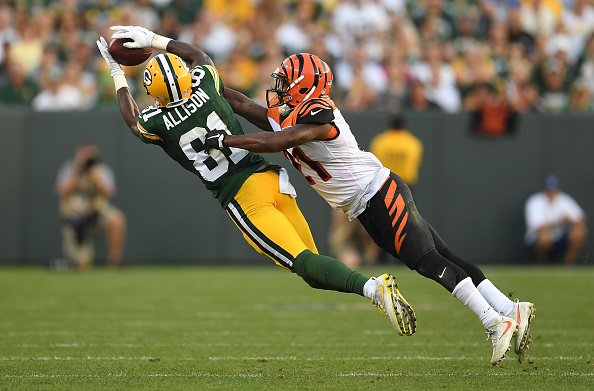 Randall Cobb trade rumors have surfaced, and whether or not they come to fruition, perhaps Cobb isn’t even the number two wideout there anyway. Maybe the second horse in this brigade is Geronimo Allison . Allison wasn’t superior in any game last season, but when Davante Adams or Cobb missed time, it was Allison that took the majority of the snaps with the first team. Alllison’s fantasy output nearly tripled when Cobb was out of action last season.

In best ball formats over at RTSports, Allison is going roughly 133 picks after Cobb, but if Cobb were to be traded, just how valuable is the No. 2 wide receiver in a passing attack led by the uber-talented 34-year-old Aaron Charles Rodgers? It’s evident that Rodgers has “his guys” and when he builds that rapport with them, the gunslinger is going target those guys often. Reports state that the trust between Rodgers and Allison are growing, which would be exponential to an Allison breakout campaign in 2018.

Albeit a bit of a stretch, this is one of those upside selections in deeper formats, especially best ball. When drafting a sixth or seventh wide receiver, why not go for a guy like Allison? It may be another ho-hum year for him, but the potential is there if things work out for the 24-year-old wideout. He’s worth a flier in the later rounds of deeper formats.

C. Newton - QB
NE
NFL Network's Ian Rapoport reports the Patriots are "confident" in Cam Newton's physical condition.
Newton is currently in town to take his physical. Rapsheet claims "no issues at all are anticipated." Newton's foot is what cost him 2019, but we would assume his troublesome shoulder is the bigger physical concern. Those twin ailments are the reason Newton lingered on the market until late June, though the COVID-19 pandemic undoubtedly dragged the situation out longer.
Added 2:30 pm (EST)
Added 2:30 pm (EST)