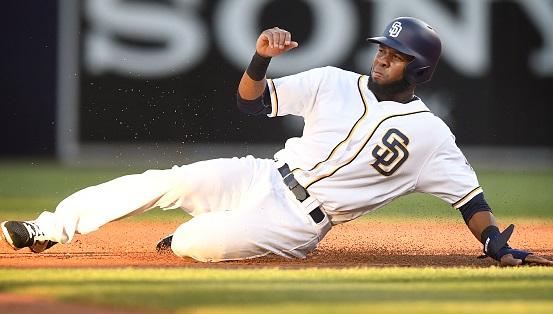 Margot currently ranks as the No. 23 prospect in all of baseball and is competing for a starting job in the San Diego outfield. Margot brings a lot of talent to the table and the San Diego faithful should love the long-term prospects of a Hunter Renfroe and Margot-led outfield.

Let’s start by addressing Margot’s most obvious strength: speed. On the 20-80 scale, his run grade was a crisp 70. In case you aren’t sure what that means, it means that the kid can fly! In 466 minor league games, he stole 162 bases and was caught 56 times, good for a 74.3 success rate. In 10 games with the Padres last year he was a perfect 2-for-2 on the basepaths. He’s only continue to develop on the basepaths and at some point in his career, he’s going to compete for the league lead in steals.

Margot checks in at 5-feet-11-inches and 180 pounds when soaking wet, but don’t let that fool you, because he has plenty of strength for his frame. For his minor league career, his 29 home runs in 466 games won’t drop your jaw, but the 91 doubles and 35 triples certainly aren’t bad to look at. He won’t become a big time slugger, but he can drive the ball all around the field, which should certainly inflate his doubles and triples. In just 10 games with the Padres last year, he smacked four doubles and a triple. Margot homered once every 62.8 at-bats in the minors, which puts him near the 2016 versions of Elvis Andrus and Jacoby Ellsbury. The 22-year-old may only leave the yard 8-12 times this season, but all of that is bonus on top of what could amount to upwards of 40 stolen bases.

Albeit a brief sample size, Margot showed his ability to hit the ball and hit it hard. He posted a contact percentage of 84.3 and made soft contact just 23.3 percent of the time. Margot generated hard contact 40 percent of the time, and medium contact 36.7 percent of the time. Sure, he likely won’t sustain those numbers for the entirety of the grueling baseball season, but even a steep regression to a 32.5 percent hard-hit rate is on par with guys like Adam Jones, Jose Abreu and Stephen Piscotty.

Margot projects to hit at or near the top of the order, and for his game to take another step down the road, he’s going to need to improve upon his low walk rate. The league average was 8.2 percent last year. Margot hasn’t topped that mark since playing 99 games at A-ball in the Red Sox organization. His walk rate of 6.4 percent in 124 Triple-A games isn’t too far from the league average, but when a guy hits .304 like Margot did at the Triple-A level, one would hope for a OBP above .351. In 37 plate appearances with the Padres at the end of the 2016 campaign, Margot failed to draw a single walk, while posting an uninspiring 18.9 strikeout percentage.

While Margot boasts some top-notch speed, he isn’t as successful on the basepaths as one would hope. His 74.3 percent success rate for his minor league career isn’t ideal for a guy of his speed, but certainly, it could be worse. In 2016, stolen base leaders Jonathan Villar, Billy Hamilton and Starling Marte posted success rates of 77.5 percent, 87.9 percent and 79.7 percent respectively. Margot was a perfect 2-for-2 in 10 games last year, so he does have that going for him.

Margot’s speed is extremely valuable to the San Diego offense, but it’s a huge plus on the defensive side of the ball. He will be a plus-defender for his career and that will help him remain in the lineup during a prolonged slump. It’s hard not to like where Margot is heading and as they say, speed kills.

He may require a DL stint earlier in the year just to make up some lost time due to a leg/knee injury during camp, but when he returns, San Diego must get him in the lineup. The projections on Margot are fairly similar across the board, but one thing is crystal clear, and that is the fact that Margot is going to run plenty in 2017. Let’s look at some of his projections over at Fangraphs.

Of course, the fans are a bit overzealous about Margot’s 2017 outlook, but can you blame them? He can generate hard contact, he runs extremely well and should hit near the top of the San Diego lineup. Given his ADP, he’s a steal and if he’s still available in your league, and you have a need for speed, Margot is your guy.

Renfroe will deliver the power in San Diego, while Margot brings the speed.