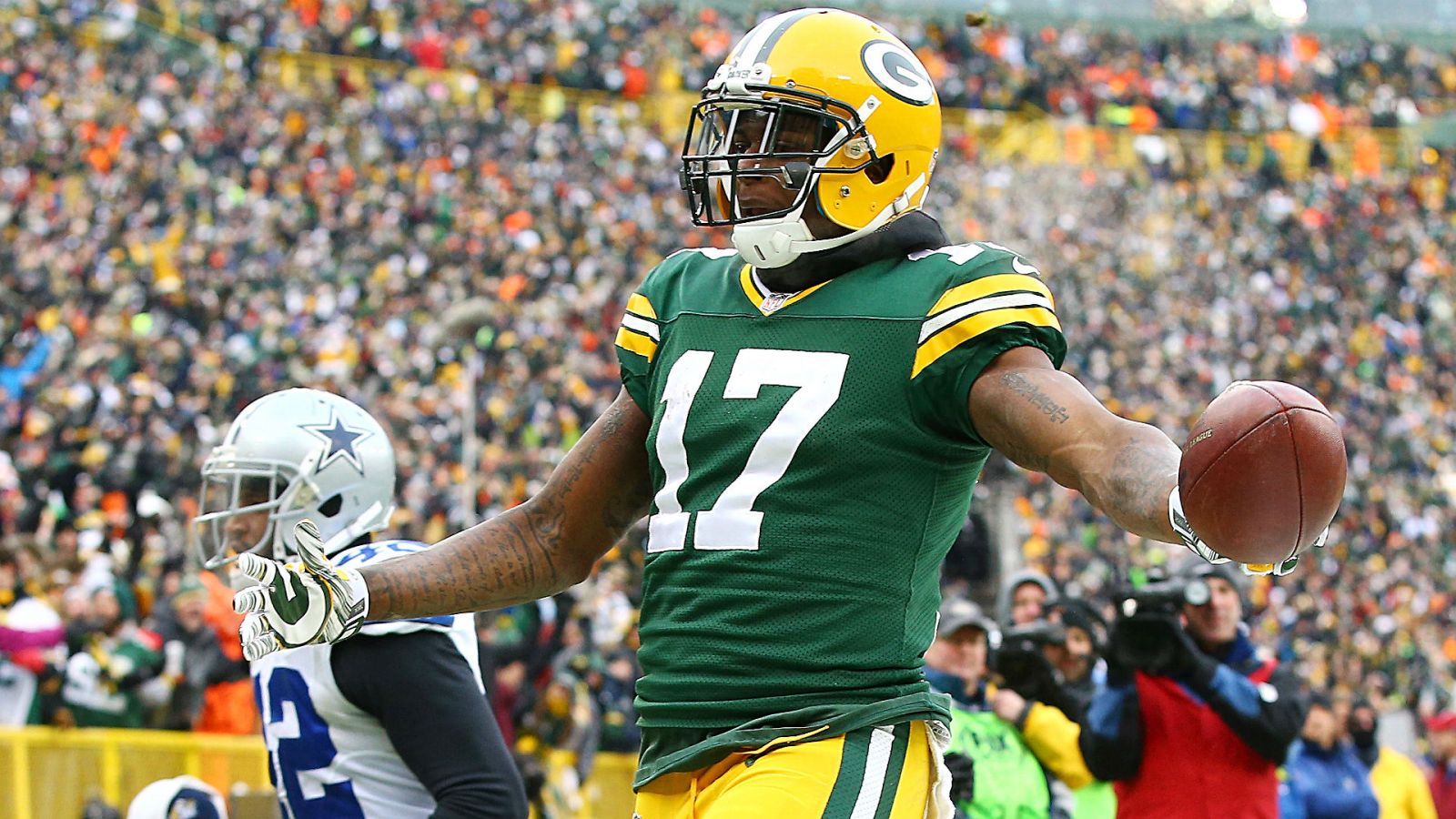 Pluses – Coming into the season, he was going to be the team’s No. 3 receiver and probably a WR4 or WR5 in fantasy football at best. However, Sunday Aug. 23 rolled around, a day many Packer fans won’t forget. Star wide receiver Jordy Nelson tears his ACL on the opening drive against the Pittsburgh Steelers and will miss the entire 2015 season. In fantasy circles, Davante Adams shot up the board with reckless abandon. Adams was the eighth receiver selected in the 2014 NFL draft after an incredible redshirt sophomore campaign at Fresno State. He played in a pass heavy offense with Derek Carr at and the numbers he put up in 2013 were astounding. The

wideout led the country with 131 receptions and 24 touchdowns while his 132.2 receiving yards per game was second in the country. When he left Fresno State, here is what he took with him: Two All-America selections, 2013 Paul Warfield Award, Two-time first-team All-MWC, 14 Mountain West records and 11 Fresno State records. He came to the NFL with people raving over his ability to jump and his reliable hands. Last season for the Packers, he tallied just two drops on 66 targets. There are those reliable hands people were raving about when he entered the league. A big reason why everyone now loves Adams is mainly because of the team he is playing for and his prolific quarterback, Aaron Rodgers. Seeing that he will be the team’s No. 2 receiver this season with Rodgers as his quarterback, what isn’t there to love? In the last 10 years, dating back to 2005, the Green Bay Packers have finished as one of the top 10 passing offenses each season. With Rodgers at the helm of the offense, the unfortunate injury to Nelson has opened an immense amount of fantasy potential for Adams in 2015.

Minuses – While everything is lined up for Adams to have a breakout season, nothing is guaranteed in the National Football League. Just because everything is lined up for a player, that doesn’t mean that success is assured, e.g., 2013 Doug Martin, 2014 Bishop Sankey. In fact, all the hype that has surrounded Adams has driven his average draft position (ADP) through the roof. After Howard Bender’s first Mock Draft Army write up, Adams had an ADP in PPR leagues of 156.6. In the last week and a half, his ADP in PPR leagues is 52.6. He is going a whole 104 spots higher due to Nelson’s injury. In a 12-team league, Adams is going early in the fourth round. With that being said, don’t you think that might be a tad steep for a player with only 38 career receptions under his belt? Sure, his college numbers were exceptional to say the least, but the Mountain West Conference is nowhere near the National Football League, obviously. Based off last year’s numbers, his 11.7 average yards per catch would have placed him outside the top 70 receivers in the league. If that be the case again this year, he is going to need a high volume of targets, however, with all of the recently available targets, it could end up being the norm for the second year wide receiver. If Randall Cobb continues to do the majority of his damage from the slot, Adams would be the team’s top option on the outsides. If the defense doesn’t use their top corner in the slot, it would likely mean that it would be Adams drawing the opposition’s top defensive back. Some teams will put their cover corner on Cobb in the slot, but some will choose to let their best cornerback stay where is comfortable. If that ends up happening, Adams could have some struggles getting open.

Summary – There is no doubting that the injury to Nelson has dropped immense fantasy value into Adams’ lap. However, it can’t be stressed enough that there is nothing guaranteed in the NFL. He’ll easily surpass last year’s numbers, barring any injuries, of course. Also, it’s worth noting that he should see a good amount of red zone targets for the team this season. Even though the official roster has him standing at 6-feet-1-inch, he plays much taller than that. Like many wide receivers and tight ends, he has basketball experience in his background and you can find videos of him dunking as if he was in the NBA Slam Dunk Contest. Everything seems to be in line for a big season for Adams, but given his small sample size, he’s far from a sure thing. As alluded to earlier, his ADP is skyrocketing, so while he could make for a great pick, make sure you don’t reach too far from him.