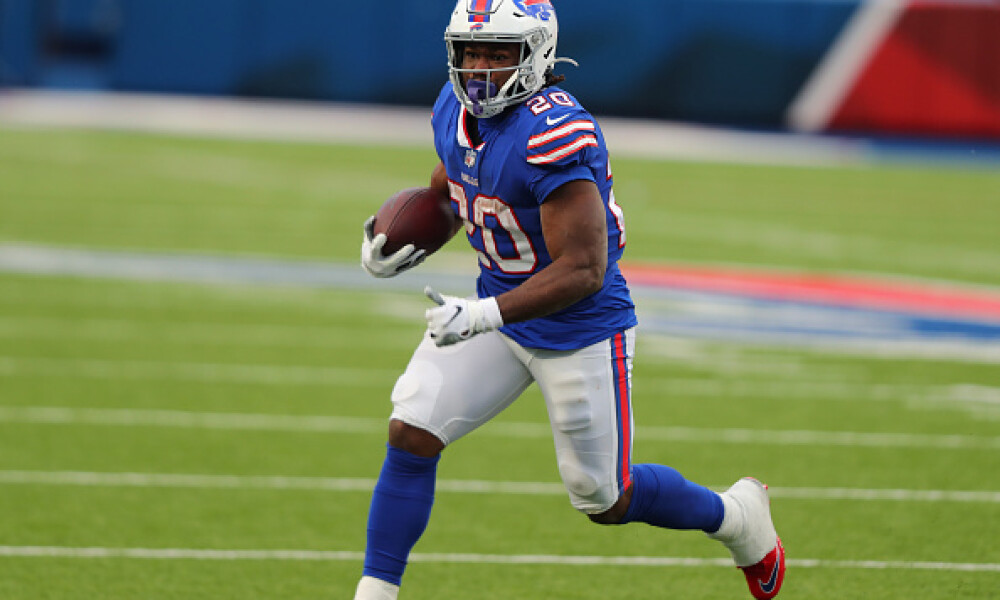 It wasn’t the most dominant rookie season for Buffalo running back Zack Moss. He missed three games during the regular season, and then appeared in just one of the team’s three playoff games due to a rough high ankle sprain. In 13 regular season games, he carried the ball 112 times for 481 yards with four rushing scores, and he caught 14-of-18 targets for 95 yards and one receiving touchdown. He had ankle surgery in the offseason and reports from camp are that he’s feeling better each day, although not quite being at his peak strength yet. Devin Singletary is still around and the team brought in Matt Brieda to boost the running back room, but does Moss have the juice to solidify himself as the RB1 for one of the league’s more prolific offenses? Fantasy managers sure hope so.

Singletary was able to play in all 16 games last year, and he wasn’t anything overly spectacular. He took 156 carries for 687 yards and two touchdowns, but he was the team’s pass catching back, as he hauled in 38 of 50 targets for 269 yards. When both Moss and Singletary were playing, the roles were relatively well defined. Singletary and Moss split carries and Singletary took the majority of the receiving work. For what it’s worth, Moss did have more targets in the lone playoff game he appeared in. However, Moss was the team’s goal line back, which we all know is money in fantasy, especially on good offenses.

Overall in the red zone last year, Moss handled the most carries, despite missing three games due to a toe issue. Here was the breakdown for the main three ball carriers in the red zone for Buffalo:

Albeit a pretty equal split, take into account that Moss missed three games. Also, he was far more effective than Singletary in the red zone, which is critical. If we look at just the weeks that Moss was playing, you start to see some separation and clear delineation with player roles:

If Buffalo was losing, Moss took a backseat to Singletary, as the latter was deemed the pass-catching back. It was pretty evident in the splits for Moss, too.

It’s not an ideal scenario, but fortunately, Buffalo is an incredibly good football team that will win plenty of football games, and let Moss pound the rock to bring home the W. So, enough about last year, where’s the upside for Moss in 2021? Assuming he’s fully healthy for the season following the offseason injury, which it seems like will be a non-issue, there are two main things that I’m looking at as reasons for optimism for Moss in 2021.

Do the numbers below mean anything to you?

They should. Those are the rushing attempts and rushing yards per game for Josh Allen. He’s running less and it is not an accident. Yes, he’s still going to be involved around the end zone and he’ll get his rushing touchdowns, but it’s no coincidence that his attempts and yardage, on a per game basis, have trailed off each of the past two seasons. Allen’s mobility and threat to run is an imperative part of the offense, but Buffalo will likely focus on the overall quality of his rushing attempts, compared to the overall quantity.

Secondly, Buffalo showed us last year how much Moss means to its running game. I’ll show it to you in two different ways. First off, they made a concerted effort to run the ball more when Moss was healthy.

In conjunction with the play calling, it showed in the overall statistics.

Overall, Buffalo averaged the 20th-most rushing yards per game in 2020. Their pace with a healthy Moss would have had them at 16th, which is league-average, but their pace in games without Moss would have ranked 31st, besting only the Pittsburgh Steelers from last year.

His overall ceiling in PPR formats could be capped with Singletary and Matt Brieda in the mix for targets, but like I mentioned, in his lone playoff game, he did receive more carries and targets than Singletary. Brieda is going to be involved, primarily in the passing attack, but as of right now, Moss is the RB1 for the Buffalo Bills, and that is lucrative. He’s going to get the majority of the carries and will be the preferred option at the goal line.

At time of writing, he’s the 39th running back off the board, making him a RB4, which is perfect for fantasy managers. In a shared role last year, including minimal receiving work, he was the RB47, RB45 and RB43 on a fantasy points per game basis in a PPR, 0.5 PPR and standard setup respectively, per RotoViz. There’s significant upside with Moss in 2021, and it only grows with the stronger grasp that he gets on the backfield duties.

His red zone usage alone for one of the more explosive offenses in the league is valuable in and of itself, but Moss should be a RB3 this year, and cement himself as the running back to own in Buffalo.