NFL Week That Was: Week 9 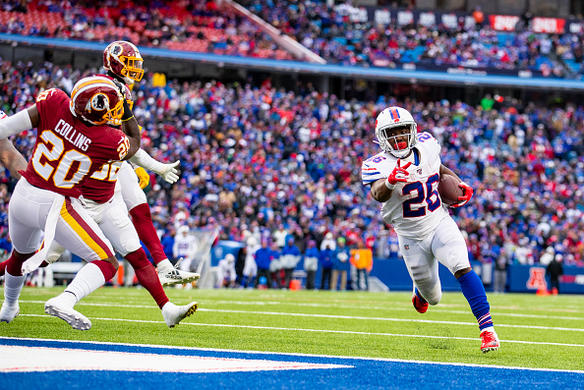 Devin Singletary :  He finally had that game fantasy owners have been waiting for Sunday by rushing for 95 yards and a touchdown, while adding three grabs for another 45 yards.  That is a sweet 23 PPR points in most settings.  More importantly, Devin out-touched future HOF Frank Gore 23-11.  To put a fine point on it, Singletary got more touches Sunday than he did in his last three games combined.  Yep, combined.  With Cleveland and Miami next up on the schedule, Singletary has a lot of near-term upside for a player that others may still undervalue.  Put out some feelers in your league if you do not own the Buffalo rook.

Preston Williams:  Williams had a big day, and was a big reason the Fish are no longer winless.  Preston reeled in five catches for 72 yards and two touchdowns.  With Ryan Fitzpatrick under center, both Williams and DeVante Parker should get looks from fantasy owners.  That said, if you have to choose one, go with Williams who lead the team in targets and who seems to have become the guy Fitz targets when the chips are down.  With the Jets, Giants and Bengals on the schedule for playoff weeks, Williams could be a hot commodity come playoff time.  [Note – just be careful to check the news on the knee issue that forced him from the game late].

Melvin Gordon :  This week he returned to being, well Melvin Gordon .  The Chargers running back carried 20 times for 80 yards and two touchdowns.  He also chipped in three grabs for 29 yards. In total, that is almost 26 PPR points.  Nice.  I think people have been too hasty to write Gordon off after the hold out.  Now in his fifth week, he is in rhythm and in the flow.  With Oakland and Kansas City on the schedule next, Gordon is back to being plug and play.  Remember, this is a 26-year-old running back who has 28 touchdowns over the last three years.  There is no reason to think he is anything but at the height of his career.  Buy.

Matthew Stafford :  The Lions have clearly decided they cannot run the ball without Kerryon Johnson .  Bad news for the team.  Bad news for those who spent on Ty Johnson on the waiver wire. Good news for Matthew Stafford ’s fantasy owners.  The Lions quarterback lit up the fantasy scoreboard Sunday throwing for over 400 yards and three touchdowns (and added six yards rushing).  It looks like Stafford is leaving 2018 in the rear view mirror.  Taking 2018 out of the equation, Stafford has seven straight 4,000 yard seasons. He is well on the way to another this year, having already thrown for over 2,000 yards in seven games.  Ordinarily, I would warn you about next week with Chicago on the schedule.  However, after watching the Bears play uninspired football again Sunday, I say fire up Stafford and let it fly.

Noah Fant:  Last week we wrote: “The Broncos’ rookie TE did not light up the scoreboard posting five catches for just 26 yards.  However, with Emmanuel Sanders now in San Francisco, Fant lead the Broncos in targets with eight.  The Broncos are not good but Fant is.  They should use the remainder of 2019 to try and figure out exactly how good he is and could be.  If this week is any indication, they are doing exactly that.  Fant is definitely worth a speculative bid and stash.”  Well, the Broncos did get Fant involved and Noah delivered!  Specifically, Fant delivered three catches, 115 yards and a TD for a sweet total of over 20 PPR points.  If Fant is somehow sitting on the waiver wire, pick him up this week during the bye week before others focus on the rookie tight end from Denver.

Final Note:  Take note of what happened with Adam Thielen this week.  Yes, sometimes guys are game time decisions and perform.  However, many times, they are not 100% or get re-injured.  My advice, rely on those game-time decision guys only when you have to.  Those who relied on Adam Thielen or Chris Herndon this week or Dede Westbrook last week learned the hard way.

D. Chark - WR
JAC
New Jaguars OC Jay Gruden plans to feature D.J. Chark all over the formation, including the slot.
It is standard summer coachspeak. This might not necessarily mean anything different for Chark, who ran 24 percent of his routes out of the slot last season. Regardless of what Gruden says, he will be a big upgrade as a schemer for Chark. The Jags featured some of the league's least-imaginative play-calling in 2019.
Added 1:55 pm (EST)
Added 1:55 pm (EST)