NFL Week That Was: Week 2 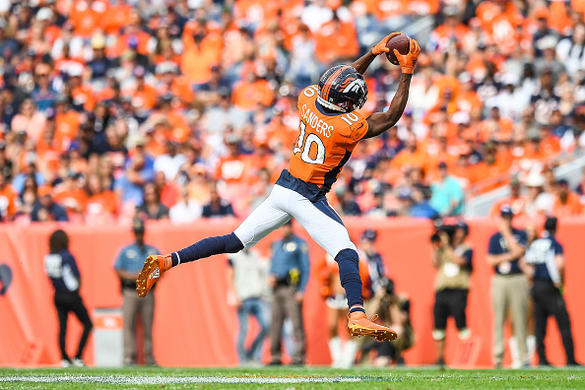 Some running backs and wide receivers whose value may be depressed highlight this week’s NFL Week That Was.

David Montgomery , RB CHI:  David Montgomery carried 18 times for 62 yards and a touchdown. That is hardly world-beating.  The good news – he will be undervalued for those looking to make a deal. While 18 is not a huge number of carries, it is compared to the seven combined carries for Mike Davis and Tarik Cohen last week and the six carries Monty received in Week 1.  The bottom line here is that Montgomery will continue to get more and more work as the season moves progresses. Memories are short in fantasy football. People forget the Bears dealt Jordan Howard to make room for Monty. You should not forget and make a deal of your own.

Carlos Hyde , RB HOU:  Carlos Hyde toted the rock 20 times Sunday for 90 yards and a solid 4.5 yards per carry.  Oh, and Duke Johnson got only 6 carries. It does seem as if Hyde has become the main back in Houston.  Can he continue to see some success? Yes, but only in deep leagues and he will be more valuable in non-PPR.  Why am I not sold? First, Hyde was not targeted in the passing game Sunday, and has been targeted only once in two weeks.  Second, he has the tough Chargers front to deal with next week. I like the idea of streaming Hyde especially in bye weeks but not relying on him to play every week.

Emmanuel Sanders , WR, DEN:  Emmanuel Sanders lit it up Sunday catching 11 balls for 98 yards, a touchdown, and a two-point conversion.  There were a lot of questions about whether Sanders could recover from injury and return to form. Questions no more.   Joe Flacco threw the ball 50 times in a game where they did not need to abandon the run. If Joe Cool is throwing, Sanders is the guy who will be on the other end more than anyone else.  People will still be doubting Sanders and may think they are trading high. Act now before people realize he is actually a solid, every week receiver.

Aaron Jones , RB, GB:  Aaron Jones lit up the fantasy scoreboard Sunday rushing 23 times for 116 yards and a touchdown (and adding 4 grabs for 34 yards as well).  That is a solid 21 point day. More importantly, it shows how good Jones can be as the lead back in Green Bay. Do you think that defenses can stack the box against Aaron Rodgers ? Uh, no.  Jones is a guy who averaged 5.5 yards per carry each of his first two years. Now, as the undisputed RB1 in Green Bay, only health can stand in Jones’s way of becoming a top 10 RB by season’s end.

Sammy Watkins , WR KC:  Sammy Watkins came back to earth Sunday catching 6 balls for 49 yards.  The great Sammy roller coaster continues its ride! So, what to do? Well, Sammy was targeted 13 times, does have Patrick Mahomes and is the WR1 for a few more weeks at least.  I am buying and I bet many Watkins owners are tired of the roller coaster and are selling. If so, act now! If Mahomes throws the ball to Sammy 10+ times a game as he has the last two weeks, the points will come.  Many of them.

Dak Prescott , QB, DAL:  Last week, we wrote: “How ‘bout them Cowboys?  Travis Frederick back at center, Jason Witten back as a safety blanket, and new weapon in Randall Cobb .  Oh and a porous Giants D on the other side. Christmas in September! Well, Dak took advantage to the tune of 405 yards, 4 touchdownss and no interceptions.  I am not so sure Kellen Moore is the now boy-genius of the NFL after just one game of play-calling. However, what I did see however, was Dak calmly going through his progressions when the play was not there and throwing the ball before receiver breaks on quick hitting passing plays.  With dates against Washington and Miami on the slate next, Dak will be a QB1 for me.” Boy did Dak deliver. 26-30 for 269 and three TD in the air and another 69 yards on the ground against Washington. Consider this, Dak has completed 51 of 62 passes, has a great offensive line, Zeke, and the Fish coming to town next week.  Sign me up!

Final Note:  I hated seeing the injuries to Big Ben and Drew Brees .  First and foremost, I hope they heal quickly and get back out there.  It is fun to watch the Hall of Fame QBs. That said, in fantasy football, one has to devalue JuJu and Michael Thomas some.  More importantly, I would really downgrade the WR2 on both teams. With Teddy Bridgewater and Mason Rudolph at the helm, there will be many more runs than when the guys headed for Canton are running the show.