Fantasy Baseball The Week That Was: July 29 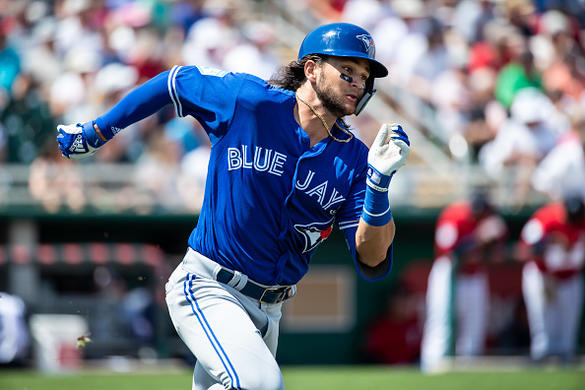 Bo Bichette :  In football, the song goes “I have been waiting all day for Sunday Night”.  Well, in fantasy baseball 2019, it is “I have been waiting all year for Bo Bichette ”!  Had Bichette not been hit by a pitch and broken a hand, he likely would have beaten fellow HOF son Cavan Biggio to the bigs.  Well, what can we expect now? For one thing, Bo knows power and Bo knows Speed. On the year at AAA (bookending the broken had), Bo has 8 dingers and 15 swipes in just 242 plate appearances.  Digging deeper, I see a K rate under 20% and an OBP of close to .340. Team Colton and the Wolfman has a ton of shares and will be trying to buy more this week. I suggest you do too!

Cameron Maybin :  Remember when Cameron Maybin was a can’t miss 20-year-old prospect who took Roger Clemens deep?  Remember when that can’t miss prospect was cut by the offense-challenged Giants this year as a 32-year-old veteran just trying to hang on?  Well, forget all that.  Now, Maybin is lightning in a bottle that has a clear path to playing time in New York with Giancarlo Stanton , Brett Gardner , Miguel Andújar , and Greg Bird on the shelf and Clint Frazier in the minors.  Sometimes you just have to catch the wave in fantasy sports and Maybin is that wave. After a long IL stint, Maybin returned to get on base five times in eight plate appearances (with three runs to boot).  On the year, Maybin is hitting a cool .323 with .900+ OPS and a good mix of speed and power. What I especially like is that he has a nice spray chart: 25% pull; 25% oppo; 50% up the middle. That is a professional approach.  The Yankees will score a lot in the dog days of August so Maybin makes a great buy-low candidate. 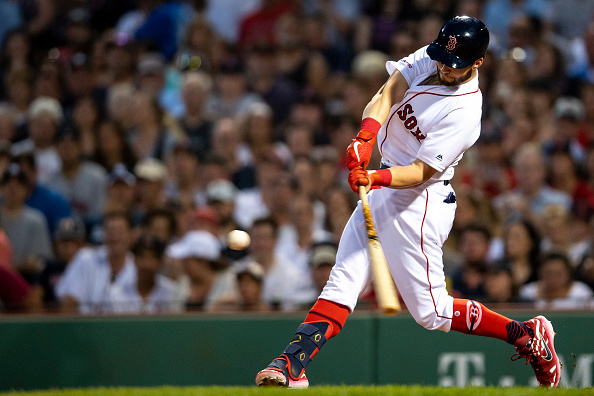 Andrew Benintendi :  Andrew Benintendi went 3-4 Sunday with a dinger, run and four RBI.  In the four-game series, Benintendi went 10-18 with two dingers, eight runs and six RBI.  That is production! On the year, Benintendi has not lived up to his hype in fantasy circles (.280 with 10 dingers).  However, he is hitting the ball harder than last year and hitting fewer ground balls while maintaining a strong contact rate.  This may not be a buy-low commodity but it is certainly a buy below actual value player. Proceed accordingly.

Jonathan Villar :  Jonathan Villar when 3-4 with a run, two RBI and a swipe Sunday.  I do not know why Villar does not get more love in fantasy circles.  His year-long numbers look like this: .262; 13 HR; 22 SB. Project that out and you have a guy who is eligible at both SS and 2B who will end the year at or close to a 20-30 season.  Oh, and if you like the advanced stats – Villar is chasing less, making better contact and hitting more line drives than a year ago. I am buying.

Reynaldo López : Last week we wrote: “Reynaldo López was dealing Friday tossing seven innings of two-run ball while walking just one and mowing down eight.  On the year, the surface stats do not look pretty: 5.76 ERA and 1.50 WHIP. Actually, that is brutal. However, in his two post-ASG starts, Lopez has pitched 13 innings, given up just 2 earned runs and has struck out 15 hitters.  Honestly, I am not sure if this is a talented pitcher finally putting it all together or just two darn good starts. However, I do know two things: One, he has the Marlins next so I am in for that start. Two, 25-year-old pitchers who throw 95, have had success in the past and already have a ton of MLB experience are better bets to take a leap than the kid who just arrived from AA.  If you need to make a move in the standings, speculate.” Well, eight IP, four hits, two ER, one BB, and 10 K say we got this one right. Yes, I know it was the Marlins but hey, the Mets are up next so I am staying on this train! [Oh and if you want a reason for his recent success, try this: he is throwing his slider more and it is working!]

Finally, the moment you have been waiting for (sort of) -- Schultz says: “I am taking a well-deserved rest before the trading frenzy this week.  Tune in the same time, same channel next week!”

Response:  Even those who dwell at the bottom of the page deserve time off!