Kevin Gausman Takes His Rightful Place in the Os' Rotation 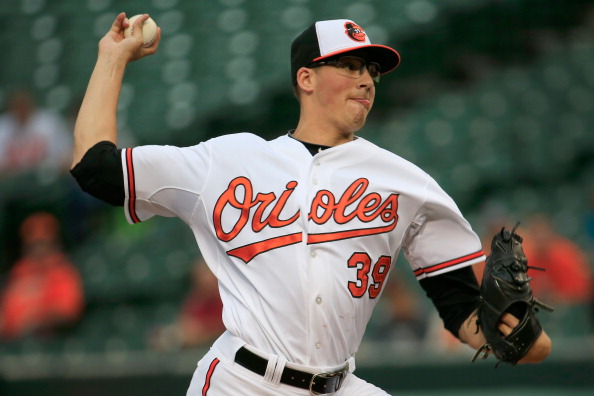 Kevin Gausman finally joining the starting rotation highlights this Week’s Week That Was.

Kevin Gausman:   Kevin Gausman seems to be staying in the rotation!  Happy Day!  I have been completely perplexed by the Orioles treatment of the fireballer.  In his last start, Gausman tossed 6.1 scoreless with seven strikeouts against the Rangers.  That gives him 23.3 innings with 21 K and a tidy 3.09 ERA and 1.16 WHIP.  When you add in the fact that Gausman is averaging almost 96 MPH on his fastball, has jacked his swinging strike rate to almost 11%, is giving up precious few line drives and is inducing more grounders, you have all the ingredients for success.  I am going to go so far as to say that Kevin Gausman will be on a lot of pennant winning fantasy baseball teams.

Ervin Santana:  Ervin Santana returned from his 80 game suspension with a bang, tossing 8 innings of two run ball while giving up just 3 hits and striking out 8.  Last year, Big Erv had a 3.95 ERA with 179K in 186 innings.  His move back to the AL should not hurt him as Minnesota is a good place to pitch (indeed the 2014 3.47 xFIP speaks to improvement in his new home).  All that said, the thing that makes me most optimistic about Erv is that he posted a career high 11.8% swinging strike rate in 2014.  As to who will lose their job, at this point it looks like he will displace Trevor May though I prefer seeing Mike Pelfrey head to the pen.  In any case, keep May in your keeper leagues and get Big Erv if he is still available!

Carlos Gomez:   Carlos Gomez had a huge night Friday going 3-5 with 5 RBI, a dinger and two runs scored.  CargoII has hit safely in eight of his last 11 games as of Friday so things are clearly looking up.  Thus far on the year, Gomez has hardly been stellar with his .271 average, 6 HR and 7 SB.  However, he has had a bunch of nagging injuries.  If he is indeed as healthy as he looks now, he should deliver a second half in line with his 61 HR and 74 SB of 2013-14.  If you own Gomez, hold.  If you do not own him, call the Gomez owner in your league, talk up the weak first half and try and get yourself a major bargain.  Now!

Neftali Feliz:   In what I can only describe as a strange move, the Rangers designated Neftali Feliz for assignment.  He will not stay unemployed long.  Yes the 4.58 ERA and 1.68 WHIP were unsightly but it was only 19.7 innings.  When you consider that Feliz has jumped his velo up to 93.7, was unlucky as his inflated .358 BABIP will attest and was getting more groundballs (albeit not enough), it is just hard to understand why the Rangers cut bait.  Will Feliz be closing for another team this year?  Probably not.  However, if he ends up some place like Toronto, you never know.

Miguel Sano:   Miguel Sano went 2-4 with a run and a RBI Friday night.  If you are in a keeper league, he is probably already gone.  If you are a redraft league, you need to keep the powder dry.  Why?  Think Joey Gallo.  Gallo came up to the majors with a bang.  However, reality set in and the 60% AA contact rate hitter showed the weakness in his game that still requires work.  Indeed he posted a meager 51% contact rate in the show before demotion.  As to Sano, his .274 in AA in 2015 and his .236 in AA in 2013 (he missed 14) tell me a very low average is on the way this year.  Will he hit a few bombs?  Yes.  Will he kill your average?  Yes.  Act accordingly.

Jedd Gyorko:  Jedd Gyorko went 2-4 with a run and two RBI Friday.  Gyorko is back in the show after a horrendous start.  I believed at the beginning of the year and still do believe.  I cannot explain the terrible start but I do know that since his recall, Gyorko is 7 for 19 with a dinger.  Given that he was really good in the second half last year, would it really surprise you if a really good second half happened again.  I am buying and recommend that you do the same.

Gio Gonzalez:  Gio Gonzalez pitched well again Friday, going 7 innings of 1 run ball while striking out 6.  Expect him to have a better second half than his below average first half where he has posted a 4.16 ERA and a 6-4 record.  Why?  Good question.  First, the velo has remained solid at 92 mph.  Second, the elevated BABIP will likely normalize.  Third, he has tossed 14 innings of one run ball in his last two starts.  Finally, Gio has elevated his GB% to an elite 56.5%.  He keeps that up and all will be rosy in DC.  Buy low while you still can.

And now the moment you well, may or may not be waiting for, the Baron of Bottom of the Page pontificates a/k/a Schultz says: “As the name of the column suggests, we here at The Week That Was devote time to looking back at what has transpired in the past in an attempt to provide some context of what is likely to happen in the future. Not so exciting when you actually think about it. In the spirit of celebrating freedom, Schultz will try this week to free you from certain misconceptions you might have and explain to certain teams "Why You're In Last Place."

When your draft snaked back at the end of the second round and you decided to get your ace as Kershaw, Kluber and King Felix were already off the board, you looked at the Nationals roster and pondered Strasburg or Scherzer? Somewhere in the back of your mind you recalled someone saying that it’s a bad idea to take a player in their first year with a new team and chose Strasburg. Your "ace" has given you a 5.19 ERA, 1.49 WHIP and a paltry (for him) 63 strikeouts. While you are in last wondering "wha' happen," the team that took Scherzer with the next pick is enjoying a 1.82 ERA, .78 WHIP and 139 strikeouts and likely looking down at you in the standings.

Did you believe the pre-season hype about the Red Sox? If the answer is yes, you are in last place. If you believed the hype about the Red Sox finding success with a pitching staff made up of #3 starters, you are laughably in last place. While Hanley Ramirez' 17 HRS (with shortstop eligibility) isn't hurting anyone, David Ortiz, Mike Napoli and Pablo Sandoval are likely killing teams around the country. The youth movement has a standard bearer in Mookie Betts, but Rusney Castillo and Jackie Bradley Jr. have made Alejandro De Aza and Shane Victorino useful and necessary. Lots to look forward to in the future but in 2015, this is why you're in last place.

When you decided to fill your second base slot with the best one in the game, you forgot everything Schultz has said about The Jason Kipnis being the once and future King of 2B and went for Robinson Cano. With Cano, you are in the basement as your stud-2B has hit .251 with 5 HR and 27 RBIs despite hitting in front of the unstoppable Nelson Cruz. Had you listened to Schultz and taken The Kipnis (likely in a later round since he's been hampered by injuries the last two years), you would be sitting pretty with his .343 6 HRs, 35 RBIs and 10 steals. You may say "hmm, those power numbers seem the same" but look where Cano was taken and look where Sir Kipnis was taken and you will know why you're in last place.

Then again, Kansas City fans seem to want Omar Infante to start the All-Star game and they're in first. Go figure.”

Response:  Hmmm, time to disagree with a few things The Baron has to say.  First, if you spent a second round pick on the injury prone Strasburg, shame on you – not for passing on Scherzer but for investing in the risky Strasburg.  Second, let us not judge Cano until the full year is in the books.  I see a big second half on the way.  As to the Sox, well, I never believed in Masterson but still believe that Porcello will return value (hint – that will be a very big subject Tuesday night at 10pm ET on Colton and the Wolfman).