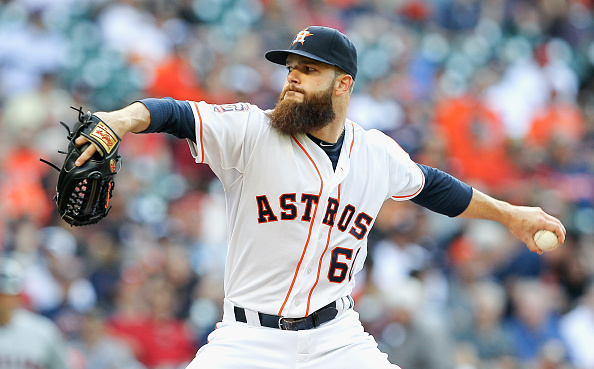 Week 2 is almost in the books.  The advice from last week – do not panic but look for opportunities to take advantage of league-mates who do -- still applies.  To help you carry out that advice, let’s take a look at some of the interesting stories and opportunities presented by week 2 MLB action in the Week That Was.

Dallas Keuchel:  Dallas Keuchel won on Saturday holding the Angels scoreless over six innings while giving up just two hits and striking out seven.  Loyal readers know I am a Dallas fan – of both the Cowboys and Mr. Keuchel.  Dallas the pitcher has a sweet ERA under 1.00 and a WHIP of exactly 1.00.  If you are going to tell me that he cannot maintain that 75% GB rate, you will probably be right.  However, you should not ignore the fact that in 2014 he lead all starters with a 63 % rate.  Yes, I know he does not throw that hard.  However, he gets a lot of swinging strikes.  Also, when you combine his K rate with his GB rate, you see that the combined rate was over 80% in 2014 and is over 90% in 2015.  If only 10-20 percent of the hitters are hitting flyballs or line drives (and remember many flyballs are cans of corn), you are sure to be successful.  Houston has struck oil with Dallas.

Leonys Martin:   Leonys Martin went 2-4 with a swipe on Saturday.  Thus far in the young season, Martin is hitting a paltry .184 with no HR and two SB.  Do not panic!  At 27 in his 3rd full year in the show, Martin is the classic high floor, high ceiling guy.  At worst, you will get 30+ SB with a solid average.  However, if he does take that proverbial next step (and he has the talent to do so), then you have a major bargain.  As to the slow start, his contact rate has remained steady and clearly that .231 BABIP will rise dramatically (probably by 100 points), so have no fear.  Of course, if there is an impatient owner in your league, you know what to do – fleece the fool!

Wilmer Flores: Wilmer Flores went 2-3 with a HR and two RBI Saturday.  As Howard Bender noted right here on the Fantasy Alarm, Flores has hit safely in five of his last six games and homered in two of his last three.  Yes, he is hitting only .222 however, his trademark contact rate (88% in 2014) is way below normal and should return.  Moreover, Flores has been unlucky so far with a mere .240 BABIP.  I know Flores is a weak defender and may not be able to hold down SS all year.  However, with Danny Murphy apparently on the blocks and David Wright missing big chunks of time every year, Flores will find his at-bats even if he does not stay at SS.  Buy!

Jean Segura:  Jean Segura had a productive Saturday going 2-4 with a run scored and a swipe.  So far in the young season, the Brewers shortstop is hitting .350 with a dinger and two steals.  Of course, he will not hit .350 but he could replicate the .290 of 2013 and could pair that with double digit dingers and 30+ SB.  At just 25 and already in his third full year in the show, Segura is a good bet to post his best season yet.  The contact rate continues to go up, the strikeout rate continues to decline and the line drive percentage continues to climb.  Again, all signs point upward.  Buy!

Kyle Lohse:   Going from signs pointing upward to signs pointing straight down, Kyle Lohse was bad again on Saturday giving up 6 runs and 9 baserunners in 6 innings.  Thus far in 2015, Lohse has an unsightly 10.34 ERA, an ugly 1.72 WHIP and has surrendered a dinger less than every four innings.  The Rules of Engagement encourage investment in pitchers that throw hard.  Why?  First because they are more likely to get whiffs, second because they can get away with not having their best stuff on a given night and third, because guys that need to be precise to be effective tend to fall off the cliff when they lose just a little bit.  I fear the latter is the case for Lohse.  With the velocity continuing to decline, it is hard to see him keeping the ball in the yard in Milwaukee this year.  Sell as soon as he has a good start or two.

Matt Carpenter:  Matt Carpenter went 2-5 with 2 RBI to stay just red hot.  Many criticized the Cardinals 3B as a guy who needs to get 650 AB to be roto-worthy.  Well in the dumpster fire that is NL 3B, that is certainly not so.  Indeed, in 2015, Carp is proving all his critics wrong.  So far, he is hitting .381 with 9 runs and 9 RBI.  I know he will not hit. 381.  However, with an increasing contact rate and a gaudy line drive rate, there is no reason to doubt Carp will return to the .300 level.  With his counting numbers, that will make him pretty special.  Buy!

Zack Cozart:  Zack Cozart continued his torrid start going 3-4 with a dinger on Saturday.  Cozart is now hitting .368 on the year.  Will that continue? No.  Will Cozart stink up the joint like he did in 2014 and hit a hideously ugly .221?  No.  Look for .250 with double digit HR.  If you get that, you will earn a profit for sure.  Want more reason for optimism?  His line drive rate is up and he has not hit an infield fly ball all year.  Given that he hit those automatic out popups over 13% of the time in 2014 that is a huge improvement.  There is value to be had here.

And now the moment you well, may or may not be waiting for, the Baron of Bottom of the Page pontificates a/k/a Schultz says: “Even though the 2015 season is only two weeks old, it's human nature to start to worry about your roto-team. It's astounding how quickly many owners go from "I've just put a championship team together" to "hmmm, am I going to have to dump" despite not having enough evidence on which to base a decision. Clayton Kershaw is unlikely to finish the season with his current 4.42 ERA and 1.53 WHIP, Jose Bautista will likely improve on his .150 batting average and Evan Gattis can't possibly strike out 450 times in a single season (or can he?). On the other hand, Adrian Gonzalez, Lorenzo Cain and Ubaldo Jimenez won't keep producing at their unsustainable rates. As tempting as it is to tinker with what doesn't seem to be working, it's way too early to be making bold, non-injury related decisions.

In that vein, unless Kris Bryant was eligible for your draft/auction, it's likely someone's free agent budget is about to be busted. Unless you are living in the Dagobah System, you've heard that the Cubs finally promoted their fledgling phenom of a third baseman to the majors. Those with working short-term memories remember the year that Mike Trout became the greatest free-agent savior in the history of roto-baseball or the following year when Jose Fernandez surprisingly became one of the best pitchers in the game at 20 years of age instead of treading water in the minors. If you are all-in on Bryant, you're surely swayed by his solid minor league career and gargantuan pre-season. Still, Bryant offered everyone a reminder why it's imprudent to overvalue the pre-season by whiffing (badly) in his first three official at-bats.  The collective wisdom that Bryant will be one of the best roto-3B by the end of the year has been predominantly fueled by hyperbole and has proceeded on its own momentum. Bryant will definitely be good - most likely, he'll have a productive and useful roto-year. However, isn't this what we all said last year when George Springer joined the Astros? Proceed circumspectly.”

Response:  Yes, it is way too early to panic! Listen to Schultz (wait, did I really type that?!?!?!)