The Week That Was Football: The Injuries From Week 7 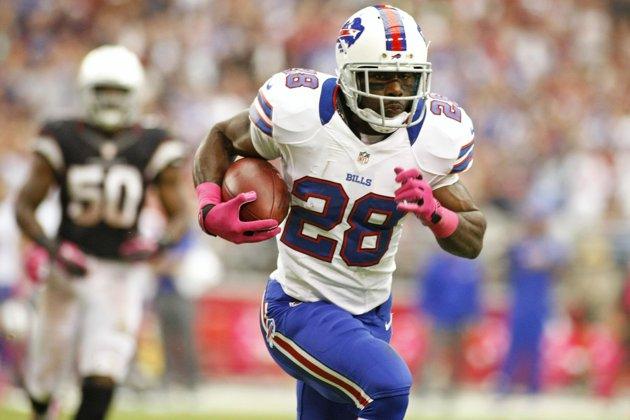 The Week That Was Football: The Injuries From Week 7

Fred Jackson:  Fred Jackson suffered a groin injury Sunday and according to reports, will miss at least one game if not more.  This is a big loss for the Bills as FJax has clearly been their best RB and a big loss to PPR fantasy players as FJax has added 33 catches to his rushing totals.  Yes, Kyle Orton has been a nice story and yes, the comeback Sunday was fun to watch.  However, that comeback was against the lowly Vikings.  Bottom line – no way the Bills can succeed this year without an effective running game.  Unfortunately, as you can see in the next entry, the FJax loss became far bigger for the Bills later in the game.

C.J. Spiller:  C.J. Spiller’s opportunity to run as the Bills RB1 did not long.  In a tough break literally and figuratively, Spiller broke his collarbone and is done for the season. Without either CJ or FJax, the Bills turned to Anthony Dixon.  The SF castoff carried the ball 13 times for 51 yards and caught three balls for 15 yards.  Dixon is a big back who has done very little in his 5 years in the league to make anyone think he will run like an RB1 in the weeks to come.  Given that the Bills play the stout Jets run defense next week and then have a bye, I would not be running out to spend my FAAB fortune on Dixon.  That said, Bryce Brown could be a worthy high risk high reward pick.  Brown, who was a healthy inactive in week 7, is a far more explosive back and the one I would stash if I was going shopping in the Buffalo RB aisle of my FAAB supermarket.

Trent Richardson:  Trent Richardson had a nice day, carrying the rock 14 times for 77 yards with a bonus four catches for 41 yards.  Why is he in this column focusing on injuries you ask?  Well, he did leave the game with a hamstring injury and did not return.  According to reports, this injury is not serious and he could have come back in had the game been close.  The bottom line here is that Trent represents a buying opportunity. First, folks may be worried about an injury that is not as serious as “did not return” makes it seem.  Second, the Ahmad Bradshaw hype is at its pinnacle.  Third, in his last 4 games, Richardson has 12 catches and two TD.  So, even while splitting with Bradshaw, he is putting up decent fantasy numbers.  Now if Bradshaw were to have to miss time . . . I mean when . . .   You get the point.

Andre Williams:  Playing for the injured Rashad Jennings, Andre Williams looked slow and plodding.  Williams ran the ball 18 times for 51 yards – an average of under 3 yards per carry.  He also failed to catch a ball or reach the end zone.  The bottom line here is that Williams is a change of pace bruiser and no threat to Jennings who is set to return after the Giants bye week in week 8.  If the Jennings owner in your league is desperate for a bye week replacement next week or still believes the preseason Williams is a threat to Jennings nonsense, there could be a very good buying opportunity.  It is worth exploring.

A.J. Green:   According to reports, A.J. Green is saying he will play next week after missing two weeks with a toe injury.  Well, the Bengals and Green owners better hope so as the Bengals offense looked awful and out of synch without the start wideout.  Watch this news carefully.  If Green looks good in practice during the week, Andy Dalton and Giovanni Bernard become much better plays against the Ravens next week.

Reggie Bush:   Reggie Bush should have had a big game in his grudge match against the Saints, his former team, Sunday.   It did not happen that way as he missed time during the game with another ankle injury. Joique Bell has outplayed Reggie and looks to be the number 1 back in Detroit.  Add in the fact that the Lions are a shell of themselves without Megatron and you can just move along.  3.5 yards per carry and one TD is just not getting it done.  The only saving grace is that the Lions visit the hapless Falcons D next week.

Shane Vereen:  With Stevan Ridley out for the year, Shane Vereen got the touches – 11 rushes and 8 targets in the passing game.  Vereen is now the guy with Ridley out right?  Wrong.  Vereen is worth owning in PPR leagues but he will not run enough to make your lineup as an RB2 in standard leagues.  As to who will end up being the bell cow back for the Pats, well no one knows.  If I had to pick one back to put on my bench as a lottery ticket, I would pick Bolden but that is purely a gut call on my part.