Week That Was: The Bruce is Loose 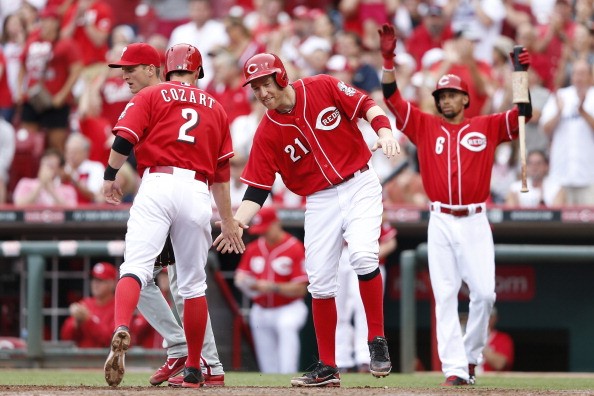 The Week That Was: “The Bruce is Loose”

Jay Bruce filling the stat sheet highlights this week’s Week That Was.

Jay Bruce:  In one of those games about which fantasy owners dream, Jay Bruce went 2-3 with a home run, two RBI, three runs, and a stolen base Friday night.  So far, other than the surprising 8 SB, Bruce has been a major disappointment.  The Reds’ OF is hitting just .218 with only 6 HR and 24 RBI.  Was Friday’s huge game his breakout?  Hard to say but I will say this: it IS time to buy low.  Bruce is just 27 and has three straight 30+ HR, 95+ RBI seasons under his belt.  He was slowed by a knee injury earlier this year but now he seems healthy, is poised to spend a summer hitting in Great American and is actually being more selective as evidenced by a 33% increase in his walk rate.  The power is on its way and the speed is a bonus.  Buy during this short window of opportunity.

Ian Desmond:  Ian Desmond went yard again Friday and finished the night 2-6.  On the year, Desmond is hitting with power (14 HR and 45 RBI).  That is the good news. The bad news is that he is hitting a lowly .237 with only 5 SB.  So, which Desmond will appear now that summer is officially upon us?  Will the power continue? Will the weak average and reduced speed continue?  Well, unless he cuts down on the K’s, the average will continue to plummet.  Desmond’s strikeout rate is up an alarming 30%!  On the power side, given that he has hit 45 dingers in the last two years, it is not hard to see the power continuing.  Bottom line – if you are playing Desmond every day for the power, know your average is likely to suffer.

Alex Wood:  As a person, you have to really feel badly for Gavin Floyd.  After making it all the way back from TJS, he breaks his elbow throwing a pitch.  It is just not fair.  The only silver lining for the Braves is that they do have Alex Wood ready to come up and take the open spot in the rotation.  Before getting sent down because of the glut of starters, Wood had posted a 3.43 ERA and struck out 63 in 60 innings.  All signs point to continued success but there are two warning signs.  First, Wood was wild in AAA, walking 4.4 per 9.  Second, he has never thrown more than 140 innings so there is a real chance he tires down the stretch.  Buy, but with some caution.

David Phelps:  David Phelps was solid again Thursday, giving up just two runs on six hits while striking out seven against the loaded Blue Jays offense.  After some ugly pitching earlier this month, Phelps has given up just two runs over his last 13.2 innings.  Honestly, Phelps is a bit of a puzzle.  Good:  when you watch him pitch, you see a bulldog who is not afraid to go after hitters.  Bad: you also see a pitcher throwing a lot of stuff that seems to be just too straight.  Bad: Phelps does not throw hard.  Good: he does have a 3.86 ERA despite a BABIP that is 20 points over his three year average.  So, what to do?  Split the baby.  Roster Phelps in AL-only leagues but avoid him in 12 team mixed leagues.

Jesse Hahn:   Jesse Hahn looked good again Thursday, giving up no earned runs while striking out seven in a win over the Mariners.  After posting a 2.11 ERA in AA, Hahn has continued his success in the bigs with a 2.16 ERA and 19K in 17 Inn.  His FIP and BABIP say a correction is coming but not a giant one.  Given that he pitches in Petco, Hahn makes a very good addition for NL-only owners and for those in mixed leagues who can start him at home and sit him on the road.

Danny Duffy:  Danny Duffy continues to show flashes of why he was such a highly touted prospect.  Thursday, he faced off against the Tigers and gave up just two runs on three hits over seven innings.  On the year, Duffy has a very strong 2.80 ERA with a 1.05 WHIP but his strikeout rate of less than 7 per 9 leaves something to be desired.  I think Duffy will continue to be good but the ratios are headed north.  Given the .224 BABIP and the low K, it may be time to sell high in re-draft leagues if someone will pay full value right now.

Jonathan Lucroy:  Last week we wrote “Jonathan Lucroy continued his scorching ways Friday, going 2-5 with an RBI.  Over his last 6 games, the Brewer backstop is 12-27 with a dinger and four RBI.  Frankly, this is nothing new as Lucroy has raked all year.  As of now, he stands at a gaudy .337 average on the year.  Two questions:  Will it continue and was it foreseeable?  Answers are yes and yes.  Lucroy is hitting against both lefties and righties and has shown growth as a hitter as the walk rate is up, contact rate is up and K rate is down.  Thus, there is no reason for him to take a step back any time soon.  As to whether you should have seen this coming, focus on the facts that Lucroy hit .280 last year despite a depressed BABIP, increased his walk rate, increased his contact rate and reduced his K rate for three straight years as of the end of 2103.  Bottom line – Lucroy is the most underrated catcher in fantasy and maybe in all of baseball.”  Well, I hope you tried to go get the Brewer catcher.  In the last week, all he has done is hit .348 with 3 HR, 7 RBI and 7 Runs.  Convinced yet?

And last and but not least, this from the Baron of the Bottom of the Page.  Schultz says:  “Living in New York City, west coast baseball tends to become something that happens predominantly in the middle of the night. Waking up to find out that Corey Dickerson keeps raking, Yasmani Grandal and Chase Headley continue disappointing and Robinson Cano still has trouble hitting the ball over the outfield fence are just part of the normal daily routine. When Clayton Kershaw pitches a no-hitter, it's like awaking to find the Tooth Fairy has left a shiny coin under your pillow. Unless you're a night owl with the baseball package, Paul Goldschmidt's MVP campaigns and Josh Reddick's beard are simply the things legends are made of (or the substance of quickie highlight reels).

For most on the east coast, Sean Doolittle pitches nearly exclusively in the wee hours of the morning, his normal working hours beginning sometime around 1:30 a.m. EST. This results in nearly half of the continental U.S. missing the most dominant pitcher in baseball right now. Emerging from the wreckage of the A’s bullpen imploding on itself, Doolittle has not only claimed the closer role, he's leapt into the upper echelon of relievers. (Keep in mind though, the leap into that strata is nowhere near as hard as remaining there). In the 18 innings since settling into the 9th inning role, he's struck out 29, walked ONE, given up only THREE hits and hasn't given up a run. If anyone has slept on Doolittle this year, wake up quickly.

The other story that has emerged on the overnight shift is Matt Kemp starting to remember he's Matt F'n Kemp, the uncrowned NL MVP of 2011. Injuries have plagued Kemp over the past two seasons and it's always tempting fate to proclaim him healthy. Nonetheless, since taking over left field in LA, Kemp has hit for power and average and has resumed driving in runs. It would be fanciful dreaming to think he's become a stolen base threat again but 4/5 of Matt Kemp is better than most. There might be a buying opportunity if Kemp's roto-owner has grown frustrated and is looking for change.

A rhetorical question to close out this little piece of The Week That Was; If those that run Major League Baseball were told that they could eliminate the statistically improbable rash of injuries that have beset the league this year by quietly permitting the use of HGH, what do you think they would do? ”

Response:  Wow, interesting analysis from an east coaster whose little league coach in Connecticut was none other than Meat Loaf (true story). As to the HGH issue, well, I am not going there.