Week That Was: Kung Fu Panda for You 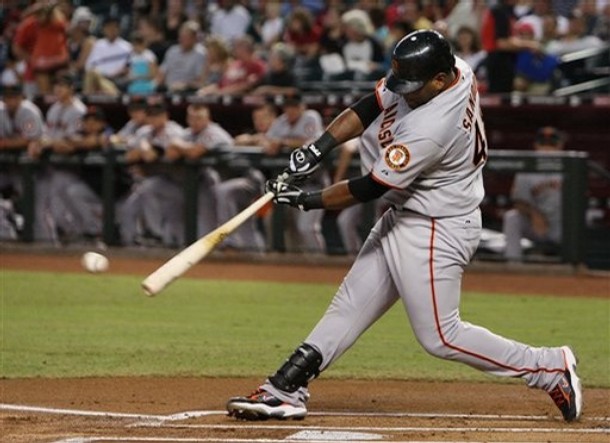 The Week That Was: “Kung Fu Panda for You”

The case for buying stock in the Kung Fu Panda highlights this week’s Week That Was:

Pablo Sandoval:  Pablo Sandoval put up some numbers Friday with a three-run home run and then went yard again on Saturday.  There is really no question that the Kung Fu Panda was a major disappointment early on.  However, since May 4th, the Panda is raking: .300+ (21-for-70), 4 HR and 12 RBI.  So, will the real Kung Fu Panda please stand up?  Stated another way, which Panda will play for the Giants and your fantasy team this year?  My answer: the May version.  The Panda is a classic victim of his own success – a guy who made the majors really early and had some success at an age where many are still in the minors, but then failed to live up to the generated hype.  The Panda is only 27 yet he is in his 8th major league season.  During his career, he has already logged 2 seasons with 20+ HR and three with a batting average above .300.  At just 27 and playing for a contract, there is every reason to believe that the Panda will thrive the rest of the way.  Buy before the window of opportunity closes!

Homer Bailey:  Homer Bailey was better on Friday but still not great as he allowed three runs on eight hits and two walks while striking out four over six innings. Bailey’s overall surface stats are ugly thus far and certainly not what you paid for:  4-3 with a 5.34 ERA and 1.59 WHIP.  However, when you dig deeper and look and the advanced metrics, you see a serious buy low opportunity.  His BABIP is 50+ points over where it was the last three years meaning he has been unlucky.  Moreover, his average fastball velocity is still about 94 making it highly unlikely an injury is the cause of his poor start.  When you add in the fact that Bailey made the majors at just 21, is only 28 and has increased his Ks and reduced his ERA and WHIP in each of the last 4 years, you have all the reasons you need to buy low before it is too late.  Do it!

Nick Hundley:  The Orioles, in obvious concern for the health of Matt Wieters, went out and got Nick “don’t call me Todd” Hundley from the Padres.  For those in AL-only leagues and those in 15 team mixed leagues, get Hundley on your radar screen.  He hit 13 HR in approx. 400 AB last year and posted similar HR rates from 2009-11.  All of that power came while calling cavernous Petco park home.  Do you think a few more of his flyballs will leave the park in Baltimore and when playing division games in Yankee Stadium, Fenway and Rogers Center instead of ATT Park and Chavez Ravine?  Um, yeah.  No need to break the bank but if you need a little pop out of the C2 position, you could do a lot worse than Hundley.

David Buchanan:  David Buchanan made a spot start for the Phillies on Saturday subbing in for the injured Cliff Lee and held his own:  5 IP, 5 hits, 2 ER while striking out 2 on his way to a win.  If you streamed Buchanan and got the win, good for you.  Should you continue with the Phillies latest SP?  No.  Buchanan had a very pedestrian 3.98 ERA in AAA with an ugly 31:17 K:BB over 40.2 innings.  Add in the fact that Buchanan had a 1.59 WHIP at AAA this year and a 1.42 WHIP at AA last year, and you really have little reason for optimism.  Pass.

Anthony Rizzo:  Anthony Rizzo went yard for the 8th time this year and added 2 RBI to help the Cubs best the Padres on Thursday.  On the surface, the highly touted 1B is having an ok season with his 8 HR and .263 average.  However, when you dig deeper, there are a lot of reasons to be confident in what Rizzo will do this year and beyond.  Rizzo has walked more than he has struck out, has registered a sweet .399 OBP thus far and has raised his contact rate in the process.  If there is someone in your league frustrated by Rizzo not hitting bombs like his south side counterpart, pounce on an opportunity.  Rizzo is a guy who can carry you this year and one around whom keeper leaguers can build for the future.

Jake Arrieta:  Sticking with the Cubbies, Jake Arrieta pitched very well Thursday, allowing just one run on four hits and one walk while striking out seven.   Arrieta, who missed the early part of the season has a sweet looking 2.33 ERA while averaging more than a K per inning.  I like Arrieta the rest of the way.  Not only is he striking guys out, he is throwing hard, reducing walks (tough more reduction is needed) and doing that while being a bit unlucky (as shown by his .367 BABIP).  Yes, wins may be hard to come by but NL-only and 15 team mixed leaguers could do a lot worse than grabbing Arrieta while you still can.

B.J. Upton:   In the last week, B.J. Upton has shown signs of life:  .316, HR, SB and 5 BB against just 1 K.  Will B.J. ever be mistaken for brother Justin Upton?  No.  Can he be had for pennies on the dollar now?  Yes.  Should you invest in the low risk, high reward Brave now before it is too late?  Yes.  After all, this is a talented player who had double digit homers and 30+ SB four years in a row and is just 29 years of age.  Buy while the price (and his owner) is depressed.

And last and but not least, this from the Baron of the Bottom of the Page.  Schultz says:  “When you've been playing rotisserie baseball for a couple decades, it’s inevitable that you'll come up with several theories about the best ways to predict the unpredictable. Unfortunately, naming those theories can sometimes make them seem archaic, even though the logic still remains sound. Thus, the convoluted introduction to one of Schultz' favorites: the Tony Gwynn theory. According to the TGT (little linguistic trick, abbreviating it disguises its age), the best time to acquire Tony Gwynn or make sure that he's in your active lineup is when he's hitting .220. One of the league's most dependable hitters - he retired with a .338 lifetime batting average - Gwynn was certain to get that average up and it would be quite the roto-ride while he did it. The TGT is always good to keep in mind in late-May when looking for players who are likely to be roto-studs in the near future.

Two weeks ago, Pablo Sandoval was hitting .171 and frustrating every one of his roto-owners that figured a slimmer version of the Kung Fu Panda going into a contract year would put up monster numbers. Well, one week ago, he had his average above the Mendoza line and, as of this morning, has it up to .225. Despite a frustrating rash of injuries throughout his career, the Panda is just a smidge shy of being a lifetime .300 hitter. You definitely want to be on board as his stats climb back towards the norm.

Although Carlos Santana hasn't responded to Colton's prediction of a dramatic upswing three weeks back, he is ridiculously due for a course correction. Although Santana is only a lifetime .250 hitter, the benefits to be reaped from having him in the catcher slot while he gets his average there from his present .156 should not need a lengthy explanation. If you are puzzled as to why this may be good, it's quite likely you are the team everyone keeps around as a potential "farm system" and last place anchor. In that case, just trust us here at The Week That Was and blindly follow our instructions. That'll teach them for underestimating you.”

Response:  For those who do not know it, I write my portion of the TWTW before looking at what Schultz says for the week.  It warms my heart that we both are warm and fuzzy about the Kung Fu Panda!  As to Carlos Santana, I think there has been a pretty good upswing.  Over the last 14 days, Santana has 2 HR, 6 runs, 7 RBI and while his average is just .208 over that period, it is a huge improvement over .150 and belies the really nice .354 OBP he has posted.  All that said, the fact that his average still has him riding the interstate provides a strong buying opportunity for you.  Use it!

Final thought:  I am sure I speak for Schultz too in wishing everyone a safe and happy Memorial Day weekend.  Enjoy your family, friends, barbecues and events.  Just please remember to give thanks to those who paid the ultimate price to secure the freedom we all enjoy.  This holiday is meant to honor them and all they have done to allow the rest of us to be free and celebrate this holiday weekend.