Week That Was: All in on Alcides 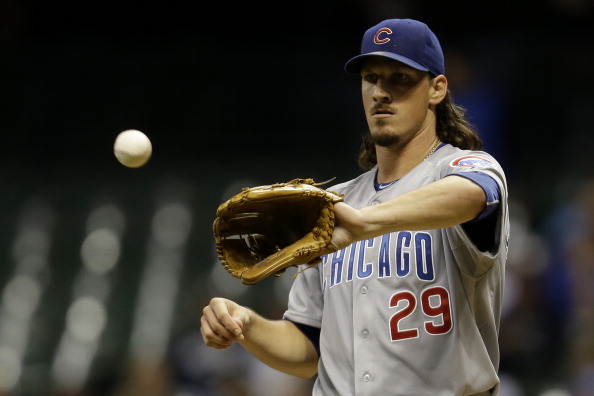 The Week That Was: “All in on Alcides”

Some buy lows and sell highs highlight this week’s Week That Was:

Alcides Escobar:  Alcides Escobar got off to a very slow start but in the week that was (the last 7 days), the Royals SS hit .417 with a .959 OPS.  Stated simply, Escobar presents a great buy low opportunity at a scarce position.  His slow start, together with a subpar 2013, masks substantial upside.  First, Escobar is 27 and already has 4 full seasons under his belt.  Second, Escobar already has posted a .293 season (2012) and has averaged 27 SB per year over the last three years.  Most importantly, when closely examined, his facially subpar 2013 should have been much better. He posted a strong line drive percentage and reduced his strikeout rate.  Bottom line – he was unlucky as shown by his .264 BABIP, a number way below that which a player of Escobar’s speed should post.  Again, buy now before it is too late.  [Note – in case you are wondering, I own him in LABR, Tout Wars and NFBC, so I have put my money where my mouth is].

Jason Vargas:  From buy low to sell high.  Jason Vargas tossed 7 shutout innings for the win on Friday.  Through four starts this season, Vargas has allowed only 4 earned runs in 29 innings.  Nice work but in my view, a start that is unlikely to continue.  Yes, it is early but the more advanced stats paint a stark picture.  Despite an ERA of 1.24, his FIP is 4.06.  Add in the fact that Vargas has been very, very lucky with a BABIP of .215 (career average of .288) and you have a neon sign screaming correction.  Sell high while and if you still can.

Jeff Samardzija:  Jeff Samardzija continues to draw pocket aces and get bad beat on the river.  Translation, he continues to suffer from hard luck as demonstrated by failing to register a win again Friday despite giving up just one earned run and striking out 7 over 7 innings against the Reds.  Thus far this year, Samardzija has a stellar 1.29 ERA and 22 strikeouts in 28 innings.  If the Samardzija owner in your league is frustrated by the lack of wins, feed fuel to the fire by pointing out his 2013 4.34 ERA and 1.35 WHIP.  However, under no circumstances mention his improved GB rate, bloated BABIP and 9+ K/9 from 2013.  Those numbers, consistently high velo and a contract push should all add up to a big year for the Cubs righty.

Juan Francisco:  Adam Lind landed on the 15-day disabled list with lower back issues. Lind’s bad fortune is good fortune for Juan Francisco.  The former Reds, Braves and Brewers cornerman has been raking at AAA, batting .349 with two home runs and 11 RBI over 43 at-bats.  When you add in the facts that Francisco blasted 18 HR in only 336 major league AB last year, will get his first taste of hitting in the friendly environs of the AL East, and is still only 26 years old, you have a sneaky buy low opportunity for AL only leagues.

Aaron Harang:  Back to sell high.  Credit where credit is due - Aaron Harang pitched great giving up NO hits to the Mets over 7 innings last night.  Amazingly, Harang’s ERA sits at a miniscule 0.73 ERA.  Sell while you still can.  Harang is walking 4.5/9 innings, has not posted a good WHIP since 2007 and has been super lucky so far as his .152 BABIP reflects.  It is a feel good story now but if you are banking on it lasting, you will not feel so good later.

Dallas Keuchel:   Last week, we touted Keuchel as a buy low AL-only back of the rotation starter.  In the week that was, Dallas made us looks smart by going out and tossing 6 innings of 2 run ball while striking out 5 and walking only 1.  Last week’s analysis applies with even greater force after his third quality start in a row:  “Can he be an under the radar solid back of the rotation starter in deep leagues?  I think so.  In 2013, Dallas upped his K/BB up to a very respectable 2.37 and posted an extremely strong 2.57 GB/FB ratio.  If he keeps those metrics up and reduces the inflated .346 BABIP of a season ago, a solid 2014 season will be had.”  Buy!

Franklin Morales:  Franklin Morales took advantage of the opportunity created by Brett Anderson’s injury, allowing only one run on four hits while striking out 5 in 6 innings Thursday.  I wholly admit this is a hunch but I think he will be productive in NL only leagues.  Take the hunch for what it is worth but sometimes one has to play hunches, especially in deep leagues.

And last and but not least, this from the Baron of the Bottom of the Page.  Schultz says:  “The bizarre Australian scheduling and freakish fluctuations in the weather north of the Mason-Dixon line has played havoc with certain teams. Clayton Kershaw's entire 2014 season has taken place before the rest of the league broke spring training, Hyun-Jin Ryu seems like he's already thrown a dozen games and Drew Smyly, the Tigers fifth starter didn't actually start a game until this past Friday. As it pertains to the Tigers young hurler, ignore last night's start as it will likely be an anomaly. Due to off days, rain days and snow days, Smyly has had starts postponed and games skipped while being unceremoniously shuttled back and forth to the bullpen where he's spent most of April bailing Anibal Sanchez out of his poor cold weather outings. In his 18 starts in 2012 - his rookie year - Smyly showed decent command of his pitches while striking out nearly a batter an inning. When moved to the bullpen last year, he cut down on the walks and maintained his K-proficiency. (I just made that term up but that sounds very much like a roto-pundit term). The Tigers didn't move Doug Fister to Washington solely so they could lock up Max Scherzer, they wanted to move Smyly into the rotation. If the Smyly owner in your league isn't thinking of the long game, take advantage.

While we're discussing April starts to ignore, it might not be a bad idea to discount what's going on in Atlanta with Aaron Harang and his impression of the most dominant pitcher in baseball. No one ever gets excited over a starter with a career 4.23 ERA and 1.35 WHIP unless they are offering to pitch for their softball team on Sunday yet, the now-journeyman Harang has always given the appearance of being a better pitcher than his numbers indicate. Harang was pretty miserable with the Mariners and Mets last year and despite a decent spring, couldn't beat out Carlos Carrasco as the Indians' fifth starter. Enjoy the production you're getting now but be prepared for a quick drive off a steep cliff.

When Justin Morneau anchored the perennially playoff bound Minnesota Twins (that's probably as funny a phrase to read as it is to write), he was very used to playing cold weather games in April. Enjoying the thin air of Colorado, the former AL-MVP is showing signs of a roto-resurrection by hitting .333 and socking a couple homers. If the recent rhetoric about Albert Pujols' potentially diminishing skills seems familiar, it is because it is: switch Pujols for Morneau and plantar fasciitis for concussion and you've uncovered the secret of some lazy sportswriters. It would be foolhardy to think that Morneau is about to regain his Triple Crown form but there may be some hidden value lurking here.”

Response:  Gotta give Schultzie credit turning an Aaron Harang story into something about his beloved Indians.  And yes, I write that this week having not mentioned my beloved Yankees in the column this week until just now.