Fantasy Baseball Week That Was & Will Be: Manaoh Stands Out 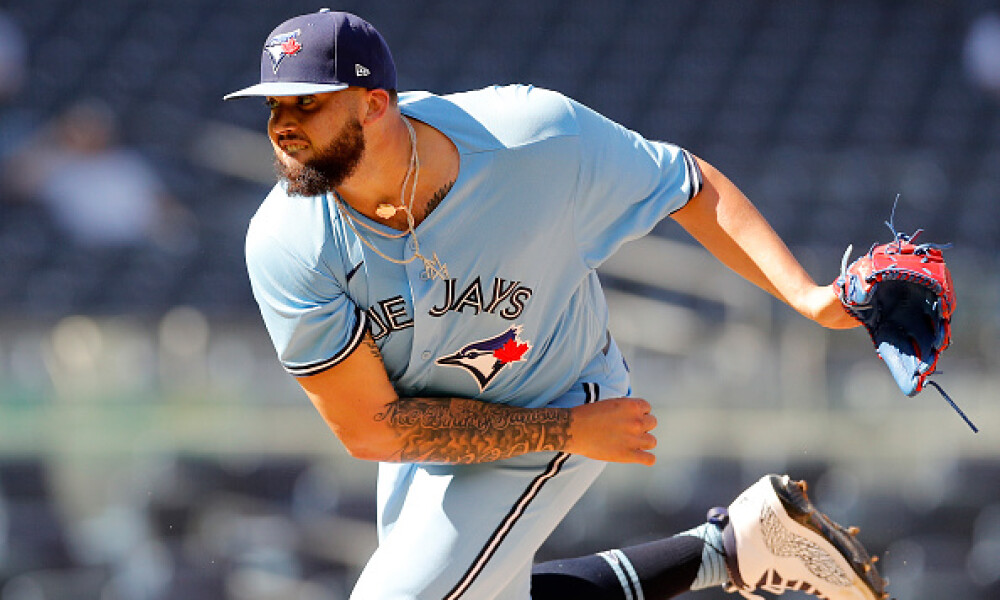 Alek Manoah bursting on to the scene highlights the Week That Was and Will Be.

Alek Manoah:  Alek Manoah made quite an impression this week mowing down the Yankees on the way to his first MLB win.  Manoah tossed six innings of shutout ball, striking out seven while giving up just two hits and two walks.  With a mid 90s heater, nasty slider and confidence in the change, Manoah will be giving hitters fits for some time.  The only question is how many innings the Jays will let him throw.  My two cents is that it will be enough to make a difference on your fantasy team.

For the Week That Will Be:How can you not be jazzed to watch the big fella pitch against the Marlins?All in.

Chris Bassitt :  Chris Bassitt was nasty this week going the distance in a pitcher’s duel against Patrick Sandoval. While the latter pitched five shutout innings, Bassitt did more including striking out 9 and allowing just two hits and one walk.  Yes, I know the Angels are without Mike Trout but still!  On the year, Bassitt boasts a gaudy 3.21 ERA/1.00 WHIP set of ratios.  With increases in his ground ball, first pitch strike and swinging strike rates and a FIP that says the ERA should even be lower, there is little reason to doubt the results.

For the Week That Will Be:With the next three starts against Seattle, Arizona and KC, Bassitt is plug and play.

Chris Flexen :  Chris Flexen pitched very well this week tossing 7 shoutout innings against the Rangers, giving up just four baserunners and striking out 6.  The low swinging strike rate worries me as does his ability to get wins on the Mariners.  However, as a streamer, you could employ Flexen profitably.

For the Week That Will Be:I do like the next two dates on the calendar – Oakland and Detroit.Stream away.

J.P. Feyereisen:  Last week in the “what do to do if your FAAB bids do not go as planned” section we gave a mention to J.P.  Well, the price has certainly gone up.  Saturday, the Rays’ hurler earned his second save since the trade, tossing a clean inning while striking out one.  Since arriving in Tampa, JP has pitched four times, earning a win and two saves.  The question is can this continue?  Answer: heck yeah.  The 42% ground ball rate and the very impressive 17% swinging strike rate both support this notion.  Moreover, each of his three offerings have a swinging strike rate over 11% with the change up being just filthy at 30+%.  Oh, and that change also induces grounders at around 70%.  I am a believer.

For the Week That Will Be: At this point, J.P. is plug and play.Even in shallow 12 team leagues a guy with at least a share of his team’s saves and vulture wins needs to be in your lineup.In 15 teamers and AL-only, it is a no-brainer.

Brad Miller :  Brad Miller went 2-4 with a RBI Sunday to push his average over .300 (.304 to be exact).  Yes, that Brad Miller , the one who came out of nowhere to hit 30 dingers for Tampa in 2016 and then proceeded to hit 29 over the next three seasons combined!  Well, now at age 31, Miller is back and is playing almost every day -- and he is producing.  Can this last?  Well, the .400+ BABIP will not hold but he is hitting the ball harder than ever and chasing outside the zone less.  As they say, the jury is out for the long haul but. . . .

For the Week That Will Be:Keep sending him up. I very much like the three games he gets to play at the start of the week in the bandbox that is called Great American Ballpark.

If you did not get the pitchers you want, consider these middle relievers on teams with weak or unsettled closing situations or potential openings in the rotation:Keegan Akin who has a 10+% swinging strike rate on three pitches proving an MLB arsenal; Kyle Zimmer with Josh Staumont on the shelf or Demarcus Evans and his uber-spin fastball?

If you are in the mood to gamble, how about Jason Martin – the Rangers gave Adolis García a shot and see how that worked out?

The moment you have been waiting for (just play along) -- Schultz says: “In the leadup to every season, roto-pundits throughout the world (well, probably only in America) pontificate over which thirty relievers should be acquired with the expectation that they will be the “closer.” For some teams, it’s unnecessary to break out the crystal ball to divine the back end of the bullpen; it didn’t take the proverbial third eye to discern that Josh Hader and Aroldis Chapman would be fine choices to anchor a bullpen in any realm – real world or fantasy. For other teams though, a thorough statistical analysis produces no better results than simply tipping over the tea cup and trying to read the leaves.

The roto-gods (not to be confused with Colton The Overlord) have conferred upon Schultz the prophecy that leads to the Holy Grail of the identifying that hurler that will unexpectedly sit amongst the league leaders in saves. The words that have been passed down to Schultz from high on the mount (or really, mound) unwaveringly counsel that “he who shall saveth a bounty of games, shall be wholly unknown and completely unspoken of until he reveals himself in due time.” Disconcertingly, the prophecy can only be deciphered in hindsight.

The two closers that presently lead MLB in saves were on absolutely no one’s radar at the end of spring training. Everyone predicted great things for the 2021 San Diego Padres. However, the collective punditry believed that Drew Pomeranz ’ lively arm or Emilio Pagán ’s veteran savviness would literally save the day in Southern California, completely forgetting or dismissively disregarding perennial workhorse Mark Melancon . Whether it’s been Houston, Pittsburgh, Boston or Atlanta, games always seem to end with the ball in Melancon’s hand. With a .74 ERA and .95 WHIP to go with his league-leading 17 saves, he seems to be one of the candidates for free agent pickup of the year.

Similarly unheralded at the start of the season, St. Louis’ Alex Reyes wasn’t even in the discussion for saves with all “smart” eyes (not to be confused with the SMART system) focused on the returning Jordan Hicks . In the same manner that Mariano Rivera made everyone forget his inaugural stint as an extremely below-average starter, Reyes’ 2021 is a fine opening salvo towards making everyone forget his pre-season reputation as “injury-plagued bust.” While his 1.36 WHIP provides ample cause to question whether his .64 ERA is remotely sustainable, it does seem safe to say that the Cards are going to roll with Reyes and abandon the thought of returning him to the rotation.

Remember, he who shall leadeth the league in saves shall be the hurler that no one thinks will do so.”

Response:  Funny and insightful.  I really wish there was something in there to razz Schultz about but alas, no.  Nice work!

Final Thoughts:  I hope everyone enjoys this holiday weekend but please remember to also give thanks to those that made the ultimate sacrifice to preserve our freedom and way of life.