Fantasy Baseball Week That Was & Will Be: No-No For Everyone 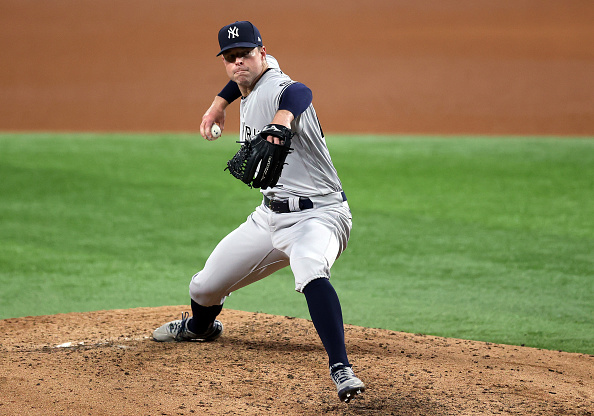 Not one, but two no-hitters, highlight the Week That Was and Will Be.

For the Week That Will Be:  The home start against Toronto is dangerous but when you pair it with the start at Detroit, you can run Kluber out there with confidence.

Tyler Mahle :  Tyler Mahle got tattooed Thursday giving up 7 runs and 9 baserunners in just 2 innings.  Eek.  This dud raised Mahle’s ERA to 4.20 and his WHIP to 1.29.  So, which is the real Mahle – the one who pitched batting practice this week or the one who was on the rise before the dud?  I like 54 strikeouts in just 45 innings and have no quarrel with the 40+% ground ball rate or the 11+% swinging strike rate.  I also like that his SIERA sits at 3.70, his hard-hit rate is down from a year ago and that the fastball velocity is up a bit.  In all, I would give Mahle a mulligan and keep sending him up.

For the Week That Will Be: The advice to keep sending Mahle up applies to this week’s two-step at Washington and at Chicago.  Both teams have the potential to explode but neither has been doing so consistently.

Merrill Kelly :  Merrill Kelly was the hard luck loser Thursday after he tossed seven innings of three run ball walking no one and striking out 12 Dodgers.  On the year, Kelly’s 5.05 ERA and 1.37 WHIP are hard to look at.  He is getting the K’s (46 in 51 IP) but there is not much more to like, especially when you zero in on his sub-par swinging strike and first pitch strike rates and a high contact rate.  Yes, he had a good game Thursday but one game does not a season make.

For the Week That Will Be:  Kelly gets SF this week.  While I would ordinarily say to roll the dice on that one, I refer you to what happened to the Mahle fantasy managers who took that tack.  Keep Kelly on the bench if you can this week.  If he looks good again, maybe it will be time to risk it.

Austin Riley :  Austin had a huge day Sunday going 2-4 with 2 runs, 5 RBI and two dingers.  Quite a day at the office.  On the year, Riley has some pretty gaudy stats:  .320 with 9 dingers and 21 RBI.  Riley is just another example of avoiding being that person who writes off young players because they struggle at a young age.  Had you done that when he hit .226 and made little contact in 2019 at the age of 22 you would be missing out on the success of 2021.

For the Week That Will Be: Plug and play.  When you see a player, who is hitting the ball harder while chasing less often and making more contact, you are on to something.

Spencer Turnbull :  Like all fantasy analysts, I have my hits and misses and try to have more of the former but predicting future performance ain’t that easy.  I promise that during 2021 I will own the misses and try not to pat myself on the back on the hits . . .  except this time so humor me.  Last week we wrote: “Spencer Turnbull had a good outing this week throwing six innings of one run ball while striking out seven.  On the year, Turnbull’s ERA sits at a middling 3.91 but his FIP is almost a run lower and WHIP looks just fine at 1.22.  Let’s take a quick look behind the curtain.  What do we find?  We see that the advanced numbers support more success:  50+% GB, decent swinging strike rate and a vastly improved first pitch strike rate with a steep reduction in hard hit rate.  Glad we looked!  For the Week That Will Be:  Turnbull is slated to face Seattle.  Even with Kelenic on board, I will confidently start Turnbull this week.”  Hello!  You probably know what happened next – Turnbull threw 2021’s FIFTH no-hitter while striking out 9.  Well, it took only one great outing to bring that ERA (now 2.88) in line with his FIP (now 2.76).  Of course, it does not always work so well, but I hope you started Turnbull this week.

For the Week That Will Be:  With home starts against Cleveland and the quite banged up Yankees, this could be another very good week for Turnbull.  (final thought – you have to like that ground ball rate over 54% and that first pitch strike rate over 70%).

If you did not get the pitchers you want, consider these middle relievers on teams with weak or unsettled closing situations or potential openings in the rotation:  J.P. Feyereisen, the new Tampa Bay Ray, and his 17% swinging strike rate and almost 50% ground ball rate; David Peterson and his ground ball ways toiling in Queens.

If you are in the mood to gamble, how about Owen Miller, the newest face in Cleveland, a team that could seriously use some offense?

The moment you have been waiting for (just play along) -- Schultz says: “Schultz has long been a proponent of the Tony Gwynn Theory of Rotisserie Baseball. In fact, Schultz has espoused this philosophy for so long, it’s updated christening as the Ichiro Suzuki Theory has outlived its usefulness as apt nomenclature. Schultz is unsure who should carry the eponym forward, so to adapt it to the real-world baseball vernacular, we’ll just go with the Player To Be Named Later Theory. The classic theory is that the time to trade for Tony Gwynn (when that was a thing you could do) is not when the perennial batting champion is hitting .333, it’s when he’s hitting .220. Since you know where his average is going end up, why not enjoy the ride.

As he’s already hit 12 home runs, it’s easy to overlook the fact that the reigning, defending, conquering NL MVP Brock Les . . . oops sorry, got carried away there, Freddie Freeman is only hitting .241 and even more so since he was flirting with the Mendoza line just a couple weeks ago. Even though it feels like he’s always above .300, the anchor of an exciting Braves lineup is a career .291 hitter and there’s no reason to think that’s not where he’s going to end up in 2021.

Similarly, while he’s never threatened to win a batting title, Manny Machado ’s .225 is a significant standard deviation below where he typically ends the season. A career .280 hitter; when you set aside the COVID season, he has been a .300 hitter, meaning Machado seems primed to go on a tear. Even more reason to think this will happen when the Padres get healthy, both from a physical and epidemiological standpoint, and he gets to hit amidst Trent Grisham, Fernando Tatis, Eric Hosmer and Wil Myers .

It would seem appropriate to put Francisco Lindor and his .200 average on this list. However, in the back of Schultz’ mind is that SMART theory addendum that recommends staying away from players who have just switched teams. Also, in the forefront of Schultz’ mind is the fact that the Indians don’t make foolish trades. Corey Kluber ’s no-hitter notwithstanding, the Tribe customarily makes out on trades on which they are initially mocked. Just ask any Mets fan how the Carlos Baerga and Roberto Alomar trades worked out. It’s frankly surprising that the Mets picked up the phone when Mike Chernoff called. Ultimately though, it’s not like Lindor is going to get worse.

If there’s a team owner in your league that is starting to lose faith in what was surely a significant investment, perhaps there’s a dollar to be had for two quarters and a dime.”

Response:  Nicely done!  It seems the Baron of the Bottom of the Page spent some time during the pandemic saving up quality writings!