Fantasy Baseball Week That Was & Will Be: Ray of Light 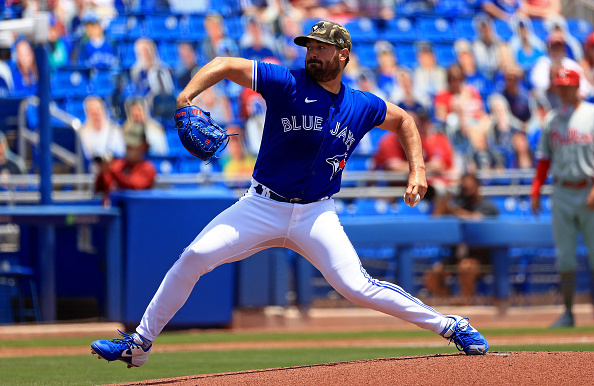 Robbie Ray doing his best Greg Maddux imitation highlights the Week That Was and Will Be.

Robbie Ray :  Robbie Ray gave up 4 earned runs in 5 and 2/3 innings to get a win on Sunday.  However, the story is that he struck out 9 and walked only 1.  Ray used to do his best Charlie Sheen “Wild Thing” impression when he toed the rubber.  Now, he is just a different pitcher.  Get this:  42 strikeouts against 1 walk.  No, you do not need new reading glasses!  In Ray’s last 30 and 1/3 innings, he has a 42:1 K/BB ratio.  Dang!  His new found control is supported by a much higher first pitch strike percentage.  Indeed, 2021 is the first time the lefty has been over 60%.  I am buying it.  (ps, credit to Rick Wolf for getting on the Ray train early).

For the Week That Will Be: There is no doubt I run Ray out there against the Rays next week (yeah, you saw what I did there).

Drew Smyly :  Drew Smyly had a nice outing this week tossing six quality innings while giving up just four hits and one run.  Oh, and he added six punchouts for good measure.  That is the good news.  The bad news is that the quality outing “dropped” his ERA to 5.23 ERA and his WHIP to 1.35.  Actually, when you take a quick look, the weak ratios are no surprise given that his swinging strike and ground ball rates are both down a lot and his hard hit rate is up.  Frankly, I am concerned about the prognosis.  Smyly has a questionable health record and now pitches in Atlanta – a park not nearly as forgiving as San Francisco.

For the Week That Will Be: All of the above said, I don’t hate home start v. Mets but recommend proceeding with caution on a week to week basis.

Sandy Alcantara :  Alcantara was obliterated this week giving up 8 runs in just 1 and 1/3 innings. Ugh.  This ugly start pushed his ERA over 4.00.  All is not lost however.  On the year, Sandy still has his solid ground ball rate, his swinging strike rate is way up (over 14%) and his barrel rate is way down.  Throwing more change ups seem to be helping him get to the next level as the pitch gets a ton of ground balls and swinging strikes.

For the Week That Will Be: As we say on Colton and the Wolfman on SiriusXM every Tuesday night: “Keep sending him up!”This is a talented pitcher on the rise who just had a bad day.

Spencer Turnbull :  Spencer Turnbull had a good outing this week throwing six innings of one run ball while striking out seven.  On the year, Turnbull’s ERA sits at a middling 3.91 but his FIP is almost a run lower and WHIP looks just fine at 1.22.  Let’s take a quick look behind the curtain.  What do we find?  We see that the advanced numbers support more success:  50+% GB, decent swinging strike rate and a vastly improved first pitch strike rate with a steep reduction in hard hit rate.  Glad we looked!

For the Week That Will Be:  Turnbull is slated to face Seattle.  Even with Kelenic on board, I will confidently start Turnbull this week.

For the Week That Will Be: Coming off of a game like this, you can count on the Phillies using Maton’s flexibility to get him into the lineup for players who are cold, dinged up or in need of a day off.

If you did not get the pitchers you want, consider these middle relievers on teams with weak or unsettled closing situations or potential openings in the rotation:Paul Fry and his 60+ ground ball rate behind soft-tosser César Valdez or Michael Fulmer and his big jumps in ground ball and swinging strike rates (as well as improved velocity) behind an unproven Gregory Soto .

If you are in the mood to gamble, how about Miguel Andújar .He has done nothing since 2019 but he raked then, is still young and the Yankees have Hicks, Stanton, Urshela and Torres injury concerns and have already shipped out Mike Tauchman .See also the above-mentioned Nick Maton (sorry for digressing into lawyerly writing there).

The moment you have been waiting for (just play along) -- Schultz says: “If The Good, The Bad & The Ugly were about fantasy baseball, Eli Wallach would have squinted at Clint Eastwood (who would have squinted right back) and told him “Blondie, there are two kinds of people in this world: those who pour over statistics and those who just know when something good is gonna happen.” Setting aside the fact that this would still likely end with Eastwood reminding Tuco that the world is divided into people with loaded guns and those who dig, Schultz wonders whether there’s more to The Week That Will Be than The Weeks That Were.

What the past can tell us is that, right now, perhaps the greatest gift to any pitching staff – in real life and the fantasy realm – is a road trip through the Midwest that includes visits to Progressive Field in Cleveland and Comerica Park in Detroit. While batting averages are down all across the major leagues, the Indians are puttering along with a .209 team batting average and the Tigers are only doing slightly better, hitting a collective .221. (It’s worth mentioning that the Yankees are only hitting .223 but they hit a TON of home runs, so it’s easy to overlook). To go with the woeful hitting, the Indians and Le Tigre are in the bottom fifth of the league in runs scored. While the Tigers strike out a prodigious rate, the Indians seem to defy mathematics – although it seems that they strike out a dozen times a night, only three teams in MLB have whiffed more.

It’s a bit of a no-brainer to recommend that you pitch your starters against weak-hitting teams. However, if the first six weeks of the season have taught us anything that avoids statistical analysis, it’s to make sure that you not only have Zach Plesac in your starting lineup but anyone pitching against him. In Plesac’s last outing against Seattle (the worst of the worst hitting teams), he took a no-hitter into the 8th. However, in his other 7 outings, he’s watched Carlos Rodón and Wade Miley throw no-hitters. Run all the numbers all you can find, they won’t add up. Yet, if Plesac’s on the mound, there’s a good chance someone’s getting no-hit.

Response:  It is true, the team from Cleveland is who you want picking up the lumber when your pitcher in on the bump. (ps, I admit it, I don’t get the Arch Stanton reference but I am sure that will provide Schultz with fodder for next week’s entry).