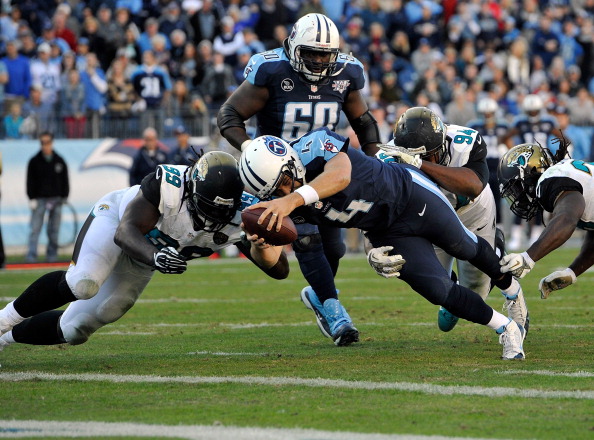 Do you want to play with the leader in one-day fantasy sports?

Well, now you can. FanDuel is making a special offer to all of Fantasy Alarm Nation. If you create a new account with the leader in one-day fantasy sports, FanDuel.com, you will receive TWO MONTHS FREE of the DFS Playbook PRO FREE! Just follow the link and the directions to redeem the free two month offer!!

Get in the game. What are you waiting for?

Picking a team defense is a fickle thing, and fantasy football is fickle endeavor to being with. But because the performance of a fantasy defense is so dependent on the offense it is facing, there's a high degree of variance in defensive performance. Good defensive players help to be sure, but a bad quarterback on the other side is arguably more important that a team's own defensive staff. And defensive touchdowns are impossible to predict, but they can have a huge impact on a defense's fantasy output. For that reason, I'll often find myself leaning toward the cheapest defense I can live with in DFS. When the offensive players I like happen to allow for a premium defense, I'll go in that direction. But given the finecky nature of defensive fantasy scoring, I generally prefer to spend my money in spots where I can be more sure about what I'm going to get for it. That said, let's take a look at some stats and the week's best defensive options.

Miami Dolphins - The Seahwaks finished 2014 as the top ranked team in Football Outsiders' DVOA, and they're facing the Rams who have the lowest team total of the day according to Vegas. The problem is that Seattle is obviously expensive. For that reason, the Dolphins may be the top play of the week. The addition of Ndamukong Suh should obviously help a defense that finished squarely in the middle of the pack in terms of DVOA last season. They also have a very good matchup against the Redskins who were the second most fantasy-friendly team to opposing defenses last season. Wahsington's QB, Kirk Cousins, has a career interception rate of 4.4 percent, which is quite a bit higher than last year's league average of 2.5 percent.

Carolina Panthers - The Panthers were right there with the Dolphins D last year in terms of DVOA, but when you look at weighted DVOA, which gives more weight to late season results, the Panthers defense actuall played up, finishing ninth in weigthed DVOA. They'll get the Jags this week who allowed the most fantasy points to opposing defenses last year. Carolina is too expensive on Fantasy Feud, but they're an option on other sites if you want to pay up for a defense.

Green Bay Packers - Like Miami and Carolina, Green Bay finished 2014 mid-pack in terms of defensive DVOA, so they're not bad defensively. This week they'll draw the Bears who ranked fourth in turnover percentage last year. Jay Cutler is no stranger to interceptions, and he threw 18 last year, the second highest total of his career.

Tampa Bay Buccaneers - Tampa was another team that finished mid-pack in terms of defensive DVOA last year, so they're competent. They'll have the pleasure of facing the Titans who have the third lowest team total of the day according to Vegas. A big part of that is rookie Marcus Mariota making his first career start. But it's not just about Mariota. Bishop Sankey is still starting at running back after a disappointing rookie season. Harry Douglas and Kendall Wright are their top wideouts. They simply don't have good weapons. Delanie Walker may well be their best offensive player.

Jacksonville Jaguars - Go with me here. Jacksonville finished 2014 20th in defensive DVOA, and they finished 16th in weighted DVOA, so this isn't a bad defense. Their matchup with Carolina is slightly below average according to the Vegas totals, but the Panthers were the ninth most fantasy-friendly offense to opposing defenses last year. Without Kelvin Benjamin, this offense won't be the same. Philly Brown and Ted freakin' Ginn are starting at wideout, so the Panthers don't bring any terrifying weapons to the table.

San Diego Chargers - This one is a little more scary, and you can have the Jags for the same price or less on every site, so there's little reason in rostering the Chargers. But the case for San Diego's D is that the matchup isn't bad despite the weapons the Lions have. Detroit allowed the 18th most fantasy points to opposing defenses last year, and Detroit's team total in Vegas this week is below average. Again, the risk isn't necessary, but that's the case for the Chargers.