Ben Scherr pores over all of the statistics, splits, and matchups to uncover the very best DFS MLB Stacks for today's contests. 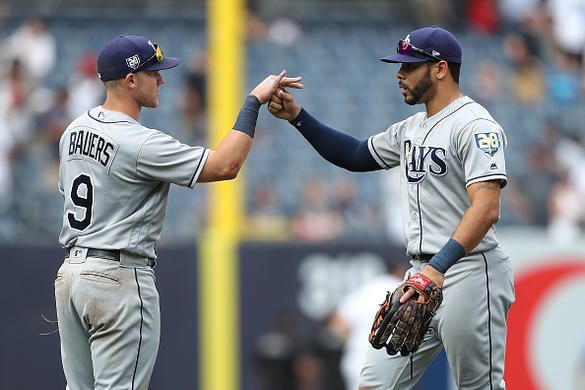 **Please note that there are legit weather concerns in Washington, Pittsburgh, and Cincinnati today.  While they may try to squeeze those games in on getaway day, I would rather ignore them over worrying about it during NFL opening day.**

Won’t go into too much detail since it’s more about NFL today, but with rain concerns for MLB, and deGrom taking the mound, the choices may be a little limited for stacking.  The Rays check in with a 10-game home winning streak, and will look to sweep the O’s after outscoring them 24-7 (hopefully the same score of the Bears win over the Packers tonight) over the first two games of this series.  The O’s are starting Rodgers for the third time this year, and possibly last time, but it’s more about the Rays value bats.  Tommy Pham will likely be the highest cost Rays option and has three triples and a homer over his last five games, while also batting .381 over his last ten.  Ji-Man Choi and Jakob Bauers are your cheap 1B options, with Choi being the hotter, and more expensive bat, but Bauers has reached base four times, and has three runs in this first two games of this series.  Kevin Kiermaier is cheap on FD, and may have to wait for lineups to come out to find that fourth player to use in a Rays stack.

KC/MIN if taking deGrom or Clevinger

With deGrom and Clevinger well above the field in regards to pitching, I think finding the cheap bats is the right move over finding the cheap pitcher that could take a perfect game into the 9th (I did have Lopez in the playbook fyi).  I think this game goes back to it’s Friday night type of game which means we’ll see some runs.  Kennedy is making his first start for KC since 7/10, and was 1-8, with a 5.13 before his injury.  On the other side, De Jong is making his first start since being traded to the Twins, and had a 6.35 era last season in the majors.  Eddie Rosario will be your high priced option from this game, and is 8-19, with a homer off of Kennedy, while a large number of other Twins have also taken him deep.  After Rosario, you pretty much have no other top priced bat, and will likely come down to your personal preference plays.  Have to keep in mind that today is a NFL day, and those playing MLB will be very smart players, so trying to be different today is key for gpp’s.

Indians with Rowdy Tellez from Toronto before his price jump

Why Rowdy Tellez ?  He’s the first player in roughly 100 years to have six doubles as his first six hits, and then added a homer last night. Expect his price to jump up tomorrow, but if not wanting to ride his bat, Yonder Alonso is roughly the same as him on DK.  Cleveland is rolling, and facing Pannone today, who followed up his one hitter over seven innings debut by allowing seven runs in his second start, but of which were vs the O’s.  I do think the Indians could start their “B” team today, so this is more about the opposing pitcher and spot for Cleveland over their bats. Having said that, you can’t go wrong paying up for Lindor and Ramirez, but it’s best to really look for value bats in good spots today.

While I don’t mind the big bounceback spot for the Cards, I’d rather ride the hot bats in Mike Trout and Shohei Ohtani .  Trout went 5-5 with two homers last night, and as mentioned in the playbook yesterday, Shields wasn’t going to pitch around him.  I can’t say the same for Lopez though, which I why the Angels aren’t in the top part of this piece.  Ohtani is 7-12, with a triple, three homers, and nine rbi’s over his last three games.  Both face Lopez, who is winless at home since 6/26.  Could add in Andrelton Simmons , and a Kole Calhoun to complete the four pack.  I don’t mind the White Sox as a full game stack play, as Heaney is 1-6, with a 5.02 era on the road this year.

FanDuel tried to “even the playing field” by removing the game at Coors in their main slate today, but could target it on DK.  Plenty of routes to take on both sides of this game, and after two low scoring contests, I think we see some runs today.  Justin Turner is 12-24, with a homer off the lefty Anderson, while Charlie Blackmon is 9-18 in the L/L matchup vs Hill if looking to go with the Rockies more.  Plenty of other top priced bats to take from this game, but if not taking deGrom, you’ll have the salary for them.  If looking for some cheaper options from this game, David Freese from the Dodgers, and Drew Butera as the punt catcher from the Rockies would be my preferred plays.

B. Keller - SP
KC
Brad Keller shut out the Reds for six innings to earn a victory Wednesday.
The Royals bullpen went on to allow four runs after Keller departed, but the team held on to win 5-4. Keller has pitched 11 scoreless innings since coming off the COVID-19 injured list. Unless the Royals change things up some, he'll miss upcoming four-game series against the Twins that starts Friday and again face the Reds next Tuesday. He's still a rather risky play in mixed leagues.
Added 11:20 pm (EST)
Added 11:20 pm (EST)

T. Rosenthal - RP
KC1
Even though he walked the bases loaded, Trevor Rosenthal escaped with his fourth save Wednesday against the Reds.
Thanks to the decision to remove Joey Votto for a pinch-runner earlier in the contest, it was Christian Colon who ended up batting for the Reds down a run with the bases loaded and one out in the ninth. He grounded into a game-ending double play. Before that, Rosenthal walked Josh VanMeter, Shogo Akiyama and Nick Castellanos. His previous out came on a failed sac bunt from Tucker Barnhart. That Rosenthal threw just 10 of 25 pitches for strikes tonight seems like a bad sign. Still, since he hadn't walked a single batter in eight previous innings this season, we'll give him the benefit of the doubt for now.
Added 11:16 pm (EST)
Added 11:16 pm (EST)

W. Miley - SP
CIN
Wade Miley lasted just 1 2/3 innings and gave up one run Wednesday against the Royals in his return from the IL.
Miley didn't figure to pitch deep into tonight's game, but the Reds were hoping for more than five outs. He walked two, and just 22 of his 44 pitches were strikes. Miley will probably remain in the rotation for now, but Tyler Mahle quite likely would prove to be an upgrade.
Added 11:14 pm (EST)
Added 11:14 pm (EST)

S. Perez - C
KC1
Salvador Perez went 3-for-5 with a homer, a double and three RBI against the Reds on Wednesday.
Perez grounded out in the ninth while needing a triple to complete the cycle. Perez is off to a nice start after missing all of 2019 and also spending time on the COVID-19 list during summer camp; he's batting .329 with four homers in 82 plate appearances.
Added 11:10 pm (EST)
Added 11:10 pm (EST)

A. Slater - RF
SF
Austin Slater was unavailable to play Wednesday due to sore right elbow.
Slater first felt the soreness during Tuesday's game and he was scratched Wednesday after he was unable to get loose. He'll be re-evaluated when the Giants return home this weekend. Slater has been a bright spot in the early going with a 1.076 OPS, three home runs and five stolen bases.
Added 11:09 pm (EST)
Added 11:09 pm (EST)

T. Barnhart - C
CIN
Tucker Barnhart went 0-for-4 on Wednesday, leaving him 4-for-28 this season.
Barnhart is splitting time with Curt Casali, who is 5-for-32. The Reds deserve a lot of credit for opening the wallets and spending big last winter, but it sure did seem like Yasmani Grandal would have been a significantly bigger upgrade for them than either Mike Moustakas or Nicholas Castellanos.
Added 11:07 pm (EST)
Added 11:07 pm (EST)

F. Galvis - SS
CIN
Freddy Galvis went 2-for-4 with a two-run homer Wednesday in a losing cause against the Royals.
The homer off Ian Kennedy was Galvis's third of the year. He hit 23 last year, but given his limitations in the other categories, he's not really much of a mixed-league option.
Added 11:05 pm (EST)
Added 11:05 pm (EST)

R. Acuña Jr. - RF
ATL1
Ronald Acuna has been ruled out through the weekend after being diagnosed with inflammation in his left wrist.
He's already missed two games, so he'll have missed at least five contests. The good news is it doesn't appear he's dealing with any structural damage. The Braves are hopeful that Acuna will be fine after a few days of rest before returning to the lineup early next week.
Added 11:02 pm (EST)
Added 11:02 pm (EST)