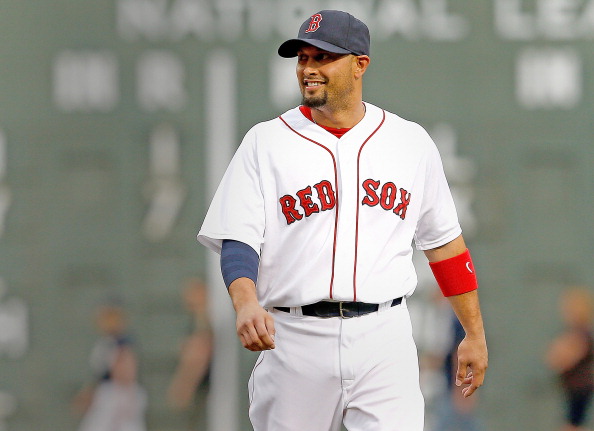 With pitchers and catchers having already reported two weeks ago and the last of the position players having trickled in, spring training is almost in full swing. We say almost because the real fun begins once the Grapefruit and Cactus Leagues open. Spring training games are our bread and butter here as the player performances will determine who gets the playing time and who rides the pine, singing “Put me in coach. I’m ready to play.”

We already covered the top-10 position battles to watch – the ones with the greatest fantasy impact – but there have been a few changes already so we’ll hit some of those again while also touching on more situations that should be deemed important, as they will likely impact a number of fantasy drafts over the next month.

Boston Red Sox Outfield Revisited – We thought we had it all figured out as most expected Rusney Castillo and Mookie Betts to handle center and right field respectively with Hanley Ramirez guarding the Big Green Monster. But then manager John Farrell threw a monkey wrench into fantasy owners’ plans when he announced that Shane Victorino, when healthy, would be his starting right fielder. So what happens to Betts? Now obviously the chances of Victorino actually staying healthy for an extended period of time are pretty slim, but is Betts guaranteed playing time when he isn’t? And what happens with Allen Craig and Daniel Nava? It’s probably safe to assume that Jackie Bradley is Triple-A Pawtucket-bound, but Farrell is going to have his hands full with this dilemma. Keeper league owners can continue to draft Betts where he is, but if you’re in a re-draft league, you may want to pump the brakes a little.

Baltimore Orioles Second Base – The job belonged to Jonathan Schoop up until a couple of days ago, but then the Orioles signed Everth Cabrera to a one-year deal and now the question is, where will he play? Schoop showed some fairly impressive power last season as he hit 16 home runs in 455 at-bats, but he also hit just .209 for the season. With the Orioles in dire need of a legitimate leadoff hitter, should Cabrera get off to a hot start this spring, the team could sacrifice some power for speed and allow Schoop to refine his plate discipline in the minors. There’s also the possibility that J.J. Hardy never bounces back and Cabrera lands back at shortstop, but that seems a little on the remote side.

Chicago White Sox Second Base – The hope on the South Side is that Carlos Sanchez is finally ready to handle the full load at the keystone this season. He’s not much for power and his plate discipline was below-average during his call-up last year, but he’s got some decent speed and a great glove. Fellow Triple-A second baseman Micah Johnson is going to get a chance to compete with Sanchez this spring and offensively, the two are probably fairly close to even. Now mix in the return of Gordon Beckham and the signing of Emilio Bonifacio and you’ve got a world-class mess. Ideally one of the youngsters will take hold of the job, but Bonifacio could be the one who ends up with the most work, at least to start the season.

Houston Astros Third Base – Matt Dominguez has some real nice power potential, but the 25-year old has become a whiff specialist and his .215 average last year gave the Astros all they needed to make a move and bring in Luis Valbuena to compete for the job. He doesn’t have the stick Dominguez has, but he’s definitely got a superior glove. So much so that manager A.J. Hinch has indicated that Dominguez should probably learn first base as well because versatility could be the only way he makes the 25-man roster out of camp. Dominguez is not only going to have to prove his defensive worth this spring, but he’s going to need to hit with some consistency if he wants to get a legitimate look.

Minnesota Twins Center Field – Given the fact that neither of the two have much in the way of power and both play a defense-first, speed game, Aaron Hicks and Jordan Schafer could end up in a straight lefty/righty platoon. Ideally, manager Paul Molitor would prefer to have one guy lead the charge, but with neither player expected to really out-shine the other, he may not have much of a choice. If ever there was an open door for Byron Buxton, this would be it.

Seattle Mariners First Base – Woe is the man (or woman) who relies on the Mariners first base situation for fantasy purposes. Logan Morrison may be a great follow on Twitter, but his inability to hit lefthanded pitching with any sort of consistency. He’s not much better against righties, but at least he hits for power against them. Super-utility man Willie Bloomquist could have helped, but he’s out with a knee injury at least until early April. The team’s other option is Jesus Montero. He came into camp in much better shape, but unless he starts to hit like he did a few years ago before his first call-up to the Yankees, he’s not going to be able to carve out anything more than a platoon. This situation could be a mess all season.

Texas Rangers Left Field – It looks like this battle will come down to Michael Choice and Ryan Rua. Sure, Jake Smolinski and Ryan Ludwick are also competing, but the Rangers best chances seem to come with Rua and Choice. Rua’s 28-game call-up last season wasn’t bad as it ended with a .295/.321/.419 slash line, but they’d love to see him hit for a little more power. Choice has shown some promising power potential, but the plate discipline in the majors is seriously lacking. It’s very possible that Rua ends up with the starting nod on Opening Day, but he’s really going to need to show something if he wants to have the gig all to himself this season.

Toronto Blue Jays Designated Hitter – Two weeks ago, the Blue Jays were set on having Edwin Encarnacion be the DH to help preserve his health, but John Gibbons changed his tune this past week and said that Encarnacion would be his starting first baseman. That means the Jays are looking at Justin Smoak, Danny Valencia and Dioner Navarro for the DH job. Navarro, a switch-hitter, has already asked out of Toronto to pursue a regular catching gig somewhere else, so that could leave the Jays with a straight, lefty/righty platoon of Smoak and Valencia. On their own, neither has the ability to hold the job, but together, the two could fuse together and become a rock solid ball player.

Arizona Diamondbacks Catcher – In truth, this is not a very pretty group competing for the job. Tuff Gosewisch is the incumbent right now as he served as Miguel Montero’s back-up last year, but he lacks power and his plate discipline is shaky at best. Competing with him is Oscar Hernandez who hasn’t even reached Double-A yet and Peter O’Brien who has fantastic power potential but has the plate discipline of an over-anxious six-year old hacking away at T-ball. With Jordan Pacheco potentially on the roster, the team may opt to send both Hernandez and O’Brien back to the minors for more seasoning, but should one stay, expect it to be O’Brien for his edge in experience and power.

Atlanta Braves Left/Right Field – With Nick Markakis on the shelf and recovering from neck surgery, the Braves can mix in Jonny Gomes, Eric Young, Jr. and Zoilo Almonte between the two corner outfield spots. But what happens once Markakis returns? Young has a strong speed element and the versatility to also play second base so he’ll stay in the mix. Gomes is strong against lefties and still has some decent power numbers against right-handed pitchers. And Almonte, a switch-hitter, has shown a little bit of pop in his bat with average speed. The three-man situation should work to open the season as none of the three are projected to win anything out of spring training, but once Markakis returns, someone is going to land back at Triple-A.

Colorado Rockies Catcher – We all know that Wilin Rosario’s defense is beyond atrocious. But he continues to hold the starting job for the time being because the Rockies are hoping that last year’s horror show was just a fluke. But even if it was, the team wants/needs to move Rosario to first base which will happen a fair amount this year, so back-ups Nick Hundley and Mike McKenry will fight it out for the primary back-up job. Hundley probably has the edge with the experience and the power potential at Coors, but his health has always been a huge question. Expect the two to battle it out this spring with the loser heading to the minors.

Philadelphia Phillies Left Field – Can Grady Sizemore stay healthy? Can Darin Ruf stop striking out? These will be the two primary questions in Phillies camp this year as they search for a consistent left fielder. We already know the potential for Sizemore, though we all probably still wish it were as good as it was back in the day, but Ruf is still a bit of an unknown. Not so much of an unknown but more of a question mark. We know there’s power potential lurking, but unless he can cut down on the strikeouts and improve that overall plate discipline, he’ll never be anything more than a right-handed bat off the bench.