Fantasy Football Target Watch: What Can Brown Do For You? 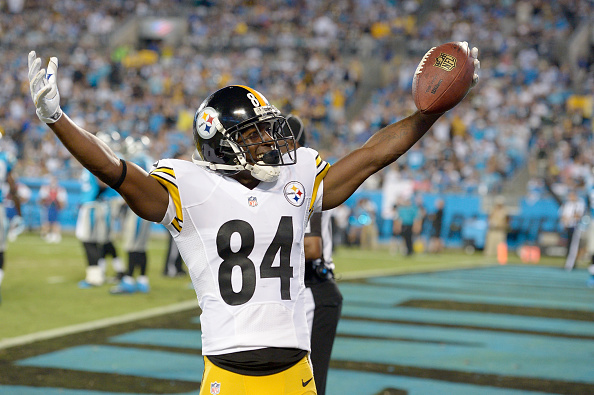 While most fantasy owners drool over the likes of Demaryius Thomas, Jordy Nelson and even Calvin Johnson, the receiver who could turn out to be the biggest fantasy stud of them all is Pittsburgh’s Antonio Brown. Having seen 29 targets over the last two games, the 26-year old, fifth-year veteran has now, by a significant margin, taken the lead as the most targeted receiver in the NFL. Obviously it helps when your quarterback throws for 862 yards and 12 touchdowns over the last two games, but those who may be expecting the Steelers offense to come back to Earth and have the aforementioned big three wide receivers pass Brown on the leaderboards could be in for a rude awakening.

Of course, Ben Roethlisberger isn’t going to average 400-plus passing yards and six touchdowns per game, but don’t expect the offense to slow down and don’t expect Brown’s numbers to tail-off at any point. With the support of a strong ground game led by Le’Veon Bell, the development of Martavis Bryant and Markus Wheaton and a slight re-emergence of Heath Miller, Big Ben and Brown are going to have ample opportunities to connect on the field. Defenses simply cannot afford to try and double-cover Brown as Roethlisberger has shown that he trusts the youngsters almost as much as he does Brown. OK, maybe not as much, given Browns years of dedicated service and a career 64.1-percent catch rate, but enough to keep Brown in plenty of one-on-one situations.

If your league’s trade deadline has not passed and you find yourself in the enviable position of having an abundance of running backs, might I suggest that you target Brown for your upcoming fantasy playoffs. Yes, there’s a bye in Week 12, but the match-ups over the next several weeks are just too juicy to pass up. In fact, save for Kansas City in Week 16, there’s not a single opponent who should concern you as an owner. Act now if you can as you know that Brown is just licking his chops with the Jets coming up this Sunday.

When Percy Harvin was traded to the Jets, I opined that he would see a major increase in targets right from the onset and a healthy boost in his overall fantasy value because of that. Sure, the Jets stink, but that doesn’t mean there can’t be strong individual performances, right? While Harvin’s debut in Week 8 wasn’t anything special, his second game here was pretty damn sweet even without finding the end zone. His 11 targets led the team and the fact that he turned them all into catches made it even better. He’s a strong yards-after-the-catch receiver and should continue to see the majority of looks come his way over the rest of the season. That means strong yardage, some likely trips to the end zone, and a value in fantasy much greater than what he had in Seattle. An injury risk? Sure. But so is everyone else. Those of you in PPR leagues will want to get a piece of him if you’re looking to add a receiver via trade.

Not to torture you with lingering Jets talk, but you also cannot ignore the fact that Eric Decker should also see an uptick in fantasy value now that Harvin is settling in. Defensive coverage will have to swing away from Decker throughout the game which should help free him up for more targets. Given the lack of other viable receiving targets on the team, you have to expect that Decker and Harvin will garner almost all of the looks regardless of which quarterback is under center, and considering how much offensive coordinator Marty Mornhinweg likes to throw the ball, both could be averaging double-digit targets per game by season’s end.

It was a big passing day for the Bucs this past week, but keep in mind that they will be switching quarterbacks again this week as Josh McCown returns from his thumb injury and takes over for Mike Glennon. The target distribution should be the same, but the on-field rapport will probably need a little extra time to re-connect. Good thing they face the Falcons this week, amirite?

It might not be long before rookie Odell Beckham turns into the Giants’ new No. 1 receiver for the duration of the season. He and Rueben Randle saw the same number of targets, but it won’t be long before Eli Manning starts to tire of all the drops. As you look at the Overall targets Leaderboard below, you’ll see Randle’s 55.1-percent catch rate is well below the league average which tends to hover around the 60-percent range. Beckham may still have some rookie ups and downs, but Randle isn’t exactly a seasoned veteran himself and could see fewer looks if he doesn’t shape up.

It looks like David Carr has found a new favorite target over these last two weeks as Mychal Rivera has, over the last two games, turned 20 targets into 15 catches for 121 yards and two touchdowns. It’s very possible that this trend continues this week as the Raiders will undoubtedly be playing from behind and the Broncos are allowing an average of almost eight catches for 65 yards per game to opposing tight ends. If Rivera can match that yardage and maybe find the end zone once again, he’ll be a solid play for fantasy owners this week.

Andre Johnson, WR HOU – While the Texans are on a bye this week, Johnson owners may have more to worry about than just a need for a one-week replacement. Head coach Bill O’Brien announced Wednesday that he is going with Ryan Mallett as his new starting quarterback, beginning in Week 11. Now obviously, a deviation from Ryan Fitzpatrick isn’t a mind-blowing thing, but as we often see during most QB switches, the third and fourth receivers often gain more prominent roles due to their constant work with the back-up QB at practice. That’s not to say that DeVier Posey and Damaris Johnson are going to see more targets than AJ, but we could see his target rate drop a little while Mallett adjusts to working more with the first-team. Of course, the bye week here should help the rapport, but AJ is going to have to actually practice more regularly to help things along.

Andrew Hawkins, WR CLE – The moment many of you have been waiting for is nearly upon us as Josh Gordon is just a mere two weeks away from returning to action. While Browns coach Mike Pettine said the team wouldn’t force the ball to Gordon, everyone knows he’s one of the most gifted players in the league and will automatically command much of Brian Hoyer’s attention. That means Hawkins is set to see his target rate take a significant turn for the worst. He’ll continue to see more work than the other receivers, especially over the next week or so with Jordan Cameron dealing with a concussion, but he will quickly be supplanted as the team’s No. 1 guy.

Mohamed Sanu, WR CIN – Have you sold on Sanu yet? If not, what are you waiting for? For the first time since the season opened, A.J. Green is not listed on the Bengals’ injury report. Sanu should still see some decent target numbers as the team’s No. 2 receiver, but that 30.8-percent red zone target rate is going to drop significantly over the next few weeks as Green and Andy Dalton will rekindle their on-field bromance.

Brandon Marshall, WR CHI – Speaking of rekindled bromances, it looks like Marshall and Jay Cutler have gotten back on the same page, particularly inside the red zone. Two weeks ago, tight end Martellus Bennett was leading the team in red zone targets rate and both he and Matt Forte were garnering a significant chunk of the looks inside the 20. But just two games later, Marshall has seen his target rate climb to 30-percent which, for now, equals that of Bennett, but will likely continue to rise.

Atlanta Falcons at Tampa Bay Buccaneers – Nothing makes a fantasy owner smile more than seeing two of the more hapless pass defenses square off against each other. The Falcons, who rank 30th in the league against the pass, will have to contend with Vincent Jackson and Mike Evans while the 31st ranked Bucs defense is forced to try and contain Julio Jones and Roddy White. Neither team has a particularly strong ground game either which just makes the match-up that much tastier. If you’re a daily fantasy player, consider any of these receivers to be strong plays this week.