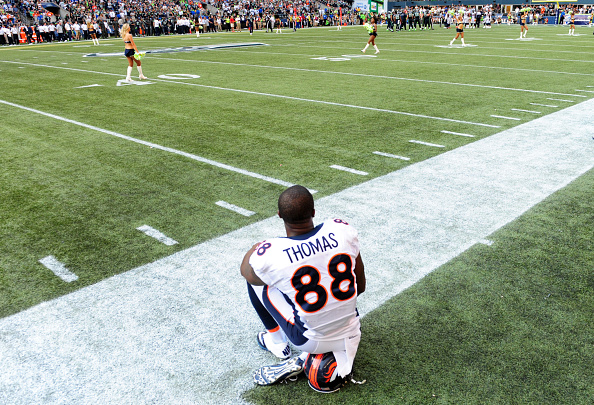 Having a successful draft isn’t just about coming away with a bunch of players you like and expect to do well this year. It’s about building a team for the long haul. It’s about building a team strong enough and deep enough, that you can withstand almost anything. Sitting on a slow-starting Matt Forte? That’s okay. Your receivers are putting up killer points right now to help you weather the storm. Demaryius Thomas not earning his keep? No problem. You’re deep at the running back position and were smart about your choice at tight end. Despite some early shortcomings, you’re still covered because you listened to the advice you solicited, you had a strong game plan and you walked out of your draft with your head held high.

But maybe that’s too utopian for you. Maybe you failed to heed the sage advice of those who do this for a living and you took a quarterback or tight end too early and have no depth at the positions that matter most. Maybe your draft room zigged when you thought everyone was going to zag, you panicked and took a guy way too early thus slighting yourself elsewhere. Maybe you got swept up in the raging river of injuries that crushed so many in Week 2 that your roster is littered with an array of season-ending IR candidates.

Or maybe you just have that sickness that compels fantasy owners to excessively trade and blindly turn over their rosters at every chance they get.

::dramatic pause, stares into the eyes of those guilty of that last statement::

Whatever the case may be, trading is always a huge part of the fantasy game. Everyone loves to talk deal and in some cases, may follow through with their continuous trade banter. But please, people – for the sake of sanity, both yours and mine, take the appropriate time necessary to actually think your deals through. Don’t just think about how a particular deal will help you in the now. Think about how it’s going to help….or in a lot of cases, hurt….you in the long run.

All too often we see deals made that just boggle the mind. If you’re short at running back, don’t trade your best back for another back and a good wide receiver. Don’t trade away starters from your roster to shore up your bench depth. If you trade a superstar, you either get a superstar in return or multiple guys just one tier below.

Seriously, and I can’t stress this enough – if you’re going to sell a high-end player, you don’t do it after a bad week. Personally, I wouldn’t be trading my first or second-round pick just three weeks into the season, but if you are so compelled to make such a rash move, you don’t do it after he puts up a crappy week for you. Think about it. Who’s more likely to fetch you a bigger return – a guy coming off a 12-catch, 154-yard, two-touchdown game or a guy who just caught one pass on six targets for 18 yards?

It may sound like common sense, but there are far too many people out there with their hand on the panic button. Jordy Nelson catches five passes for 59 yards? Time to trade him. Demaryius Thomas has just one touchdown in three games with no 100-yard games? Dump him. Matt Forte has no touchdowns? Drop him like a hot rock. Again, it may sound stupid to some of you, but these are the cries of the masses and these cries need to be stifled.

It’s not that you can’t or even shouldn’t deal these players away, but if you’re going to , you need to wait until they bust out. You have to learn to let go at the appropriate time. If you feel the need to trade Nelson, then you do it the day after he hauls in 209 yards and a touchdown, not 59 yards and bupkus. If you start offering up a superstar after a lousy week, you’re not getting superstar return value. Plain and simple.

And what’s worse is that at some point, you’re going to get so frustrated over not making a deal that you’re going to accept one of the crappy offers that comes your way. You’re going to trade out of weakness and desperation and someone like me is going to keep throwing lowball offers at you until you accept my offer of 60-cents on the dollar. And then when I’m sitting in the winner’s circle at the end of the season, that’s you over there, scratching your head, wondering where the heck you went wrong.

Buy low. Sell high. If you need to make it your mantra and say it over and over, then do it. Selling low is your fast-track to Loserville – population: you.