Closer Report: Changing of the Guard 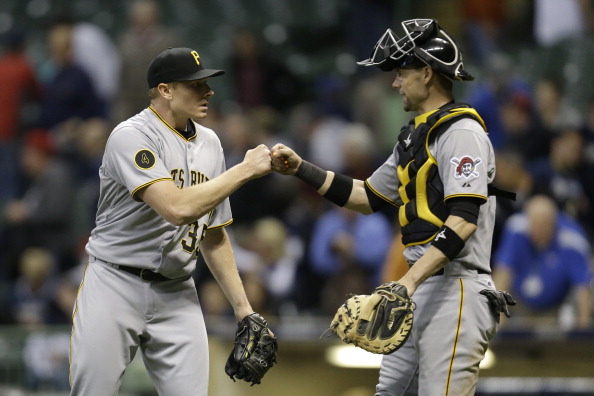 It was quiet around the halls of MLB. A little too quiet, perhaps. The frenzied rushes to the waiver wire led by those who were in dire need of saves had begun to drift into memory as things stabilized for most teams with regard to their ninth-inning specialists. Sure, there were still a few dust-ups here and there, but nothing that was unexpected. But as those breathing a little easier were resting comfortably, having survived the Great Closer Massacre of 2014, there was yet another disturbance in the force. What appeared to have been settled was no longer and those owners of Ernesto Frieri and Jason Grilli found themselves, once again, reaching for their laptops and smart-phones in search of the handcuff they let go.

Most people had written off Frieri after a nightmarish April in which he posted an abusive 7.59 ERA over 10.2 innings, however, manager Mike Scioscia did not. Despite starting to use Joe Smith in different save situations, Scioscia always left the door open for Frieri by utilizing a committee as opposed to just outright replacing him. While the two shared the role, Frieri rebuilt the trust with his manager and ultimately took the job back after recording six saves with a 1.46 ERA over 12.1 innings.

But, of course, the fantasy bliss was but a passing fancy as Frieri turned around and stuck to his owners once again, kicking them in the fantasy groin in just his second outing of the month of June. He coughed up two runs on three hits (one home run – the sixth he allowed this season), pushed his already troublesome ERA to 4.68 and it was all downhill after that. Six runs over six outings later, we’re back to exactly where we were in April – Joe Smith is helping close out games and Scioscia has left us all with another dreaded committee.

So where do we go from here? Is Scioscia of the “fool me once, shame on you, fool me twice, shame on me” mindset? Or is he going to let Frieri finagle his way back into his good graces with another strong run? And what do fantasy owners do? Rinse and repeat? Are we picking up Smith once again and stashing Frieri? If so, is this situation even worth it? Questions, questions and even more questions.

Sadly, yes, to all of the above. Well, maybe not all. Scioscia is going back to that well again, owners do need to grab Smith and you have to stash Frieri. But is this worth it? Probably not. The bottom line is that Frieri can no longer be trusted. There was a time when he was lights-out and no one was touching him, but those days are officially long gone. He may turn around and produce another month like he did in May, but he’s easily just as capable of turning in another April or June. The point of a good closer is not just to accumulate saves, but to also get some assistance with your ratios and maybe a strikeout supplement too. You take a guy like Greg Holland and he’s doing all of that. He’s racking up saves, he’s keeping the ratios in check and he’s helping you with a boost in strikeouts. Frieri has the strikeouts, as evidenced by his 11.05 K/9, but he will now only be seeing, maybe, half the save chances. And as for help in your ratios? “Drop your shorts and bend over, Mr. Babaar.”

The committee situation is a total disaster for fantasy owners as you never know which guy to play. How could you, unless you’re like Baby Nostradamus? Each decision is based on what’s currently happening in the ninth. You can’t predict that. So you either have to start them both to earn the save, or you play a steady guessing game and subject yourself to that idiot Murphy and his stupid Law. While I have never been an advocate of punting a category, there is just too much risk involved. Whatever Frieri gets you in saves and strikeouts, he’s completely negating it by crushing your ratios. And as for Smith, his K-rate is just meh for a reliever and his ratios moving forward are doing just enough that you are neither being helped nor hurt. Let this mess belong to someone else. If you’re sitting there with Frieri and Smith, trade them as a package. See who else may be desperate for saves and target them. Package them up with a bat for a better hitter. Package them up with another arm and get a better starter. Whatever your needs are, target them and hopefully use Frieri/Smith as bait.

As for the Pittsburgh situation, it’s a much easier scenario with which to deal. Jason Grilli is out and Mark Melancon is in. It’s as simple as that. Grilli was handed his job back when he came off the disabled list, he did well for a stretch of time, but after a four-game run in which he allowed four runs on six hits and three walks over 2.2 innings, manager Clint Hurdle had enough. He gave him a shot, went back to the well a couple of times and when the results didn’t change for the better, he gave him the hook. The NL Central has too much going on to start giving away games to rivals like Cincinnati and Chicago.

Melancon, on the other hand, has been money in the bank from Day 1. He was solid in a set-up role to open the season, he notched eight saves while posting a 2.70 ERA over 10 innings while Grilli was on the disabled list, he grabbed two more saves while they were trying to ease Grilli back into the closer’s role and he hasn’t allowed a single earned run since the calendar flipped to June. His current totals – one win, 10 saves, a 1.89 ERA, a 0.78 WHIP and a 29:6 K:BB over 33.1 innings – are the things upon which fantasy dreams are built.

But will Hurdle waffle on his choice? If Melancon stumbles will he allow him to plod through or will he use a quick hook? Probably not. Given Melancon’s skill set, past performance and current totals, it’s doubtful that Hurdle even has to think about it again. Sure, he may have the occasional stumble, all closers do. But stumble over four or five appearances? No. Not likely. Since coming over to the Pirates last season, Melancon has posted a 1.55 ERA with a 99:14 K:BB over 104.1 innings. Not to mention that he has never, during that year and a half in Pittsburgh, given up runs on back-to-back outings. Never. For realz. You can check it.

If you were fortunate enough to grab Melancon off your waiver wire, you’re psyched. If he’s just replacing Grilli and he’s your second closer, then be confident that you’ve got yourself at least one bona fide closer. If he’s a third closer for your team, like many people like to have, then you’ve got great trade bait there. And what’s best is that you don’t even need to find a taker for Melancon. If you have another closer who has more name-recognition and can fetch you a better return value in a trade, then you can deal him. Melancon will be a perfectly fine substitute for him on your roster and might even out-produce him. It becomes an even bigger win for you then as you don’t miss a beat with the closers and you end up improving somewhere else.

Now here’s a look at the Closer Grid, all nice and updated…