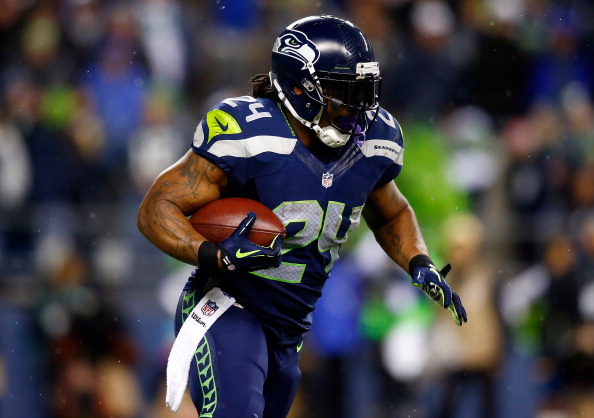 In fantasy football, the running back position has taken quite the hit over the last few seasons. In years past, the advice from nearly every expert was to grab an elite running back with your first pick. Those who touch the ball the most tend to score the most points and when your running back is carrying the rock 25-to-30 times a game while also catching passes out of the backfield, chances are that he’s your high scorer. But with recent trends tilting towards more pass-heavy offensive schemes and committee approaches in the backfield, the fantasy value of many running backs has taken a significant hit.

Of course, there have been a few stalwarts, some old-school throwbacks if you will, who have maintained their status as primary ball-carriers for their team, and those few elites are now the most-coveted in almost every fantasy football draft. Players like Adrian Peterson, Jamaal Charles and LeSean McCoy top the running back depth chart lists every year, not just for their talent level, but because their coaches entrust them with such a heavy workload. Marshawn Lynch of the Seattle Seahawks was one of those guys, averaging 300 carries, 1,350 yards and 12 touchdowns per year over the last three seasons, but in light of recent events, his draft stock and overall expected fantasy value could take a significant hit.

It all began last week at the Seattle Seahawks Town Hall Meeting, a fan event where coaches, executives and often times, players, get together with their season-ticket holders to explain and answer questions regarding the upcoming season. Of course, just coming off a Super Bowl Championship, the Seahawks’ event was front-and-center in the media, not just local but also national. In that meeting, Seahawks offensive coordinator Darrell Bevell dropped a bombshell on both the fan base and the fantasy football community when he said that the team would likely move to the dreaded running back-by-committee approach.

Both Bevell and head coach Pete Carroll have dropped an enormous amount of praise on second-year running back Christine Michael and have said that his role in the offense is going to increase. “He’s just a million miles ahead of where he was in terms of understanding what we want scheme wise, pass protection wise, route wise, and we know he’s a natural runner,” Carroll said. “He’s got explosive talent and we just want to get him fit in. By the end of preseason he should be just a real comfortable part of this football team.” Bevell then added, “We really like what Christine Michael is doing right now. We are going to be running back by committee.”

With coaching endorsements like that, the proverbial ball is now in Michael’s court as he has to now step up his game and run with it, so to speak. He’s got the golden ticket, the door is open and it’s up to him to perform. But for fantasy purposes right now as we sit here in pre-draft mode, it is that opportunity that becomes the difference-maker with respect to Lynch’s value as the team’s incumbent starting running back. Lynch is obviously headed towards a reduced workload which means fewer carries, fewer rushing yards and, of course, fewer touchdown opportunities. A reduced load and a committee situation do not spell first-round draft pick anymore.

But now it gets worse for Lynch as there is not only an on-field, role-related change hurting his draft value, but off-field issues are now also cropping up. Fantasy Alarm broke the story early Monday morning as sources revealed that Lynch was involved in a brawl at a San Francisco night club late Sunday evening. According to sources, Lynch, Bay Area rapper Mistah F.A.B. and FAB’s entourage rushed the backstage guard, jumped onstage and assaulted DJ Mustard who was performing as part of an after-party to a show he produced in nearby Oakland, California.

The incident was apparently a culmination of a war of words between Mustard and F.A.B,who is friends with Lynch. Last month on New York’s 105.1 FM show The Breakfast Club, Mustard talked about F.A.B.’s accusations that he [Mustard] was stealing Bay Area sounds, but that F.A.B. was saying that in the wake of having just “stole beats” himself. The trash talk apparently continued last week on Oakland radio station KMEL.

Confirmed sources stated that while Lynch was not seen throwing an actual punch, he was very much a part of the group that pushed its way through security.  Mistah F.A.B. is denying Lynch’s involvement both through TMZ who picked up the story and his own Twitter account, but our sources identified Lynch as one of the men who pushed through to the backstage area and was seen on the stage. He may not have been the one who threw the punch at DJ Mustard, that honor went to F.A.B himself, but he was most definitely involved.

But the exact level of Lynch’s involvement here is almost irrelevant. The fact of the matter is that he was there and he did have some involvement in the altercation. THAT is the issue at hand. Granted OTAs are considered voluntary but if you’re considered a leader on the team and you’re going to skip the activities, putting yourself into a situation such as this which obviously puts you in harm’s way, is just plain stupid. We can all relate to “backing up your boys” and everything that stems from that, but this was a premeditated incident (F.A.B. was very well aware of where the after-party was and that Mustard would be there) that Lynch should have had the sense to steer clear of, no matter how much he wanted to watch his buddy’s back.

Perhaps, the character issue that we see here is something the Seahawks have seen in Lynch during his tenure in Seattle and maybe that was one of the reasons that prompted them to draft Michael even though they already had Lynch and Robert Turbin under contract. Most teams, when they’re happy with their current depth at a particular position, often turn their attention to other positions. Sure, the value of Michael could have dictated the selection – we don’t want to take anything away from him – but teams don’t usually go drafting guys at a particular spot unless they’re unhappy with who they have there already.

So the bottom line -- the thing to take away from all of this -- is that Lynch’s value in the fantasy community is taking a turn for the worse. He’s 28-years old, he’s been taking his licks in the NFL for nine seasons, his workload is diminishing at the hands of a committee approach, and he apparently sees no issue with involving himself in some sort of rap war. He’s actually gone from a no-brainer top-3 overall pick to a cautionary tale you’d rather wait to grab maybe a round or two later. Given the overall decline of the running back position, Lynch seeing 15-to-20 carries instead of 25-to-30 is still better than a lot of the other running backs out there, but when the handwriting on the wall says that your team is looking to replace you, on the whole or in-part, it’s only going to get worse for you.