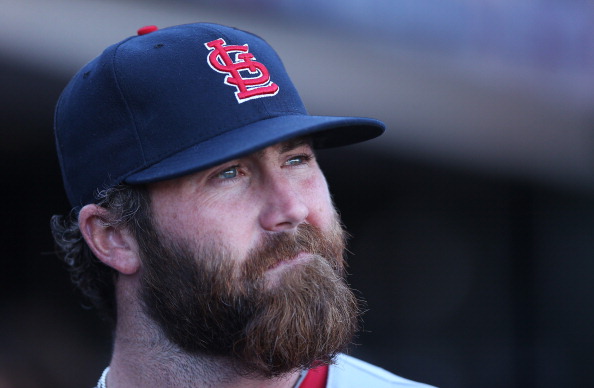 For those who opted not to invest in a top closer, citing the abundance of saves to be had on the waiver wire as your reasoning, I ask you…how’s that working out for you? While yes, in the past, there have been a number of closer jobs to change hands, leaving full-time closers available for in-season pick-up, that doesn’t seem to be the case right now. Francisco Rodriguez and Matt Lindstrom were both first week waiver-adds, but with the exception of those two, there hasn’t been a stable add for saves yet this season.

Hector Rondon might come close, but with only just a couple of weeks of service in the role, there’s still no guarantee that he stays with the job the rest of the way.  It would appear that he will, given the disgustingness that sits in the North Siders’ pen, but it’s tough to bank on it just yet. If you’re looking to add saves and the price of a closer in either the green or yellow section of the Closer Grid is too high, Rondon should probably going to be your next target.

A’s manager Bob Melvin did finally name Sean Doolittle as his closer on Tuesday, so he’s definitely worth kicking the tires on as well. Melvin did everything he could to give Jim Johnson a legitimate chance to reclaim the job, but another recent run of poor outings quickly put the kibosh on his chances. Though Doolittle is a lefty, Melvin feels most comfortable with him and the eight-straight scoreless appearances (9.1 innings) certainly provide a solid endorsement as well.

As for the rest of the lot in red, it’s just not looking too appealing for fantasy owners. There are a number of short-term solutions such as Jenrry Mejia, Chad Qualls, Joe Smith, Bryan Shaw and maybe even Zach Britton, but overall none of them seem to have the staying power worthy of a roster spot in leagues with 12 teams or fewer. The managers of the teams in question have yet to officially anoint someone and even when they do provide a slight vote of confidence, none of them have job security you can trust.

In an effort to help you in your never-ending quest for saves stability, here are a few names/situations that bear monitoring. Not all of them are certainties for save opportunities, but with the way things have been going for many teams, it’s always important to keep checking in and see when you might be able to make a move that keeps you a step or two ahead of the competition.

There’s been a world of panic emerging from Trevor Rosenthal owners as the youngster continues to hit more bumps in the roads than we’d like to see. However, it’s difficult to throw all of the blame on Rosenthal as manager Mike Matheny continues to overwork him in all the wrong ways. Take this last blow-up for example. Rosenthal was sent out for a fourth day in a row to close out a game and after throwing 23 pitches (giving him a whopping 92 on the year) ended up with his second official blown save. Matheny is an ex-catcher well aware of pitch counts and the frailty of closers. What was he thinking? Then, with Jason Motte activated from the DL on Tuesday, Matheny announces that Rosenthal isn’t available to close. Are you serious? Is Matheny trying to screw with Rosenthal’s head here? Does he want to create controversy? While Motte has looked good in his rehab work, he is not ready to be thrust into a closer’s job here. Perhaps is Matheny learned to manage his bullpen better, we wouldn’t have to deal with this nonsense. Long story longer, it’s still Rosenthal, but with Motte now active, he is a “must-add handcuff” for Rosenthal owners. Non-owners can sit tight. You’re not being savvy by picking him up at the expense of a better, more productive option.

Injuries happen, people. There’s nothing you can do. Those of us who were trying to be slick and draft Nate Jones in the later rounds, got a taste of the injury bug and now his replacement, Matt Lindstrom, is on the DL with what they are calling a subluxed peroneal tendon in his left ankle he got while attempting to field a bunt during Monday's game in Kansas City. Mitigating circumstances during that game afforded Jacob Petricka with the opportunity for the save, but he doesn’t figure to really be too much in the mix as manager Robin Ventura will turn to the likes of Ronald Belisario, Scott Downs and Daniel Webb based on in-game circumstances. In fact, it was Petricka in the seventh on Tuesday with Downs coming in for the eighth and Belisario in the ninth. Ventura is a little unpredictable when it comes to stuff like this, so give it a few games before he starts to reveal his plan moving forward. Belisario seems to be the best choice, but how many times have we seen that move botched by a manger?

As stated earlier, Joe Smith is part of that hodge-podge of unreliable closers, though the unreliable part here has more to do with the mind of Mike Scioscia than it does actual ability. Sure, Smith doesn’t have the most dominant stuff but he has been the better reliever between him and Ernesto Frieri. However, Scioscia doesn’t want to commit to Smith entirely and has decided that he’ll use both. Yes, co-closers. Totally sucks, right? The fact that it’s just the two of them makes it a little easier to predict the saves work, but watching your guy come in for the eighth is always going to sting. The interesting thing is that this could all change in a matter of moments as the Angels haven’t even needed a closer since May 14, so it’s not like we’ve seen any sort of rotation upon which to base our assumptions. Each has value right now, though I think I’d rather have Smith at this point, so don’t give up on either just yet.

This one could get downright ugly for fantasy owners as there is so much going on right now, it feels like it could turn the whole Baltimore bullpen upside down. Tommy Hunter is just one more blown save away from getting yanked from the job permanently. Original stand-by’s in Darren O’Day and Brian Matusz are now being overlooked in favor of Zach Britton who actually earned the save just the other day. Buck Showalter seems to be able to handle the use of a lefty closer as he still has Matusz to specialize in those lefty-necessary situations. But while that may be, the club may have totally screwed things up with the signing of Heath Bell. Nightmare, right? Nightmare indeed. Should Bell make it up to Charm City, he could jump into the saves mix and promptly blow it. What’s worse is that the addition of this tomato can deflates any hope in Brad Brach being a dark-horse candidate as the team now potentially has four or five different options sitting in front of him on the depth chart. I’ll still carry the torch for Brad, but it’s not looking good right now.

One last thing I’ll just mention quickly. Keep an eye on the closing hierarchy in Colorado right now. Right-handed reliever Adam Ottavino has been pitching extremely well as of late and has already jumped over Matt Belisle for potential saves work should the need go that deep into the pen. The assumption is that Rex Brothers is still being groomed as the heir-apparent to LaTroy Hawkins once he gets traded, but should Walt Weiss opt to stick with a righty instead of the dreaded lefty closer, Ottavino seems to be making some noise.

*on the DL but returning soon