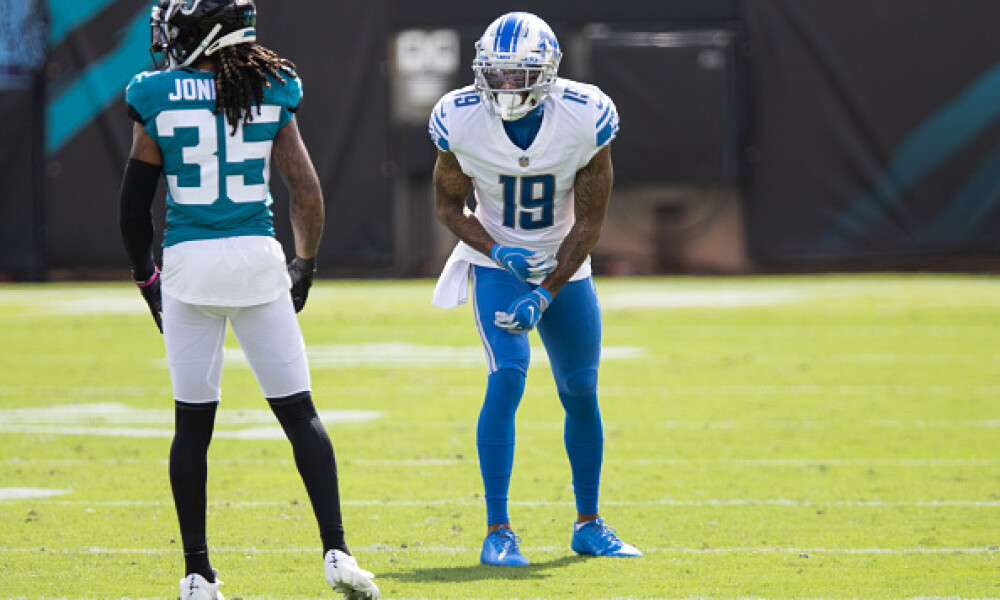 Nothing else moves the needle for fantasy football quite like a big free agent wide receiver signing.  It’s like watching a big veteran oak tree fall into a calm pond.  When it first happens, there’s the big shocking splash where Twitter freaks out a bit and then, once things settle down, we’re all left watching the ripples in the water.  Or apologizing for yelling in the grocery store because your favorite team just overpaid Nelson Agholor .

Everyone wants to talk about the splash itself and we’ll obviously touch on that but what’s more important for us serious fantasy gamers most times is actually the ripple effect.  Everyone knows Kenny Golladay is good but what happens to the little fishes in the big city pond when the 6’4”, 214 pound Kenny tree makes it’s crash landing?

Let’s take a look at the top four free agents that received the biggest contracts so far, all of which happened to land in fresh waters.

We just told you Kenny Golladay was good but we’ll tell you again - he's good.  In his last two healthy seasons he cracked the 1,000 yard mark and in the more recent one he also led the league in touchdowns with 11.  Given his size and skillset, he’ll immediately slide in as the split end with his foot tethered to the line most plays and offer a wide route tree, including his deep threat ability.  In his last healthy season, he tied Stefon Diggs for the league lead in receptions over 20 yards with 16 and no one had more YAC on those deep plays than his 140 yards.

Before the big oak in Golladay landed there, an older, elegant willow broke the waters.  I honestly don’t know much about trees but Kyle Rudolph feels like a willow or maybe a birch.  Anyway, in the post Rudolph but pre-Golladay days, way back on Thursday, it seemed that perhaps the Giants would run an offense similar to the Vikings or Ravens with Rudolph in the Dallas Goedert /Nick Boyle role and Evan Engram in the Zach Ertz /Mark Andrews role.  I mean, in 2019, Nick Boyle played 769 snaps and Mark Andrews only played 457 yet Andrews had 98 targets and 10 TDs, so that would leave a path to relevance for Evan Engram .  A great one if his usage were more like Ertz.  In that scenario you have Sterling Shepard and Darius Slayton on the outside with Evan Engram getting the vacated slot snaps of Golden Tate and they are all competing to be the top two targets on the team.  Because, as we’ve stated many times, that’s crazy important for fantasy relevance. 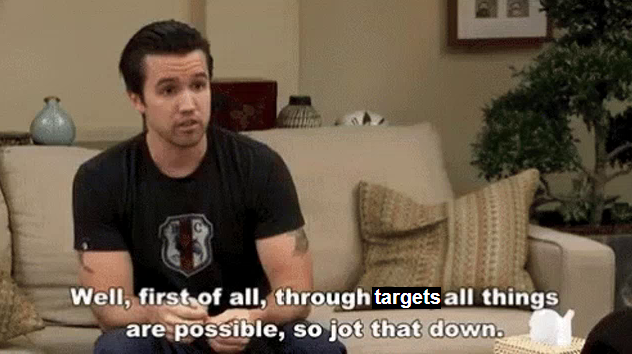 Kenny Golladay completely moves that goalpost.  Now Golladay is very likely to be the top target on the team.  The article linked last paragraph tells you why you desperately want 100+ targets and how incredibly rare it is for a team to have three players all get over 100+.  The Giants were actually the only team to do it in the 2018 season but the kicker is that it was Odell Beckham Jr., Saquon Barkley , and Sterling Shepard and Shepard only crossed the threshold when Beckham got hurt.  With Barkley back and Golladay in town, Engram, Shepard and Slayton are now all competing for a spot on the target totem pole that might not even be particularly fantasy relevant. Just at face value, I’m probably not going to be super interested in Slayton or Shepard.  Engram led the team in targets last year so, if he can lock down that slot role and be the second target on the team after Golladay, his tight end eligibility might make him a decent late flyer.  But the best thing for everyone in terms of fantasy football would be for Engram to get traded.

The Titans did not feel Davis earned himself the fifth-year option but the Jets did feel he was worth making the second highest paid free agent WR so far.  Like Golladay, he is a big bodied wide out at 6’3” 209 who can play the valuable split end role, so he’s honestly a solid piece for anyone to have even if he’s not the flashiest.  Given the money, he’ll be a staple opposite Chris Herndon with his foot tethered to the line as that split end.  Hopefully not like this.

Know who else is a nearly identically framed big bodied WR at 6’3” 207?  Denzel Mims. This move, at the very least, pushes Mims over to flanker since the veteran Jamison Crowder is a staple in the slot.  The Jets could save $10 million cutting Crowder, but they haven’t done it yet and, if they are going to pay him that kind of money, expect him to get a lot of work.  What that likely means is that Denzel Mims ends up as the third target on the team with an uphill battle for fantasy relevance in the immediate future.  And for Chris Herndon,  after suffering under Adam Gase who asked him to block on one of every four pass plays, Herndon is once again put into a tough spot and loses a lot of upside appeal.  If they draft a WR in the second round then pay two others over $10 mil a year, I have a hard time placing my money on the clunky tight end but you never know.  As I’m sure you could have surmised from the first paragraph, when the big log lands in the pond it’s not usually great for whatever is currently in that pond. Except for maybe in this next instance.

First off I just want to say I’m already sick of typing “Washington Football Team”. Jets. Giants. Rams. C’mon guys. They will be WFT from here on out.

Anyway, Samuel is about as dynamic a wide receiver as you can find.  Forget the fact that he operated out of the slot for 71.8% of his snaps, but still was able to catch five passes over 20 yards (which is only one less than DJ Moore’s team leading six).  This guy had 41 CARRIES for 200 yards and two touchdowns.  That’s more rushing yards than Kerryon Johnson had (sorry DonkeyTeeth).  Essentially what happened here is that Panthers coach Matt Rhule did the whole “new coach brings in HIS guys thing” in the form of Robby Anderson (who he coached at Temple).  That made Samuel expendable, one of the rare times a good WR actually hits the market.  And, just like Robby Anderson going to play with his old coach, Samuel now gets to go play with HIS former Panthers coach Ron Rivera.

As I hinted above, this one actually isn’t likely to hurt ALL the incumbent players.  Namely, Terry McLaurin is pretty locked into one of the two outside roles and Curtis Samuel is more of a flanker/slot/gadget player.  In fact, as we’ve seen with guys like Mike Evans and Chris Godwin , Adam Thielen and Justin Jefferson, Antonio Brown and JuJu Smith-Schuster , Demaryius Thomas and Emmanuel Sanders etc., two good wide outs with highly concentrated snap shares and target shares can thrive alongside one another.  So the move might actually improve McLaurin’s value.

However, those targets need to come from somewhere due to the Law of the Conservation of Targets (a phrase that I believe was coined by RotoUnderworld’s Matt Kelley).  And in all likelihood they will come from tight end Logan Thomas and satellite back J.D. McKissic , who both managed to have over 100 targets in 2020.  Logan Thomas ran 404 of his league leading 610 tight end routes from the slot, so the introduction of a new slot guy will potentially push him in-line for more snaps.  And it gets even worse the farther down the totem pole you go.  If you were holding out hope on Kelvin Harmon or Antonio Gandy-Golden, you now have to bet that one of them not only gets more targets than Logan Thomas , but also one of Samuel or McLaurin to truly be fantasy relevant.  That’s a tough bet.

My Patriots fandom and homerism aside, Nelson Agholor isn’t a terrible player and this isn’t a terrible landing spot for him for fantasy.  That doesn’t mean that I didn’t drop my phone in shock when I saw the size of the contract the way he dropped nine passes last year.

But the truth is, the Patriots needed wide receivers.  And Agolor did have 896 yards and eight touchdowns on only 82 targets last year, so he actually did offer quite a bit of bang for your buck on the Raiders.  He’s not huge at 6’0” just under 200 pounds, so he profiles as more of a field stretching flanker than a split end.  Agholor realistically becomes the best WR on the team from day one.

The big loser here is likely N’Keal Harry.  We’ll get in depth on the Jonnu Smith and Hunter Henry dual tight end bonanza signings in our tight end article, but the brass tacks is that you need to have seven guys tethered to line on every play which would normally be good for a 6’4” 225 pound split end like Harry.  Except when you have the option of having two tight ends tethered to the line - which the Patriots now have.  We mentioned the Eagles doing this, but an even more prominent example would be the Colts two tight end sets with guys like Colby Fleener, Dwayne Allen , Jack Doyle etc.  They did that so that the 5’10” 183 pound TY Hillton could line up at flanker and get a free release off the line.  The Pats no longer need a split end on every play, so since they are paying Nelson Agholor and two tight ends a gazillion dollars, that only leaves room for one more wide receiver on the field on most snaps.  There are rumors that Julian Edelman might not be ready to go (or even play at all) but if he's playing they obviously love him there.  Jakobi Meyers managed to double Harry’s yardage total last year, despite being an undrafted free agent, so he might already be ahead on the pecking order.  And on top of all that - none of those guys might even matter.  Because they also signed Kendrick Bourne to a 3 year $15 million contract and he may be the second best WR there day one.  All the guaranteed money for him is in the first year so he'll definitely be there for 2021 at the very least.  We've seen first round picks like DeMaryius Thomas struggle early (45% catch rate in his second year) and then turn it on big time in year three, but it's definitely put up or shut up time for N'Keal Harry.