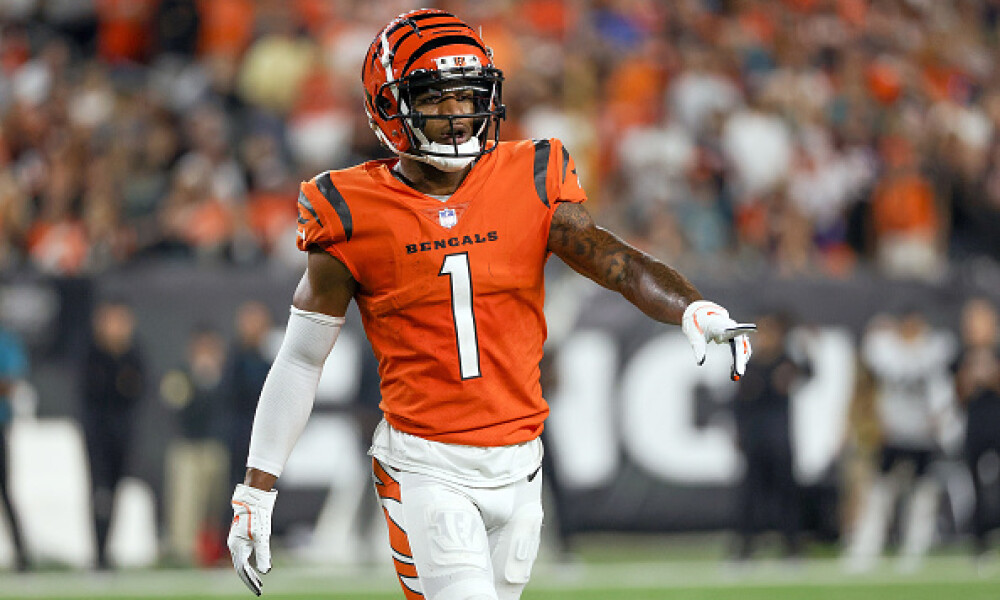 Unlike the matchup last week with the Raiders, the Bengals find themselves facing a team they’ve yet to matchup with so far this season.  A team that, despite being the AFC’s top seed and coming off the bye week, actually has only the third best odds out of four teams of winning the AFC. They’ll likely be playing with a chip on their shoulder given that slight disrespect but the reality of their fate is likely going to boil down to the health of one player: Derrick Henry. He’s practicing this week with plans to play but it’s yet to be seen whether he’ll be able to play at the game changing caliber we’ve come to expect.  The Titans are one of the best teams at running the football (first in rush attempts, top five in yards per game) while the Bengals have been solid against the run (seventh fewest yards per game allowed).  That’s likely to be the difference maker here.

There is a pretty glaring weakness in the Titans defense and that’s their secondary.  Safety Kevin Byard is a star of course but they don’t have a single active cornerback on the roster that grades out in the top 50 per Pro Football Focus.  They are a bottom five team statistically vs the WR which should bode well for all three of the Bengals wideouts but Ja’Marr Chase has been the clear focal point and the Titans don’t really have the tools to stop him.  In DFS, feel free to use Tee Higgins or Tyler Boyd if the cheaper price makes your team work (especially with Tennessee’s DVOA v.s the third and fourth WR) but, if you can get Chase in there, he’s clearly the chalk right now.

We just can’t do it. There are two very high risk high reward plays here. And those would be Derrick Henry and D’Onta Foreman.  If Henry is King Henry, he’s a super-mega-stud. If he’s not, D’Onta Foreman is a sneaky upside play.  But we already mentioned that the Bengals are good against the run and then we are going to get into coin flip territory on top of that? Not worth it.  The Bengals basically have one star corner in Chidobe Awuzie and then it’s pretty flat after that which is why they have the 6th best DVOA vs. the top WR but are a bottom five team vs. the second.  Julio Jones is finally healthy and playing well out there and with Azuzie likely covering AJ Brown, he feels like a pretty solid play this week - especially given his price in DFS.

These teams are fairly different in terms of offensive personnel.  The Packers rely on heavily concentrated star power - namely, the back to back league MVP in Aaron Rodgers and his top weapon Davante Adams who literally has a hundred more targets than the next closest player on the team.  The 49ers on the other hand have a modest QB, an arsenal of unselfish weapons in Deebo Samuel, George Kittle, Brandon Aiyuk, and even Jauan Jennings, as well as a backfield that has produced regardless of who needs to carry the torch.  It’s a bit of a David vs. Goliath matchup with the Packers favored coming off the bye at home but, as with any of these games at this time of year, anyone can win.

Everyone and their uncle is going to be on Deebo Samuel.  That is pretty obvious.  And it’s almost a must-play in leagues where you can start whoever you want - his usage right now in terms of both getting high leverage carries AND running real, high aDot routes is incredibly unique and valuable.  But Elijah Mitchell is still the real workhorse back running behind arguably the best left tackle in the league in Trent Williams.  He’s coming off a game with 27 carries and the Packers are one of the worst teams vs. the run at 4.7 yards per carry.  If the 49ers are going to win this game, they are going to need to establish Mitchell early.

When possible, we like to go with the a contrarian play or a matchup that we think will generate some value for us.  But, with this Packers, team, there is really only one guy the offense runs through: Davante Adams.  Not only does he have an absurd target share but San Francisco is the second worst team in the league vs. opposing top WRs.  Emmanuel Mosley is out indefinitely with a high ankle sprain and all of Dontae Johnson, Josh Norman, and rookie Ambry Thomas have been fairly beatable. This should be another game where Davante Adams feasts.

Here’s a juicy matchup and storyline for you.  The Buccaneers and Tom Brady get to host this game coming off their trouncing of the Eagles, also at home.  But, the last two times these teams have played, the Rams have gotten the better of the Bucs which included a win in Tampa Bay in 2020.  When they played in September this year, the Rams not only won 34-24 but they did so without Cam Akers or Darrell Henderson (largely on a four touchdown pass performance by Matthew Stafford).  The line for this game reflects how close it is as it’s a three point spread which is usually what the home team is awarded.

This one actually ends up being pretty simple for us.  The Rams have been fairly problematic for quarterbacks with a top three defense vs. the QB so we aren’t going Stafford.  We don’t typically like Tyler Higbee but it’s not a good matchup for him anyway.  At running back the Bucs are letting up the third fewest yards per game plus you have the concern of a split between Cam Akers and Sony Michel anyway.  So that leaves us with wide receiver.  They use an incredibly highly concentrated snap share among their top three wide receivers so the decision you have to make is whether you want to start the chalk with Cooper Kupp, go contrarian with Odell Beckham Jr., or go double contrarian with Van Jefferson.  When you look at DVOA, the Bucs don’t really offer an advantage when pivoting to ancillary pass catchers so Kupp is the obvious answer here is you can get away with it.

We mentioned there is a home field advantage for the Bucs. Well, it’s been especially prolific for quarterback Tom Brady who has 25 touchdowns to only four interceptions in his nine games at Raymond James Stadium (compared 18 touchdowns and eight interceptions in his nine games on the road).  Brady has been a beast on the natural grass of Tampa Bay and, considering the fast pace that both teams like to play at, he should have ample opportunity to let it fly this week.  You need to start a quarterback somewhere and Brady is the one we like this week.

This is the big one folks. Hence why it’s the night game. In terms of betting action, it’s got all the hallmarks of an NFL electrical fire.  We’ve got the number three offense in points per game facing the number four offense in points per game.  It’s got the highest over under of any game by six points.  Yet it also has the closest spread of any game at 1.5 points. If you are reading this then you at least have an idea of what’s going on with NFL football so we shouldn’t need to explain why a Bills at Chiefs playoff rematch is the kind of game we dream about.  If you really have no idea though - just make sure you tune in for this one on Sunday evening.

The vast majority of lineups are going to require you to have three running backs. We’ve only mentioned one so far in Elijah Mitchell.  Obviously with the Bills you can start pretty much anyone - all of Josh Allen, Stefon Diggs, and Dawson Knox will be popular while the ancillary wide receivers are viable contrarian plays.  But I don’t think folks have fully grasped the fact that Devin Singletary has completely taken over this backfield.  There was a huge stretch where Zack Moss outsnapped Devin Singletary for five games in a row in week 3 (44 to 34), week 4 (42 to 35), week 5 (42 to 15!), week 6 (42 to 35), and week 8 (47 to 25).  Since week 10 however, Singletary has outsnapped Moss in every game including taking 80%, 76%, and 86% of the snaps the last three games.  Singletary is dialed in and while folks are going to be focusing on the pass game, we’ll be jumping through the table on them with the rush attack.

We’ve given you a QB, two RBs, three WRs, and a flex so why not round out a lineup here with probably the easiest call in Travis Kelce?  The Bills are good vs. the tight end but the reality is that they’ve been even better vs. wide receivers.  And, with Jerrick McKinnon coming out of nowhere to have a big game, it’s difficult to play the “Chiefs backfield guessing game”.  The Bills use Matt Milano in man situations vs. the tight end with safeties like Jordan Poyer over the top but the reality is that the 6 foot Milano is best used against prototypical in-line tight ends.  Travis Kelce is anything but that as a 6’5” monster that has actually played over 60% of his snaps this season at wide receiver. Despite being the known focal point of the offense and, therefore, the focal point of the defense, Kelce now has five touchdowns in his last four games, all of which amounted to must-win situations vs. the Chargers, Bengals, Broncos, and Steelers.