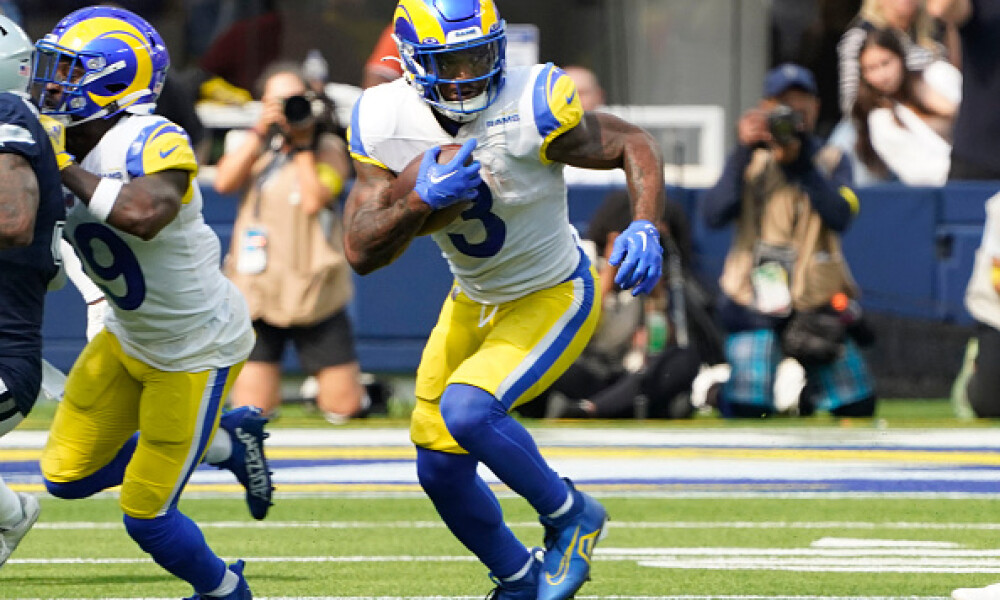 Fantasy football is great until real football comes along and ruins it. And it looks like that’s already begun as word out of Rams camp is that Cam Akers has torn his achilles. It’s a real shame as Akers played behind a brutal offensive line in college, fought for a starting gig in the NFL, and we were finally hoping to see the big breakout year this year. But the show must go on for fantasy football analysts so let’s take a look at the fallout.

Here’s how everything broke down last year in terms of snaps and touches last season. Unlike some organizations three players got essentially all of the work in the backfield for the Rams: Cam Akers, Darrell Henderson, and Malcolm Brown.

This might seemingly paint a picture of an even distribution but in reality that wasn’t the case. Cam Akers as a rookie needed to earn his spot but once he did he essentially ran away with the starting role. From week 9 on, Akers had 89 carries, Henderson had 40, and Brown had 23 so Akers had more carries than the other two combined.

Malcolm Brown had already moved on to the Miami Dolphins and Akers is now out. Here’s what that leaves.

Darrell Henderson - When drafting him, Rams GM Les Snead had touted the back out of Memphis as giving them an Alvin Kamara element.  At 5’8” 208 he’s not quite as big as Alvin Kamara or an ideal size for an every down back but he does bring 4.49 speed and pass catching chops to the table (since joining the team he’s averaged almost 10 yards per reception and in 2020 he didn't’ drop a pass while drastically improving his pass blocking). He should immediately move to the top of the depth chart.

Xavier Jones - Jones joined the team as an undrafted free agent after five productive years at SMU (especially his 5th year where he had 1,276 yards and 23(!) touchdowns running the ball. At 5’11”, 208 he doesn’t offer much more in terms of BMI to Henderson and only contributed on special teams with the Rams last year. Given their similar skillset, Jones would make more of a backup to Henderson than a complement.

Raymond Calais - Calais out of Louisiana Lafayette actually profiles as even more of a “scat back” than Henderson or Jones believe it or not. At 5’8” 177 he doesn’t have the size to carry the load up the middle but with blazing 4.42 speed (95th percentile per PlayerProfiler) he could make for an interesting third down back and a deep dart in full PPR best ball.

Jake Funk - This year’s seventh round pick was not particularly productive at Maryland from an overall standpoint but that may be a bit misleading as the battled injuries early in his career and then they ended up canceling the season after only five games his senior year.  In those five games though he did average over 100 yards rushing a game and he had an 8.6 yards per carry which are actually both higher than Xavier Jones in his monster super senior year in 2019.   At 5’10” 204 he, like the other guys in this group, does not have the size or athleticism to attempt to replace the 5’10” 216 pound Akers or 5’11” 225 pound Malcolm Brown.  If they do roll with this group without bringing someone in though, it almost has to be either Funk or Jones that helps Henderson out on the ground.

Here is an interesting thread on Jake Funk from Kevin Grenson of Football Absurdity/BeerSheets.

Otis Anderson - The most undersized of the group would be the 5’10”, 172 pound Otis Anderson - an undrafted free agent out of Central Florida. With only 4.7 speed and limited size I’m not sure what the appeal would be for fantasy football but the Rams felt he was worth signing to a UDFA contract for at least a look so it’s a name to know.

Le’Veon Bell - There is an interesting dichotomy in the fantasy world with “bad character” players. On the one hand it can be difficult to trust their work ethic or longevity. And teams can have a short lease with them if they aren’t putting in the work. On the other hand, the upside can be tantalizing. As we saw with guys like Tyreek Hill, Brandon Marshall, Antonio Brown etc., teams may pass on them because they don’t want that toxicity around but the talent and results are often times undeniable. Le’Veon has been one of the most outspoken and visible players in the league (and rarely in a good way) but he’s also been one of the most productive. Despite things ending poorly (which included Bell saying he’d never play for Andy Reid again), Bell did manage 4 yards a carry, a couple touchdowns, and a few receptions despite joining the team mid season and not knowing the playbook at all. If the Rams were to sign him he would immediately become interesting for fantasy football.

Todd Gurley - There is likely too much bad blood/history there for Gurley to go back to the Rams after they released him rather than paying him the contract they agreed to. But maybe they decide that was “just business” and mend that bridge. The situation with Gurley is pretty clear at this point - he can still manage flashes of his former self but his knee issues require that his touches be managed, making him less appealing for fantasy.

Alfred Morris - It’s not a sexy name by any means at this point but the 5’10’ 220 pound Morris does offer the one thing the Rams lack: power. Morris’s knock has always been his pass catching but the Rams seem to have plenty of third down back on the depth chart whereas they need help at the goal line.

Adrian Peterson - Another player that isn’t great in the pass game but offers power in up the gut and in short yardage situations. Given his personal financial situation he’s typically more than willing to offer his services to those who will take it.

DeAndre Washington - Not a flashy name by any means but he’s been serviceable and reliable as a backup for the Raiders, Chiefs, and Dolphins in his career. Would not be a surprising name to hear called but would also not be super excited for fantasy.

Other names that could be in contention but are likely redundant assets to what the Rams already have: Duke Johnson, Dion Lewis, Chris Thompson, TJ Yeldon.

Trades are difficult to predict - especially since a lot of the teams with loaded backfields are not going to be readily willing to help a competitor. Because of that I don’t see teams like the Tampa Bay Buccaneers sharing their wealth of RBs but maybe for the right price it could make sense. We won’t go too deep into it because of how incredibly difficult it is to pinpoint a specific trade but here are some options that make sense.

Houston Texans - The Texans are not competing this year - Vegas gives them the lowest odds of any team to win the Super Bowl and the lowest over/under win total.  Yet they have quietly collected a stable of backs that could essentially ALL offer the short yardage help the Rams need: David Johnson, Mark Ingram, Phillip Lindsay, even Rex Burkhead. It would make a lot of sense for the Rams to send the Texans a pick for a running back. It helps the Rams now and give the Texans ammo for the rebuild

New England Patriots - The Rams need power backs? Any of Damien Harris, Sony Michel, or Rhamondre Stevenson would immediately be the biggest back on the Rams depth chart. The Patriots have James White for passing downs and Cam Newton who is practically a running back himself. Sony Michel is on the last year of his deal and they didn’t pick up his 5th year option so they’d get something for a guy they are losing anyway.

Denver Broncos - Speaking of guys who are on their way out - Melvin Gordon. The Broncos drafted Javonte Williams while also signing pass catching back Mike Boone so the writing is pretty much on the wall for Gordon. At the right price, why not start the Williams era now and get yourself something in return for the aging veteran? Like the Texans and Patriots, you are at least sending them to the NFC where you wouldn’t need to deal with them until a hypothetical Super Bowl.