Ivar Anderson takes a look at the top players with multi-position eligibility this season. 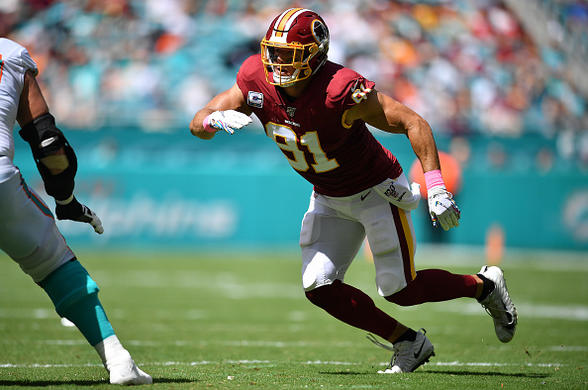 Assuming (always a dangerous activity, it should be admitted) that you are participating in a league that employs roster spots for individual defensive players, you have probably arrived here looking for an advantage or three in drafting and maintaining your roster. The differences in various league formats have been discussed here previously in the IDP Reports already published this spring (tackle-oriented, big-play and hybrid, to refresh your memory) as well as how the various positions-LB/DL/DB-fit into those schemes. But what if there were some way to get the benefits from one position while slotting a particular player in at different role on your gameday roster? Enter multi-position eligibility.

If you play fantasy baseball, you will be familiar with the concept of the player that is able to be inserted at various different offensive positions to replace an injured starter, or fill in for a player getting a day of rest. In football, lineup decisions are not made day-to-day, of course, but rather on a week-by-week basis, so dual eligibility for an IDP does not translate into quick replacement strategies when setting lineups. Instead, finding a linebacker that has defensive line eligibility transforms a lesser-producing IDP into a player that potentially can provide greater point production, since linebackers generally provide a stronger base for fantasy value than a linesman. Or if a defensive end has dual defensive tackle entitlement, the opportunity to rack up extra points arises.

In 2020, the dual eligibility option only exists on the Yahoo! fantasy football platform, unfortunately. ESPN has specifically decided to utilize the primary position determination route, relying on the position designated by the NFL when setting up their defensive player rolls. Of course, there is always the possibility of in-season adjustments to positional designations occurring, so it behooves the savvy fantasy football owner to keep perusing the free agent market when restocking the roster, replacing underperforming or injured players on your team.

For the first installment, let’s take a look at some players that qualify at both linebacker and defensive end. Projections for the 2020 season are set forth as follows:  Total Tackles/Solo Tackles/Sacks/Forced Fumbles/Fumble Recoveries/Pass Deflections

Fowler is coming off a superb 2019 with the Rams, racking up 59 total tackles (TT) with 40 of those of the solo variety. He also collected 11.5 sacks and deflected six passes (PD) as a member of the Los Angeles defense, after being traded there part way through 2018. His move to Atlanta guarantees him a top role as a full-time edge rusher for the Falcons, and slotting the linebacker in as a DL will reap huge benefits for his owners.

Sweat is the first of two Washington defensive studs that possess that magical dual eligibility this article promotes for IDP fantasy owners to seek out. Of course, the team did draft a superb defensive presence in the first round of this year’s draft in Ohio State standout defensive end Chase Young. Sweat will be splitting time at LDE with the next player profiled just a few lines below, Ryan Kerrigan , which will depress his stat line to a degree. The defense is shifting to a 4-3 scheme under new coordinator Jack Del Rio, which will play to Sweat’s strengths and return him to the scheme he excelled in during his collegiate career at Mississippi State.

The left-side partner to Sweat, Kerrigan will likely put up numbers similar, if not a bit better, than the player he will split time at LDE with this season. Chase Young will be given every opportunity to slot in at the RDE position from the start of the season, so Kerrigan and Sweat will see their fantasy value depressed to an extent due to circumstances. Kerrigan is in his final year of a five-year deal, and the team will want to extract as much value from him as possible, which could mean additional snaps to be his as a strongside LB.

Quinn departs from Dallas, signing a five-year contract with the Bears. He will be paired with Khalil Mack at outside LB to form a prolific edge rush duo for Chicago. The Bears let Leonard Floyd go who, signed with the Rams as a replacement at outside LB for the first profiled player in this article, Mr. Fowler, who as noted above is now in Atlanta. The 30-year old is coming off a season in Dallas where he gathered in 11.5 sacks and 22 QB hits (QBH), so it is understandable why the Bears brought him aboard.

The 27-year old strongside LB joins Jacksonville, where he is expected to see every down snaps for the Jags in the coming campaign. He is a tier below the players profiled above, as indicated by his projected stat line below, but to harp on a theme, if he can be employed as a DL while playing and accumulating LB-type stats, he becomes a sneaky late round selection in drafts. He only signed a one-year deal with the Jaguars, so he will be looking to show his mettle this season.

Next week, the focus will shift to those IDPs that qualify at both the DT and DE position on the Yahoo! fantasy football platform. Come back for some more multifaceted defensive player profiling, while the NFL figures out just how the 2020 season will arise in these confusing times.