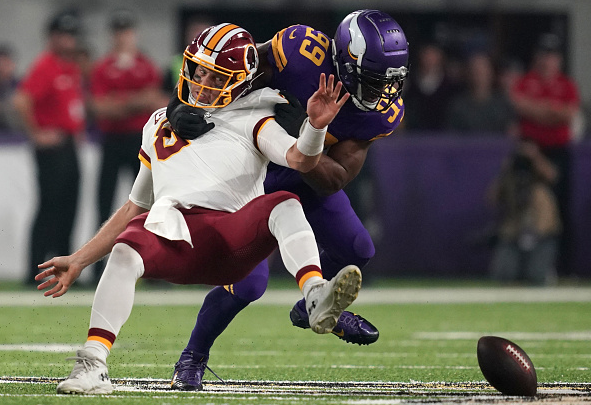 If you are still searching for IDP to pick up for your roster, congratulations on surviving the initial period of the fantasy playoffs. Below are a number of potential defensive players to pick up to fill in for an underperforming IDP or one that has landed on the injury list below. Good luck on your quest for a league championship!

Roquan Smith has landed on the IR, and Pierre-Smith will move from backup to starter. He had five total tackles (TT) last week with one of those for a loss of yards (TFL). Add in a QB hit/hurry (QH) and a pair of pass deflections (PD) and you have an IDP worthy of LB2 status going forward.

Robertson became an every down LB in Week 14, collecting eight TT (five solo, one TFL) with an INT and a PD to boost his big play value. With both Kiko Alonso and A.J. Klein both questionable for this week’s contest against the visiting Colts, he could again start in a game with great matchup potential, as Indy ranks third among teams in terms of allowing fantasy points to opposing LBs.

Ebukam has joined in the strong pass rush corps in LA, picking up 3.5 sacks over the past three games. Against the visiting Seahawks, he had two sacks, a pair of QH and five TT (four solo, two TFL).

Biegel has been seeing an uptick in playing time (PT), on the field for 80% of the defensive snaps in Week 14, where he collected nine TT (six solo). He now has the Giants on tap, the team allowing the second most fantasy points to opposing LBs.

Tavai saw an increase in PT in Week 14, and starting MLB Jarrad Davis is questionable for Week 15’s tilt against the Bucs, which could mean another opportunity to shine on defense. He is coming off a 10 TT effort in Week 14 (four solo) and to continue a theme, he has a great matchup as Tampa Bay ranks fourth overall in allowing opposing LBs fantasy production.

It seems difficult to believe that this is the first mention of Hunter in the IDP Report this season, but he finally deserves a profile here. Note, though, that he is more heavily owned that most of the other DLs that have graced this article (37% in Yahoo, 50% in ESPN leagues). He has 12.5 sacks on the season, after collecting 3 against the visiting Lions in Week 14. In that game, he also grabbed seven TT (six solo, three TFL) with a trio of QH as well. He has a so-so matchup against the Chargers this coming Sunday, but his production has been picking up since the bye week in Week 12.

The Browns’ nose tackle led the defense with nine TT (four solo) and also was credited with half a sack and three QH against the Bengals. Unfortunately, the Week 15 opponent is not as great a matchup with the team heading to the desert to take on the Cardinals, so temper your expectations of a repeat dominant performance, but in a DT-mandatory league, he is a worthwhile consideration.

Thompson has stepped in for the injured Jeff Heath , who is still questionable this week, and has amassed 16 TT (nine solo) over the past three weeks with 1.5 sacks and a pair of PDs.

The rookie continues to see significant PT in the Brown defensive backfield, racking up eight TT (six solo) against the Bengals in Week 14. This week, he takes on the Cardinals, a lower tier matchup, but so long as he is on the field, he has a chance to produce IDP value for is owners.

Amos has been providing some big play production lately, not his usual forte, but Week 15 is a good matchup with the Bears coming to visit. His stat line for Week 14 looked quite full and tasty: seven TT (six solo, one TFL) a sack, a QH, and INT and two PD. The potential is there again, but even if the big play production falters, he has been a relatively steady source of tackle production.

Diggs has landed in Seattle after leaving Detroit in a trade, and is settling in as a solid DB option for fantasy purposes. He had five TT (four solo) with couple of INT and PD each against the host Rams, and scored a TD. No point in expecting more six pointers, but look for him to continue to create turnovers on defense and toss in some tackle numbers weekly.

The Bronco starting strong safety is coming off a double-digit tackle effort in Week 14: 11 TT, six solo. He also picked off a pass and had three PDs. He heads to KC this week to face Pat Mahomes, and while that is not the ideal matchup, it is a division rivalry game, so there is that factor to consider.

Smith should see another start with Adoree’ Jackson questionable for Week 15 against the Texans. He is fresh off an eight TT effort (five solo) performance last week in Oakland, where he also forced a fumble (FF). The next two weeks should provide plenty of aerial action for the corner to take on.

The edge rusher is not lacking for PT, but has collected just half a sack in the last nine games he has played, and that was back in Week 7. Coupled with an inconsistent tackle effort week to week, he is not worth a roster slot.

The 37-year old veteran may be finally chugging into the station on his last bit of fuel. Over the past three games, he has collected a paltry three solo tackles and one fumble recovery (FR). Feel free to cut him loose without concern.

Hitchens is giving his fantasy owners limited tackle numbers for the most part over his last six games, at least in terms of solos, and no big play production at all. Unless you are looking for total tackles and/or assists, he is not worth starting.

Since returning to the field from his broken jaw, he has produced just a pair of sacks and only 11 TT over those five contests. Not exactly starting LB stats, especially with the playoffs going on now.

When he returned to action, there was hope that he would return to his former productive self. He does have 3.5 sacks but only 18 TT over his seven games this season. Unless you absolutely can get by with potential sack production from your DE, he is not the DL to trust in the playoffs.

It was looking promising for Ferrell, with 2.5 sacks in Week 10 versus the Chargers. Unfortunately for those who added him based on this writer’s promotion of him as a wire pickup, his value has severely diminished with just eight TT and one PD over the past four games he has played. Drop him now if you have not acted on that impulse already.

None to speak of except for those listed below in the Injury Report.

Remember, the first team listed is the one to use your IDPs against. Do not go crazy, and play a LB5 against the Giants, but certainly you will do well if you own a top LB on the Seahawks or Dolphins, or a DL on the Texans that you can plug in this week, for the most part.