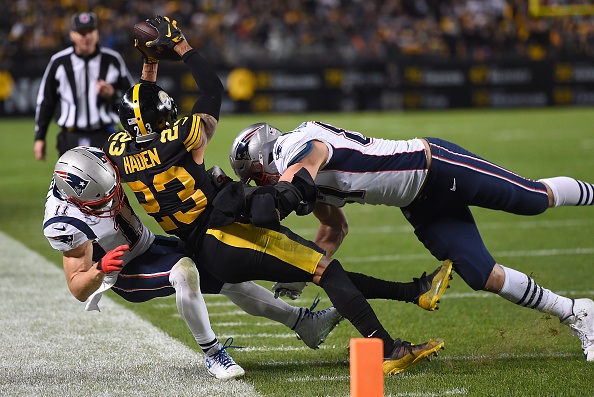 Hope you all survived the six-team byes that Week 10 brought us. Back to a fairly normal  situation of four teams not playing this current week, and below there is a fine selection of IDP available on the waiver wire to pick up and replace your injured and/or underperforming players on defense, especially in the DB realm.

With Danny Trevathan on the sidelines, the Bears will turn to four year veteran to fill in. He collected 10 tackles (eight solo) in Week 10 against the visiting Lions, one for a loss of yards (TFL). He also contributed with an INT, a pass deflection (PD) and a QB hit/hurry (QH), as well as a sack. Quite a full stat line for a former special teams player that should be available to pick up off the wire.

Matthews finally came back from his jaw injury that kept his out of action since Week 5, and resumed his sack-happy ways, collecting 1.5 against the host Steelers. That gives him 7.5 sacks on the season, even with him missing three games. He is not much for tackle production (three TT, two solo, one TFL) but is extremely valuable in leagues that reward for sacks. He also added a PD and a pair of QH against Pittsburgh.

Barron, on the other side of the field, put up double-digit tackles in Week 10 (10 TT, all solos). He also tossed in a PD to spice up his stat sheet, and he has a great matchup with the Steelers heading to Cleveland to take on the fifth most generous team in terms of LB fantasy production.

Oakland has been a surprise team this season, and production from rookie DLs such as Farrell (and his teammate Maxx Crosby) has been a big reason for their success. Ferrell picked up eight TT in Week 10 (eight solo, two TFL), to go with a trio of QH, a PD and 2.5 sacks. Farrell is an upside DL that should be kept in mind if you need a replacement IDP.

Flowers saw a big uptick in snaps played in Week 10, and responded with a corresponding increase in production: seven TT (six solo, two TFL), two QH and a sack. So long as he is seeing time on the field, he is a steady producer on defense.

Murphy has a couple of good matchups on tap, with the Bills heading to Miami and then hosting the Broncos. He is coming off a seven TT effort (six solo, one TFL) and similar production can be expected over the near future.

Be aware that Lawrence has been limited in practice with a neck issue to open the week. He was credited with eight TT last week (five solo, one TFL) despite playing just 2/3 of the snaps on defense, while also picking up a QH against the visiting Vikings.

Jones added to his sack total, picking up two more against the host Titans, giving him five on the season. He had seven TT in Week 10 (four solo, one TFL) as well as a pair of QH and forcing a fumble (FF). He is an elite DT option to plug in if you play in a DT-mandatory league.

The situation in Cincy is dire, but Bates has been a shining star. In his second NFL season, he continues to rack up the tackles, collecting eight more against the visiting Ravens (seven solo). He contributed big play fantasy value, too, with and INT and PD.

Randall came off a hamstring injury to play every down on defense, putting up seven TT (five solo) and a PD. He has been a plus DB when healthy, but his absences from the field make him difficult to trust fully.

Adams was stellar for the Jets in Week 10’s matchup against the Giants: Nine TT (eight solo), two sacks, two QH, two FF, one fumble recovery (FR), one PD. He also contributed a TD, but obviously that is just sauce for the goose, and not something you can expect from any IDP on a weekly basis. Do not operate on recency-bias, as his next two matchups are not as favorable for a safety, with Washington and Oakland on the schedule.

Tracy Walker does not look good to play in Week 11, meaning the Lions will again turn to Wilson to be an every-down DB. He collected six TT (five solo) against the host Bears last week, and also added a PD and a sack to make him a big-play option as well. With Walker looking doubtful for Week 11, expect similar production against the Cowboys at home.

Peters has three defensive TDs on the season, and in the three games he has been with Baltimore, he has collected two pick-sixes. He has big play potential, obviously, with the INT and a PD against the Bengals, but also added six TT (five solo), making him an all-around valuable DB option in IDP leagues.

White has been assigned the duty of shadowing the opposing top WR, and picked up four PD while covering Odell Beckham Jr. in Week 10. He also collected six solo tackles last week, and is on schedule for more than 60 solos this season if he keeps up his current pace of production.

Rookie CBs that are targeted frequently by opposing offensive coordinators put up excellent fantasy numbers generally, and Dean has been in that class. With Vernon Hargreaves III being waived by the team, Dean will continue to see snaps on defense. He picked up four PD and an INT in Week 10, but only two solo tackles (one TFL), although he did have six TT the previous week.

As with the prior CB discussed this week, Hughes is an unproven youngster who will be targeted until he proves himself. He had seven solo tackles against the host Cowboys, with a pair of PD, but be advised his team will not be active in Week 12 due to their bye.

If Haden plays in Week 11, which is questionable at this point, he has a great matchup against the Browns. He is coming off a seven TT effort in Week 10 (six solos) with five PD and an INT, as well a FF, so if he goes, he is a tempting option.

Jones has collected just nine TT over the past two games, while teammate Foyesade Oluokun collected eight tackles in less than half as many defensive snaps in Week 10. Jones is a three-down LB but his production is not reflecting that playing time.

Walker is seeing plenty of time on the field in the Colt defense, but his fantasy production has been inconsistent at best. He has big games, then lays an egg, and that is not what you want at this stage of the season.

Garrett has been held off the stat sheet in terms of sacks the past two games, although he does have 10 sacks on the season. His major failing is the limited tackle production he provides as a DL with just 28 through nine contests. His Week 11 opponent, the Steelers, is also not a great matchup.

The Dolphin DE was an IDP darling earlier this season, but has gone ice cold of late, with just two solo tackles over the past three contests. It is time to cut him with that type of limited production.

None to write about, save for those listed in the Injury Report below

Remember, the first team listed is the one to use your IDPs against. Do not go crazy, and play a LB5 in the Falcon-Panther game, but certainly you will do well if you own a top LB or DL on the Saints that you can plug in this week, for the most part.