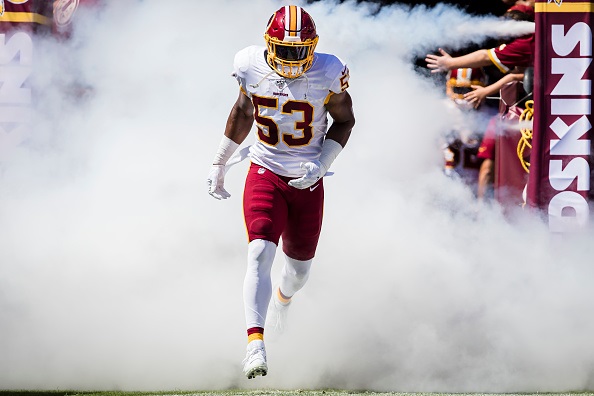 We are coming up on the six-team bye extravaganza foisted on the fantasy owners of the world by the NFL, with a typical four-team bye week on tap in Week 9. Time to scramble to the wire and fill those empty IDP slots, and fortunately, there are plenty of LB and DL options to consider. Things are considerably scarcer in the DB realm, sorry to report.

Pierre-Paul is no stranger to making big time returns from injury (remember that horrific fireworks accident back in 2015? Hope not, actually), and now steps back in from a neck injury to make an immediate impact in Tampa Bay. He collected three solo tackles, all three for a loss of yards (TFL), to go with a sack and a QB hit/hurry (QH). His ownership percentage is low in both ESPN and Yahoo leagues at this point, and he is a dual-eligibility IDP who also can be slotted in at DL in both those platforms.

Milano racked up 13 total tackles (TT) in Week 8’s matchup against the visiting Eagles, three of those being for a loss of yardage. He is playing as an every-down LB in the Buffalo defensive scheme, and is on pace to set a career best tackle total.

While he is listed among the linebackers, note that he, too, as with Pierre-Paul above, has dual eligibility as a DL in both Yahoo and ESPN, making him a great addition to your IDP roster. He is coming off a two-sack effort, where he also collected five solos (three TFL) and a pair of QH against the 49ers.

Smith has netted five sacks in the past three games, including two against the host Chiefs last week. He is hassling opposing signal callers this season, with eight sacks on the season, and he did have a trio of QH in Week 8.

Bostic is getting significant snaps on defense, and is averaging better than seven TT per game this season. He picked up his first sack of the season against the host Vikings, and now has a great matchup when he heads to Buffalo in Week 9 prior to the Washington bye week.

Collins is that rare highly owned LB featured in this article this season, but he is potentially available for those of you playing on the ESPN platform. He looked rejuvenated in Week 8, gathering 13 TT (12 solo) and racking up a pair of sacks against the visiting Browns. The good news is that the Ravens are on the slate and provide another great matchup for opposing LBs.

Graham had a full stat line in Week 8, collecting six TT (five solo, two TFL) as well as forcing and recovering a fumble (FF and FR, respectively), getting a sack and also a QH. He has been sacking and tackling well over the past few weeks, after a slow start to the season, and has put up double-digit fantasy points in three of the past four weeks.

So long as Henry Anderson is limited with his shoulder issue, Phillips should see significant time on the defensive squad for the Jets. He racked up five TT (three solo, three TFL) in Week 8 against Jacksonville, and was also credited on the stat sheet with half a sack and a QH. Keep an eye on the injury report to see if he continues to start and can help out your fantasy team.

Vernon has become an every-down player for the Browns, and has a great matchup in Week 9 against the host Broncos in Denver. He collected a sack last week in New England, and a QH, to go along with his six solo tackles (two TFL), so now is a fine time to pick him up for your IDP squad in preparation for the six team bye situation arriving in Week 10.

With both Frank Clark and Alex Okafor on the injury report for Week 9, expect Ogbah to again see significant defensive snaps for the Chiefs when they take on the Vikings at home. It is not the greatest matchup, but the playing time bodes well for defensive production. He had a sack and three QH in Week 8 playing 90% of the snaps on defense, and collected four TT (three solo, one TFL), which is useful for IDP purposes to be sure.

He is coming on strong of late, with seven TT in each of the last two contests. In Week 8 against the host Vikings, three of those were solo tackles (one TFL). He also was credited with a sack and a QH. The Week 9 opponent, Buffalo, is a fine opponent to continue his hot streak against.

Through Week 8, Jarrett ranks as the top DT in fantasy. He totaled eight TT against the visiting Seahawks (three solo, one TFL), along with a sack and two QH. In DT-mandatory leagues, he is an IDP to target immediately off the wire, and should be available in the majority of leagues. Note that the Falcons are on bye this week, so if you do not have bench spots, plop him onto your watch list for a Week 10 add.

The San Fran defense features a boatload of fine DL options, but their nose tackle Jones is seeing significant playing time (PT), and is producing great results for those who play in DT-required leagues. He had five TT against the Panthers (four solo, one TFL) with a sack and QH to help out in big-play leagues.

Teamer was featured in this article way back in Week 2, but he should not be forgotten in the realm of available DBs for your IDP roster. He is fresh off a week that saw him make eight solo tackles, a QH, a pass deflection (PD) and a sack. He is still available in most leagues, so grab him if you want a steady strong safety for your team.

Smith is not providing the big-play production he demonstrated in his rookie season, although he is still providing tackle production. Thus, he is still a useful LB but not if you expected to see some sacks or PDs on the stat sheet when you added him to your IDP roster.

Davenport saw his PT take a major hit this past week, and he is now on bye for Week 9. This is an opportune time to cut him and find another DE to swap into his place if you have been relying on him for your IDP roster.

Ishmael is another IDP who is sitting out on bye this week, and coming off a week that saw his snaps limited to just 30% and him putting up a huge goose egg on the stat sheet, you should consider dropping him and finding another better safety to start going forward.

Remember, the first team listed is the one to use your IDPs against. Do not go crazy, and play a LB5 against the Giants, Broncos or Panthers, but certainly you will do well if you own a top CB on either Seattle and/or Tampa Bay that you can plug in this week, for the most part.

Jamie Collins , Sr. NE (Owned in only 39% of ESPN leagues, but likely unavailable in most Yahoo leagues where his ownership is at 72%)