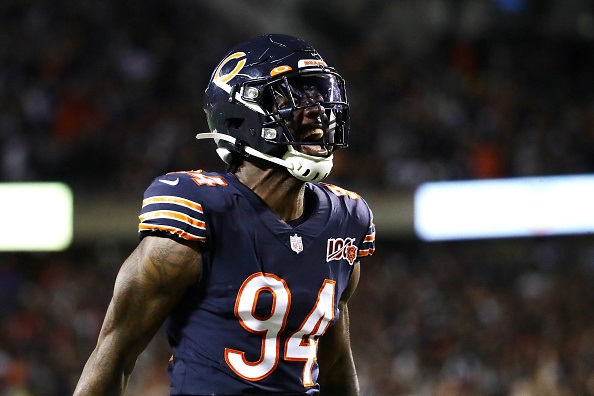 We are back with your weekly IDP report, to keep you up to date on those defensive players that are moving up in the rankings or dropping down the lists, based on recent performance. Below is also the most up to date injury report as of date of publication. Plus, even though the sample size is small, consisting of just one week of action, the best matchups for IDP purposes are suggested for your consideration. The Waiver Wire Target section will return once ownership levels start to shake out a bit more after the first couple of weeks of waiver wire claims being processed.

The Bear pass rushing LB collected a pair of sacks against the visiting Packers, to go with his four solo tackles, two of which were for a loss of yardage (TFL). He also hurried the QB twice (QH) in the opening week game. Khalil Mack is the name IDP in the Windy City, but this former first round draft choice is coming on.

Onwuason is trending as a three-down LB for the Ravens, a valuable commodity on a superb defense. He put up a stellar stat line against the Dolphins: five solo tackles (one TFL), two QH, a pass deflection (PD) and a sack. Of course, it was in a blowout victory against an overmatched Dolphin squad, so this sort of production should not be expected every week, but do look for continued IDP goodness going forward.

Hewitt was on the field for a whopping 68 of 69 defensive snaps in Week One, filling in for the injured Avery Williamson . He collected four solo tackles as part of his seven total tackles (TT). He added an interception (INT), a PD and two QH to flesh out his impressive statistical performance.

Hewitt’s teammate stepped in when C.J. Mosley was knocked out of the first week’s contest in New Jersey against the Bills, and so long as Mosley is sidelined, he will be a three-down LB, which as noted above with Onwuason, makes him valued in IDP circles.

Holcomb put up nine TT (eight of those being solos and two TFLs) against the host Eagles last week. The rookie made the most of limited snaps in putting those numbers on the stat sheet, and should be seeing more snaps on defense as the season progresses.

Kennard responded to being named the defensive signal caller for the Lions with his first three sack effort in his NFL career. He also added in four solo tackles (three TFL) and a trio of QH. With Jarrad Davis residing on the injury list below heading into this week’s contest, similar results could be in store for those who employ his services.

Bush had the difficult task of taking on the Patriots and Tom Brady , but played well when on the field (76% of defensive snaps played). He put up double digit tackle numbers with 11 TT (seven solo).

White had near every-down playing status in Week One (86%), and collected nine TT (eight solo) as a result. Beware of the Chargers going to a heavy rotation among their LBs, though, which would reduce his value to something more of a bye week stash.

Jewell snagged 14 TT against the Raiders, playing as an every down LB. Todd Davis being sidelined helped with his playing time, and he could drift back to two-down status going forward once Davis returns to action, but for now, he is worth grabbing and starting.

Habbard has a starting role on the defensive line for the Bengals, and rewarded his owners with a striking stat line in Week One: 10 TT (six solo, two TFL), two sacks, four QH. With low ownership across the board, now would be a great time to add him to your IDP roster. 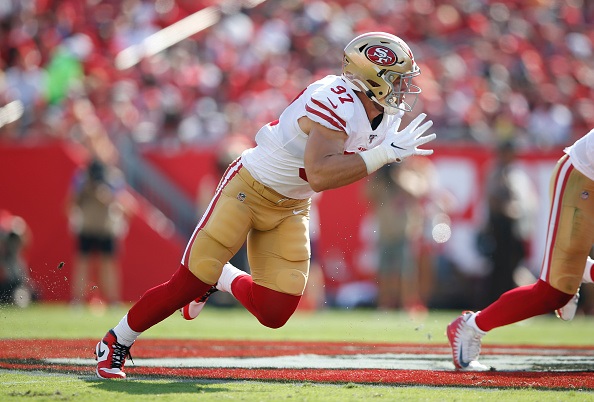 The rookie acquitted himself quite well in his first game as a pro, but note that he is listed as questionable on the injury report heading into Week Two. He opened the season with three TT and a sack against the Buccaneers, and if someone drops him due to the ankle issue, snatch him up now.

Jefferson was averaging better than two sacks a game during the latter portion of 2018 as a part-time player, and collected two sacks against the Bengals last week. He also had six TT (two solo, two TFL), while also picking up two PD and three QH. In a DT-required league, he has tremendous value.

Walker had nine solo tackles on Sunday against Arizona, but the frosting on the cake for a safety was the INT and two PD, making him valued in both tackle-oriented and big-play leagues.

The rookie has secured a starting role together with Tyrann Mathieu for the Chiefs, and had an eight TT effort against the host Jags last week (five solos).

King spread his fantasy value across the board against the Bears, with five solo tackles (one TFL), a sack, a QH and a PD. Not an overwhelming point total but varied and top-notch for a cornerback, to be certain.

It is looking like the Miami defense is going to be on the field a lot this season. Rowe had double digit tackles against the Ravens, with 11 TT (nine solo). Look for offenses to target Rowe a bunch, which will lead to weeks similar to his efforts in Week One popping up consistently.

Ragland was a healthy scratch in Week One, never a great sign for a LB expected to start in the middle of the linebacking crew. Unless and until he sees the field, he is good to cut from your team.

McMillian saw only 29% of the defensive snaps against the visiting Ravens, and collected just three TT (one solo). That is not the type of results that make him even worth a bench spot in IDP leagues.

Decline appears to have arrived for the former top LB in Dallas, who was relegated to just 16 snaps in the first week’s contest against the visiting Giants. Jaylon Smith and Leighton Vander Esch are the primary LBs you want on the Cowboys going onward into this season and beyond.

Thomas put up a huge goose egg on the stat sheet in Tampa Bay. Not a surprise, as he was on the field for just 17% of the 49ers’ defensive snaps. Of course, with Nick Bosa inhabiting the injury report below, that could shift in a positive way, but that is no certainly at this point.

None to mention yet, except those in the injury report below

Remember, the first team listed is the one to use your IDPs against. Do not go crazy, and play a LB5 against the Lions, but certainly you will do well if you own a top LB on the Chargers, Giants or Buccaneers that you can plug in this week, for the most part.

Will Compton NO ankle

As ever, good luck and Godspeed in your fantasy efforts. Make sure to read all of our great articles to help you win your fantasy match-ups every week and ultimately bask in championship glory. FANation Chat is live on the site, to help you work through your fantasy football dilemmas. Or if you have any fantasy football questions, especially about IDP leagues, you can also send a message to ia@fantasyalarm.com for a personal response from the writer of this article. Naturally, the more detail you can send about your league, such as number of teams, platform you play in (Yahoo, ESPN, etc.), scoring and roster system, the better the ability to provide accurate advice.