Ivar G. Anderson tells you why Brandon Finnegan is a viable option in the late rounds of fantasy baseball drafts. 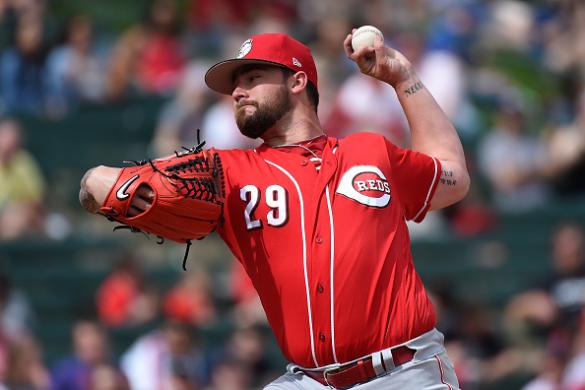 We are nearing the beginning of the regular season, so this series of articles about late round sleepers will soon be coming to an end. Of course, that means that I will soon be starting the two-start pitcher and streaming pitching articles for the balance of the season, so stay tuned. In the meantime, here is the tenth article in this series, profiling a starting pitcher that is pitching for a team that does not look like a division title contender, but due to the relative weakness of the Cincinnati rotation, figures to be a solid middle tier starter, and who could turn out to be the best overall option as a member of the Reds’ rotation.

To recap what these articles are about, I will be discussing starting pitchers that are being drafted in the 15th round or later based on their current ADPs. Note that I am assuming a 12 team league when determining which players are going after the 14th round, and thus if you play in a smaller or larger sized league, you will need to adjust the round accordingly. The ADP of 169 is a baseline, however, denoting where in any draft the player is being taken.

If you are late to the party, you can always see the first three installments on the site. There was some useful information in those early article opening paragraphs, at least in my opinion, but I tend to get bored publishing the same old, same old twice a week. Even so, I tried to distill some useful advice about drafting starting pitching in those first three articles.

His ADP has been dropping as indicated by his position in the FSTA draft in January and what we are currently seeing in mock drafts and NFBC. He is easily attainable late in your drafts, and will not be an expensive player to draft.

Finnegan was drafted by the Royals as a first round pick in the 2014 draft, but only recently became a starter, pitching out of the bullpen in Kansas City before being converted to a starter in mid-2015. He struggled initially as a member of the Reds’ starting rotation, but was superb following the All-Star break, putting up a useful 2.45 ERA in the second half last season. His success can be attributed to his development of his changeup, which helped make his low-90s fastball more effective. I expect him to continue to develop his off-speed stuff, and that should help him improve his ratio stats, while starting 30+ games and racking up decent if not fantastic strikeouts.

He pitches in a home park that is not pitcher friendly by any means, and this tends to elevate his HR/9 numbers (1.5 homers per nine innings in 2016). His BABIP and strand rates (.262 and 77.1% respectively over the last season) hint that he may have experienced a bit of unrepeatable luck, but if we look at his career numbers over the past two seasons, perhaps he is just a fortunate pitcher in terms of stranding runners and keeping the balls that are hit from turning into hits.

With his ADP putting him at the end of most drafts, assuming you are not in 15 team (or larger) league, and the potential to provide 175 innings and 160 Ks, he becomes a fine SP5/6 to draft in 2017. Do not expect more than 10 victories, just due to his team and the offense that backs him up. Using him when he is pitching in a favorable pitcher’s park could result in some nice production at a low cost in your drafts. I am targeting him late in my mixed-league drafts, and reaching for him a bit sooner in a NL-only league.