Ivar Anderson tells you why Jon Gray is a viable option in the late rounds of fantasy baseball drafts. 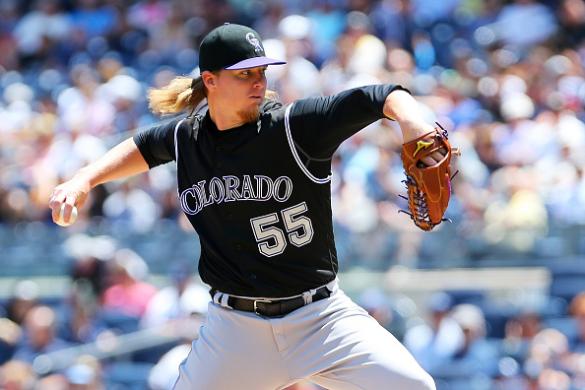 Five articles in to this series, and it is time to update the opening paragraphs. If you are late to the party, you can always see the first three installments on the site. There was some useful information in the early article opening, at least in my opinion, but I tend to get bored publishing the same old, same old twice a week.

To recap what these articles are about, I will be discussing starting pitchers that are being drafted in the 15th round or later based on their current ADPs. Note that I am assuming a 12 team league when determining which players are going after the 14th round, and thus if you play in a smaller or larger sized league, you will need to adjust the round accordingly. The ADP of 169 is a baseline, however, denoting where in any draft the player is being taken.

He fits in perfectly with the parameters of these articles, going in the 15th round in the most recent drafts we are looking at in early March. You see his stock has fallen just a bit since the FSTA draft in January which most of us agree is held too early to adapt to changing conditions in spring training. A source of strong K numbers is a great player to land in the middle ot later rounds of your 2017 drafts.

With excellent strikeout potential, having posted a 9.91 K/9 in his first full season in the majors, he is a fine candidate to repeat or at least come close to those numbers again. I like him to at least put up a K per inning pitched. I also project him to reduce his inflated ERA with a year of experience under his belt, perhaps coming in just under 4.00 in 2017. His 2016 FIP was nearly a full run below his ERA (3.66 to 4.61), and thus makes me confident that he can push down the ERA. He possesses a 95 MPH fastball, and generates a good ratio of grounders-to-fly balls, 1.65 GB/FB rate in 2016. Due to his home park, keeping the ball on the ground is important and led to his 1.0 HR/9 rate, which is pretty nice for a Rockies starting pitcher. Another positive is that he handles hitters from both sides of the plate equally well.

He pitches in Colorado as his home base, and that does not tend to produce superb ratio stats, although as noted above, I do expect an improvement in ERA. WHIP is another matter, and my projections for him are to settle in at something around 1.30-1.35 this coming season. He had an unlucky strand rate in 2016 of 64.9%, and a slightly elevated BABIP of .319 over his 29 starts in 2016. Even assuming he adjusts well in his second full year of MLB service, I cannot pencil him in for an improvement in his control and WHIP, unfortunately.

Just like the player profiled on Thursday, Robbie Ray of the Diamondbacks, he is a superb middle round strikeout producer. I also like his chances to provide a decent if not great ERA, but the other ratio stats will most likely suffer a bit, as I project his WHIP to inflate along with his BABIP in 2017. He will also probably see a bump in IP, so long as he stays healthy, likely starting 30-32 games and pitching 180-190 innings. Gray had a fine pedigree coming up through the minors, and looks to be one of those rare pitchers that can handle pitching half his games at Coors Field. If he can keep up the groundball production, he should be useful both at home and on the road, unlike a slew of past Colorado SPs. If you want to wait on your starting pitching, he is a useful option to target in the round 14-15 of your 12 team drafts. If you league is larger or smaller, adjust accordingly.