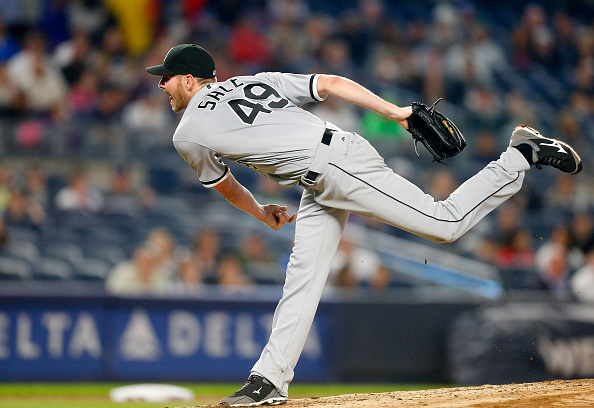 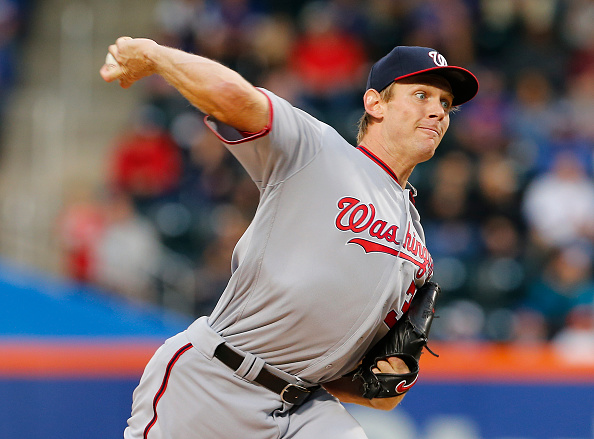 This week there are even fewer two start options than were available in Week 7. Not that there are no options to choose from, but unless you already own any of the pitchers in the top tier, you most likely will not have an opportunity to employ their services. The middle tier, however, is another matter and you should be able to pluck one or more of them off the waiver wire for use in this scoring period.

I have no hesitation about recommending any of the 11 starting pitchers in the top tier. The final three members, Drew Pomeranz, Rich Hill and Steven Wright are new residents in this group. I know I did not consider any of those SPs when I was drafting in March, and now it is much too late to land them as their ownership percentages have risen quickly with their success on the mound this season. If you own any of these guys, good job and good luck going forward with your wise fantasy decisions. 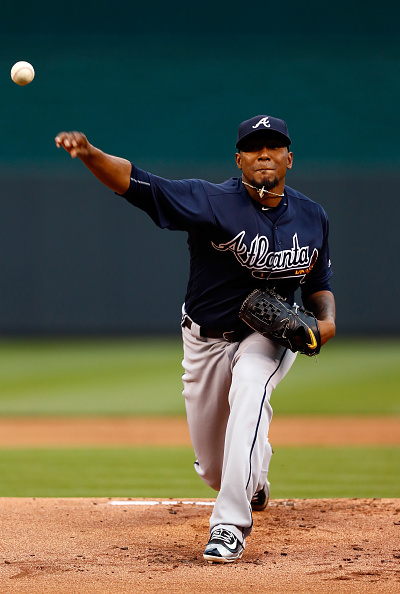 The middle tier is, as noted above, not as populated as we would like. I am going to divide it into two sub-tiers this week due to the limited number of pitchers in this group. The first sub-tier opens with Teheran and runs down through Koehler. Teheran pitches for what I consider the worst offense I have ever seen in my years of watching baseball. It is no shock that he is 1-4 on the season, the surprise is that he finally collected a victory in his last outing. He is providing nice non-counting stats with a 2.73 ERA and 1.11 WHIP over 56 innings His strikeout rate is league average but he has shown good but not great control with a 2.73 BB/9 ratio. Just understand that the victories will be few and far between this season. Nelson has been pitching well, and also showcases a useful 3.07 ERA and 1.18 WHIP this season, and he has managed to rack up four wins in his nine starts. His control is a concern, as he has walked 23 over his 58.2 innings pitched, and he only has a 7.07 K/9 rate. If you own him, this would be a good time to move him to another owner as his value will likely regress going forward.

Fister certainly will not tally many Ks for his owners, but if your league employs quality starts as a pitching stat, he is working on a superb six consecutive QS streak. His peripherals will not excite anyone, and that probably means he is available on your waiver wire. Dickey had been looking like he had rediscovered his Cy Young form, but it comes and goes. He was roughed up by the Rays in his last outing, and when his knuckler floats over the middle of the plate, he is going to struggle. I do like him against the Yankees, but would not trust him when taking on the Red Sox in his second start. Tillman has won five of his last six starts, all of which were quality starts. He is striking out better than a hitter per inning, but is also walking too many hitters to be fully trustworthy (9.23 K/9 and 3.66 BB/9). I would prefer to see him pitching at home, but he is backed by a powerful offense and has a good chance to continue the QS streak and perhaps his win streak, as well. Tropeano boasts a nice 3.30 ERA, but his WHIP sits at a bloated 1.58 due to the 22 walks and 47 hits he has allowed in 2016. He is also giving up homers at a career worst rate of 1.44 HR/9, which should stabilize and help him to pitch deeper into games.

The Angels are not going anywhere this season, but Tropeano's strikeout rate of 8.86 makes him useful in the right matchup, for example in his second start against the Astros. I would avoid him against Texas in his first start of Week 8. Eovaldi tossed a great one-hit, six inning game against the Diamondbacks in his last outing, and has pitched well in four of his past five starts. He continues to generate a ton of groundballs, and continues to surprise with his improved 8.32 K/9 rate. Improved control and the ability to miss bats consistently make him the second best starter for the Yankees, and a good option to run out there for two starts this week. Koehler is the final entry in the top sub-tier, and his major issue is a lack of control. He has been holding opponents to two or less earned runs in five of his last six starts, but the free passes have hurt him. He does not strikeout enough hitters to allow 5.36 walks per nine innings. He gets to face Tampa at his home park and any pitcher facing the Braves is well worth considering for a start.

The second sub-tier starts with Liriano and winds up with Volquez. Liriano has pitched well in three of his past four starts, although he only has a 2-2 record to show for his efforts. He was roughed up seriously by the Cubs in his start in Chicago two appearances ago, but that can happen to any pitcher with the Cubbies lineup. He is still an elite source of Ks, although his control has been suspect this season with an inflated 4.82 BB/9 rate over his eight starts. Taking on the struggling Shelby Miller and the Diamondbacks in his first start in Week 8 seems a good bet, but when he heads to Texas, you might want to exercise some caution about using him. 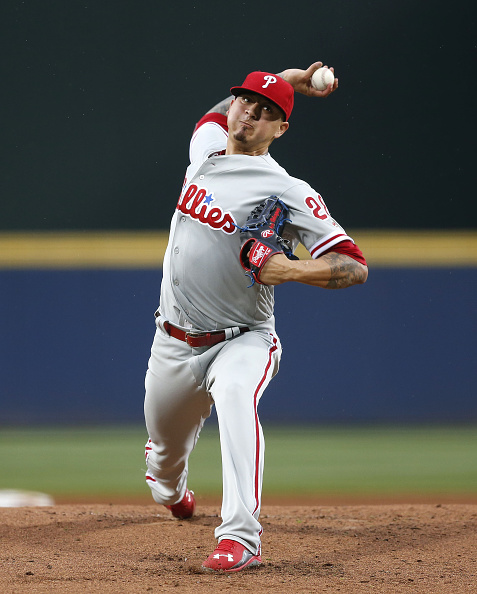 Velasquez has been a big part of the surprising start to the season by the Phillies, and he is ranked highly in four pitching categories we fantasy players care about: ERA, WHIP, Wins and Ks (2.42/0.99/5/59). He is going to have an innings limit this season, but no one is suggesting a hard cap yet. You are not going to find him on your wire, so if you want him, it will likely take a trade to put him in your rotation. Chen is inducing a massive amount of grounders, a career best 1.68 GB/FB ratio this season. He is an average strikeout artist, but the control is superb (1.65 BB/9) and he should have a better record than 3-2. He has tossed six QS in his eight starts. He gets Odorizzi and the Rays at home, and then a tasty matchup against the Braves for his second start. Odorizzi is suffering through a weak strikeout season, with his normal rate falling drastically to below 7 per nine innings (6.89 K/9 to be precise). He collected his first win of the season in his last start, and he has a couple of decent matchups this upcoming week, so do not forget about him, but also do not expect great things from him, either.

Kennedy is still striking out a batter per inning, but his walk rate hurts him (3.06 BB/9) and a 1.29 HR/9 rate is not the stuff to build a strong rotation around. His first start against the Twins is intriguing, and at least he gets to face the White Sox at home instead of on the road. He is middle of the pack SP, although you do have to like the strikeouts. Walker has been struggling, with three losses in his past four outings. He still sports a 2.95 ERA and 1.13 WHIP, with exceptional control and a nice strikeout ratio. A young pitcher, we all hoped his season would reveal a breakout for him, but he is still a useful commodity in fantasy. Plus, he has a couple of great matchups this week, facing the A's and Twins at home. Colon saw his usual great control desert him in his last outing against the Nationals, and he get to face Washington in his first start in Week 8, then follow that up with a matchup against the Dodgers and Clayton Kershaw. I still like BFBC but his past couple of outings have not been nearly as wonderful as were his first six starts to open the season. He could surprise, but I would prefer to sit him out this week given the quality of his opponents.

Tomlin has been looking good, but he has limited strikeout potential and if his control abandons him, he is going to get lit up. Add in a scary 1.7 HR/9 rate, and realize he is due for a regression, especially with an unsustainable .254 BABIP. Volquez is our final middle tier SP, and I will confess that I have finally divested myself of my final Volquez shares this week. He has his moments, but is too up and down for my tastes. He could be useful in his first start of the week against the Twins, but I would not suggest relying on him when he faces the White Sox at the end of the scoring period.

You will not do your team much good if you decide to use any of the denizens of the bottom tier in your fantasy rotations this week. Wainwright, Miller and Wacha have all proven to be major disappointments this season. Latos is coming back to earth, as many expected, since regression was a near certainty following his excellent start to the season. Moore had been looking good this spring, but has been unable to carry it forward into the season. If you were fooled by his work in spring training and drafted him, as I did, it may just be time to cut your losses and send him packing.