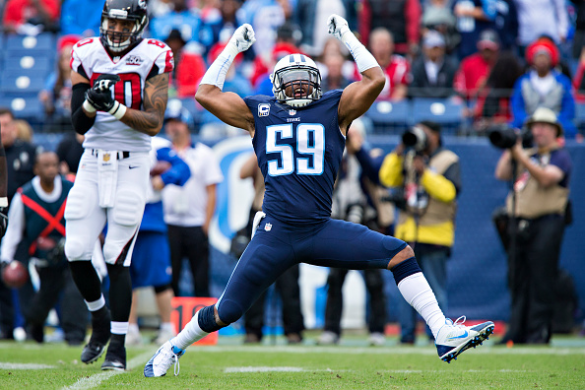 The bye weeks will be over soon, I promise. In the meantime, feast upon a wealth of defensive players that are stepping up their game, or taking advantage of injuries on their teams.

Not so many players to discount, as we go forward, as things have pretty much shaken out with regard to the underperformers all of us drafted back in August and early September. Thank goodness for the waiver wire, and its positive effect on our IDP lineups.

I have profiled Wesley Woodyard before in these articles, but he should really be almost universally owned. He has 42 total tackles since Week 6, with three sacks. He is available in 90 percent of ESPN and Yahoo leagues, and that is a crime. Of course, if you play against me, he is not available. Demario Davis finally had a big play, picking up a sack against the Bills. He has been a solid tackle producer, aside from a couple of weeks this season, but if he can toss in some sacks or pass deflections, he could move up the rankings to be a solid LB3. Tahir Whitehead is back in favor in Detroit, and at the expense of Josh Bynes it would appear. Last season, he put up 86 total tackles in 16 games with a few pass deflections (five, actually) and a pair of interceptions for good measure. If he is going to see starter snaps going forward, he is well worth adding to your linebacking corps.

Kelvin Sheppard will be a sneaky pickup so long as Jelani Jenkins is sidelined with his balky ankle. He had eight solos as part of his 11 total tackles in Week 10, which led all players in the Miami-Philadelphia contest. Jasper Brinkley is definitely flying under the IDP radar, but should see significant playing time with Jon Beason landing on the IR and Uani Unga out with an injury. Nine solo tackles (part of his 12 total), a sack and a forced fumble should bring him to the forefront of the waiver wire this week, but realize that he is on a bye in Week 11. If you have the bench space, snag him while the rest of your league is sleeping.

Derrick Shelby filled in when Cameron Wake went on IR with a torn Achilles tendon after the loss to Miami in Week 8. He had a sack, a forced fumble and four total tackles (three solos) in Week 10. If you need to find a fill-in for an injured player such as Cameron Wake, you could do a lot worse than Shelby. Linval Joseph leads off our odd triple threat of defensive tackles this week. Joseph is playing like a DE and not a DT, and you should roster him as your DL1. He was named NFC Defensive Player of Week 9, and surpassed those results in Week 10. He is simply playing excellent football on the defensive side of the ball, and should not be un-owned in any IDP league.

Aaron Donald has bounced back nicely after suffering through a mid-season slump. I liked him tremendously in my drafts this season, and while he was droppable recently, I still like his potential going forward this season. He already got second wind, after all, didn’t he? Tyrone Crawford is the third and final DT I will laud this week. He picked up a sack against the Buccaneers, and put up five total tackles (three solos) to pad his numbers. In a DT-mandatory league, he should be serious target on the waiver wire this week.

The Seahawks have to be ecstatic to have Kam Chancellor back in the fold. If he is still sitting on your league wire, you need to make him your primary waiver pickup for this week. If someone else grabs him, make a trade offer. He is simply that valuable. Bacarri Rambo really filled up the stat line in Week 10, posting two forced fumbles, one fumble recovery, an interception and pass deflection with three solo tackles. Not that I believe he will put up those type of numbers on a weekly basis, because frankly, who can? But I do think he is a strong add going forward. Buffalo’s defense has not been living up to expectations (see Mario Williams below), but individuals are worthy of a roster spot, and until Rambo cools off, you should consider using him. Isa Abdul-Quddus has replaced James Ihedigbo in the starting defensive secondary for Detroit, and the scoring crew credited him with eight solo tackles against the Packers in Week 10. It seems as though the revamped Lions coaching staff likes Abdul-Quddus over other players at this point, and he is an easy add as his ownership is under 10 percent in Yahoo and one percent in ESPN.

Will Allen is a top-notch player who, because of his bye week in Week 11, may end up relegated to the waiver wire this scoring period. Be smart, make him a wire target at the end of the week, and benefit as you head into the playoff weeks. Davon House is a targeted defensive back by opposing offensive coordinators, which means he has plenty of chances to be around the football. He benefitted last week, with eight total tackles (three solos), two interceptions and four (FOUR!) pass deflections. When you are the target, you have a chance to put up big numbers as a defensive back. Keep riding his production until offenses realize how he can hurt them on a weekly basis. Jude Adjei-Barimah is someone whose name I will have to learn how to type without thinking if he continues to start for the Buccaneers. He wrapped up six solos in Week 10 against the Cowboys, and offensive coordinators will continue to test him as a rookie corner. That will result in continued tackle opportunities, and potential big plays, as well.

Josh Bynes and Jake Ryan have been replaced in the starting lineups for both the Lions and Packers, respectively. Bynes is losing playing time to Tahir Whitehead, who I wrote about above and Ryan, while a fine dynasty bench player, will have to wait for an injury to be relevant again this season.

I know plenty of leagues that selected Mario Williams as the top 1-3 DE in the draft. That is why you need to constantly adjust, adapt and overcome your early season IDP mistakes. Feel free to drop Williams, as there is just something funky going on with him this season. Chris Clemons put up a goose egg this past week, but with just eight tackles on the season and a pair of sacks, that should not be shocking. As with Williams, give him the ole’ heave-ho before he derails your season in your IDP league. Gerald McCoy is another familiar name that is stinking up the joint this season. He has played four games where he has just one single solo tackle in each contest, and zero sacks. He is the third in a group of underwhelming defensive linemen that much more was expected of to begin the season.

With the staff shakeup in Detroit, it looks as though the once-favored James Ihedigbo is now fighting for a roster slot. Unless his playing time increases, avoid him now and in the future. It is looking like David Amerson has lost his role as a starter in the Oakland secondary with the return of T.J. Carrie. You can drop him as his production will be severely reduced going forward with Carrie and D.J.Hayden handling the cornerback responsibilities for the Raiders.

As ever, good luck and Godspeed in your fantasy efforts. Make sure to read all of our great articles to help you win your fantasy matchups every week and ultimately bask in championship glory. If you have any fantasy football questions, especially about IDP leagues, I can be reached at ia@fantasyalarm.com.