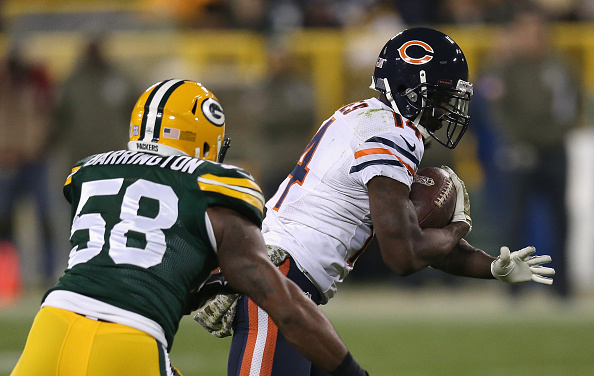 We are getting close to the opening of the NFL season. So close, yet we still need to await the final cut downs, hope that there are no more stupid injuries and that the coaching staff agrees with us on who should be starting for the teams from which we snag our coveted players. In anticipation of the opening kickoff, I propose that we look at some "sleeper" type IDP, those players your league opponents do not take into account on draft day until you select them and get to hear the head slap (this works best during in-person drafts, but that is also what the message board is for, right?). For this week's entry, I am concentrating on linebackers. I will switch to featuring defensive backs next week and may just sprinkle in some defensive linesmen to balance things out.

Last week, I promised to identify some “under the radar” IDP you may want to take note of and keep in the back of your mind when you draft. I am obviously writing for those of us who have embraced what our Draft Guide is calling “The Next Thing.” By the way, if you have not yet taken the plunge to grab the Guide, I implore you to do so. You do not want your opponents to get an advantage over you this season, do you?

Barrington is going so late in drafts that you may not need to use a pick to select him. He is an every down LB, and that is huge for IDP purposes. More time on the field, more time to accumulate stats. He is being drafted somewhere outside the top 50 linebackers and that is crazy, as well as a bonus for you, dear reader. Playing alongside Clay Matthews now that the Packers cut ties with A.J. Hawk and Brad Jones sets him up for big production in the middle of the Green Bay defense in 2015.

Weatherspoon's fortunes have been lifted due to the suspension of Darryl Washington for violating the league's substance abuse policy. He is slated to be an every down starter opposite

Kevin Minter for the foreseeable future. In the Cardinals 3-4 defensive scheme, he should have plenty of tackle opportunities. Remember, even when Washington is reinstated from his substance abuse violation, there is the sticky issue of a 2013 domestic violence conviction hanging over his head. So long as Weatherspoon produces, he should stick in the middle of the Arizona line backing crew. He is not without risk, coming off an Achilles' tear last season, and a recent hamstring issue, as well. As a LB4, he is an excellent draft choice this season.

I have picked up Rey over the past couple of seasons to fill in for injuries or bye weeks, and he has produced better than adequately for my teams. He is listed as a backup at outside linebacker going into the regular season, but with the injury history of Vontaze Burfict, he has a great chance to see starter's minutes at some point this season. He is probably not worth drafting and you can simply keep him on speed-dial when you need to restock your line backing crew.

Clowney is coming off an injury-plagued 2014 season, resulting in the depressed stat line shown above. In the Houston defense, he is projected to start outside at linebacker, although he could be employed as a DE in the nickel package. The former first round draft pick will not be playing in any preseason games, recovering from off-season micro fracture knee surgery, but he is expected to be on the field as a starter for the opening game of 2015. As the outside line backing position, he will not rack up huge amounts of tackles but is extremely valuable due to his potential to put up big-play stats game to game.

Kikaha led the nation in sacks in his final year at Washington, resulting in New Orleans snapping him up in the second round. With the Saints cutting pass rushing force Junior Galette this past July, his path to starting time was clear. He is considered a project, coming in as a rookie starter, but so long as he does not stumble, he should put up decent numbers for a IDP that you can grab late in drafts. His pass rushing skills are why the Saints drafted him, and the sack totals I am projecting could easily be eclipsed if he settles in at the NFL level quickly. I confess that I normally do not recommend using rookie IDP but when you have a starter that has proven sack ability, you may want to make exceptions.

Barr missed the last four games last season, pushing down his season totals. Plus, he is coming off surgery this past December to repair a torn meniscus in his left knee and has only recently begun to participate in preseason action. Both those issues have deflated his draft position, yet he is slotted in as the starting strong-side linebacker in the Minnesota 4-3 defense. Playing on the edge improves his big-play potential, but will hold down his tackle numbers, although taken as a whole, he can be a valuable IDP for your squad. Barr is not going to be drafted in most leagues, unless there is a starting spot for a third LB, so you can most likely grab him from the wire should the need arise early in the season. Think of his value as bench player that can easily slip into a starting role on your team, as he has with the Vikings.

I am happy to assist you in developing your own rankings, based on your league’s settings. You can contact me at my e-mail address listed at the bottom of this post, and request a set of personalized rankings. I need to know how points are assigned and how many IDP spots your league uses in the starting lineup. Also, make certain to put “IDP rankings” in the subject line to help me locate your message among the many I receive daily.

Should you have questions regarding fantasy football, especially IDP, you can reach me at ia@fantasyalarm.com to continue the discussion.