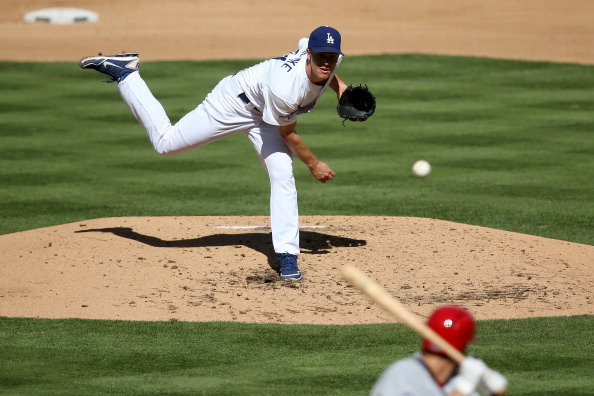 As I advised last week, we are winding up our two-start pitcher coverage as the focus shifts to football coverage. What you have before you is the penultimate two-start pitching article for this season. Of course, if you have a specific starting pitcher question between now and the end of the season, send it my way and I will do my best to guide you. My contact information is at the end of this article.

The top tier, as always, consists of pitchers I suggest you start for both their scheduled appearances, no matter the opponent or venue. These are the studs you rely on for superior production. Do not second guess yourself, just plug them in

and let them go. There are not that many that belong in this tier, so enjoy it if you own one or more of these guys.

The middle tier is not overly populated with options in Week 19. Despite the relative paucity of middle tier options, I still see this group as being divided into three sub-tiers, the first beginning with Anderson and running down through Niese. Anderson continues to shine for the Dodgers this season, continuing to rely on his ground ball inducing selection of pitches. He will not provide even league average strikeouts in his starts, but his 3.06 ERA is useful. He gave his owners a scare with an Achilles tendon issue last week, but bounced back to toss a pair of quality starts and seems poised to continue his fine performance in 2015. Across town, Shoemaker is also dealing, not having allowed a run, let alone an earned run over his past three starts and posting a 27:6 K/BB ratio in those 19 innings. He gets to face the pitiful White Sox in his first start, and while the Royals are certainly a difficult opponent to take on, and likely will not pad his K numbers, it is still difficult to not use him in both his appearances. Despite generating a good number of ground balls, De La Rosa continues to be plagued by the long ball this season. He gets a break this week, as Atlanta is ranked just above his home park in the fewest home runs allowed on the season. Neither of his opponents are great strikeout targets, but he should still rack up an average number of Ks this scoring period. Jungmann is a bright and shiny pitcher for the Brewers, who continue to struggle this season. He has allowed more than three earned runs only once in his past 11 starts, so the consistency is certainly in place. He has a lot going for him: good strikeout numbers (7.66 K/), minimal homers allowed (0.3 HR/9) and he causes batters to drive the ball into the dirt at a good clip (2.37 GB/FB ratio). I would suggest you grab him for the long haul, or at least the rest of the season if he is still on your league's waiver wire, as he is still available in 20% of leagues. Ross has taken on a full-time rotation spot, with Doug Fister being sent to the bullpen. He is building on six consecutive quality starts, and while his first start could be a bit of a test facing the Dodgers on the road, the second in San Francisco has better portents. His strikeout potential and excellent control make him useful to plug in this week. Niese, as anyone who has read these articles on a consistent basis, is one of my under appreciated gems. The strikeout rate is disappointing, but he relies on inducing ground balls and limiting fly balls, posting a 2.40 GB/FB ratio in 2015. He has shown great consistency, just like Jungmann above, having posted 10 QS over his last 11 starts. Despite his reliability, he is only owned in 50% of leagues and would be a good pitcher to stash away.

The middle sub-tier starts with Gonzalez and winds up with Hutchison. Gonzalez has been pitching well lately, driving his ERA down to a useful 3.75 from an unappealing 4.94 on May 19th. He has allowed two or fewer earned runs in each of

his past seven starts, although the last three starts lasted less than six innings and thus do not qualify as QS. Both his starts this week are on the road, and while he does not pitch as well away from Nationals Park, his second start is in a pitchers' park. Santiago, like his teammate Shoemaker, gets a good start and a not so good start this week, facing the beatable White Sox and then taking on the charmed Royals. Despite his 2.78 ERA and 1.18 WHIP on the season, he allows more than his fair share of dingers (1.3 HR/9) and suffers from control issues (2.78 BB/9). The nearly one strikeout per inning is nice, of course, and he may give up his rotation slot when Jered Weaver comes off the DL. Kennedy is a good source for Ks, although he yields far too many homers for a pitcher that calls Petco his home stadium. I like his start at home against the Reds more than the second start against the Rockies at Coors Field, which is why he sits in the middle sub-tier instead of up above. Haren's ERA has been slowing rising, and his first start with the Cubs did not help out, giving up three earned runs in just five innings and yielding two round trippers in the process. He has a couple of good match ups in Week 19, and gets to pitch in a pair of pitchers' parks. Hutchison makes the middle sub-tier because he is pitching both of his Week 19 starts at home, where he has been much better than on the road. Much better, if you take a look at his splits. He is facing a couple of pitchers that are in the bottom tier, so there is that going for him, as well.

Ventura opens the final sub-tier, which concludes with another Gonzalez, this one from Baltimore. Ventura has bounced back from his issues that saw him get sent to the minors in July to a certain extent, but is still struggling. His strikeout rate is around league average (7.08 K/9) and he is having control issues, with a 2.84 BB/9 ratio on the season. Ventura was roughed up to the extent of six earned runs in just five innings by Detroit in his last outing, and his 5.29 ERA and 1.34 WHIP are not favorable peripherals. He could easily have been relegated to the bottom tier, but I have seen some value in him on and off, so he is rewarded with a bottom sub-tier position. Gibson has fallen into a bad rut, giving up 21 earned runs over his last 22 innings pitched. Those four starts have seen his ERA rise to a not awful 3.78 ERA, but still a lot less satisfactory than the 2.85 he was sporting in mid-July. Gibson does have a pair of home starts, and that bodes better for his performance this week. Still, he is a desperation two-start option given his recent performance. Ramirez has been bouncing from excellent to awful over his past four starts, but if you look before that, he was pitching quite well. He does not doing anything exceptionally well, but pitches well enough in most starts to be useful. Gallardo generates a goodly number of ground balls when on the mound, but his strikeout totals are unimpressive (87 in 132.1 innings) and his control is poor, allowing 3.40 walks per nine. His two match ups are decent, though, and thus he escapes as another potential desperation two-start SP. Gonzalez winds up the middle tier, and he has only pitched into the sixth inning or later twice in his last nine starts. A lot like Ramirez and Gallardo, he is not anything exceptional, nor is he terrible. I like the start against the Mariners, but would prefer his second start not to be at home, but Oakland is a much weaker offense on the road and has not fared well against the Orioles in their three meetings so far this season.

The bottom tier is filled with questionable options to trot out in your fantasy rotations for Week 19. I cannot recommend any of these pitchers to you as potential rotation fillers. These guys are good for inflated ERAs and WHIPs, and potential blow-up starts. Just say no, and leave them on the bench or the wire, at least until they show some worthwhile consistency and production in their team's rotations.