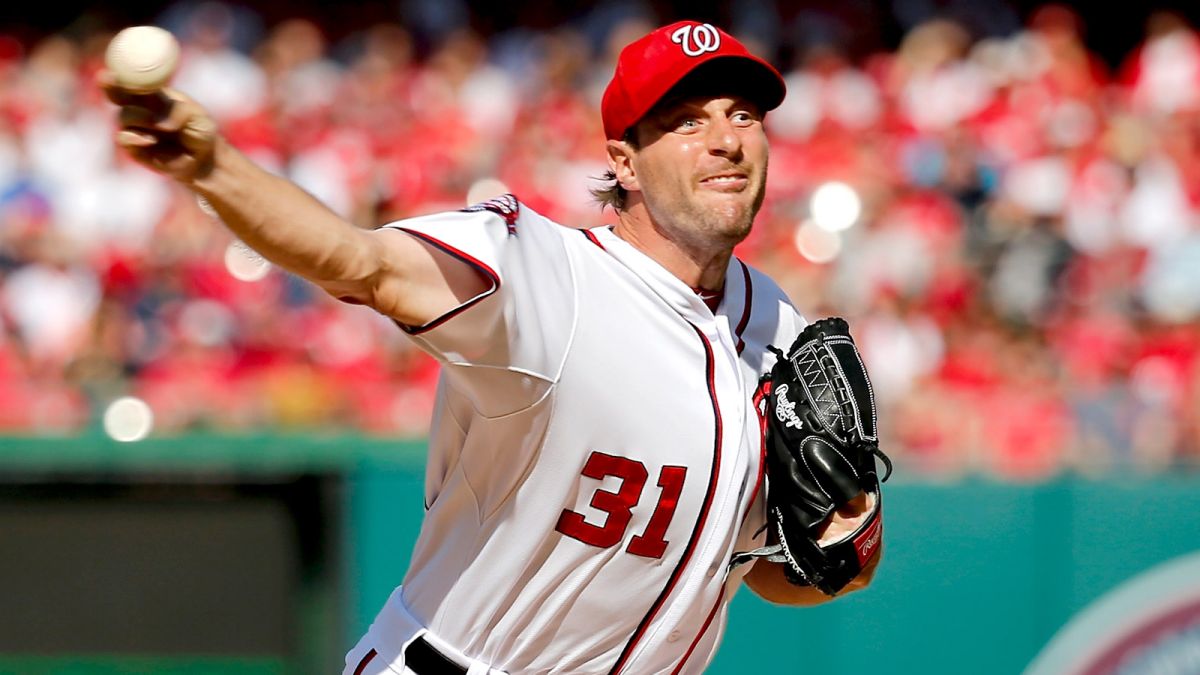 Week 18 serves us up some nice options in the two-start pitcher world. Now that all the non-waiver trades are completed, and the revised starting rotations have been worked out, it is time to set your weekly pitching staff up. Plenty of middle tier SPs are here for your consideration.

Just to provide fair warning, as fantasy football heats up, I will be cutting back on my starting pitching articles. There are two more weeks of this two-start pitching article scheduled, and this will be the final week of the streaming pitcher article. Of course, if you have specific questions about starting pitchers through the end of the season, do not be shy about sending me a note. My e-mail address is set forth at the bottom of the article, should you feel a need to inquire as to my opinion about a pitcher or three you are considering adding to your roster.

As ever, the top tier consists of those pitchers I would use without hesitation in both of their scheduled starts. If you have the good fortune to own one or more of these pitchers, consider

yourself lucky and just plug them in, wind them up and let them go. More often than not, you will be rewarded with good to great results.

The middle tier is again made up of three sub-tiers, the first opening with Chavez and ending with Lewis. Chavez has not been pitching as well as he was earlier in the season, but I like the fact that he is getting a pair of starts at the o.com Coliseum this week, where he has been extremely effective this season. He is a good source of Ks (7.8 K/) and generates a decent number of ground balls, keeping the ball in the park for the most part. Cashner also has a couple of good games to start this week, facing a pair of underachieving teams in Milwaukee and Philadelphia. He offers good strikeout potential, and has been showing better control recently. Corbin has been flashing his old pre-Tommy John surgery form in his past two outings, striking out 16 in in those 13 innings, while only yielding three walks. He could still have some relapses as he learns how to pitch again, but this is a good time to snag him if he is available in your league, especially if you participate in a keeper league. Odorizzi looked sharp in his most recent outing, dominating the Tigers, holding them to one earned run over six innings and striking out eight. He gets to face two bottom-dwelling offenses in Week 18, and should be started against both the White Sox and Mets. McCullers possesses a 2.48 ERA and 1.11 WHIP over his 13 starts, and also puts forth a 78:27 K/BB ratio in those 76.1 innings. He is having an excellent rookie season, and while I do not usually like my pitchers going to Arlington in August, his ground ball ratio (1.69 GB/FB) and ability to avoid giving up homers (0.4 HR/9) bode well. The second start in Oakland should also play well into his strengths on the mound. Lewis gets to face off against McCullers in his first start, and he has been pitching like an ace for the Rangers, despite having an inflated 4.42 ERA on the season. His K/BB ratio is an excellent 4.04 this year, so while the strikeout numbers are just average, the control he exhibits is exceptional. He has been slightly better on the road than at home, and that gives hope in his second start at Seattle, plus King Felix has not exactly been untouchable of late, so the match up is not terrible.

The middle sub-tier starts with Quintana and runs down through Peavy. Quintana has been slowly but steadily pushing down his ERA on the season, which now sits at an acceptable 3.52. He has given up only two walks in his past seven starts, where he has collected 43 strikeouts over those 47.2 innings. The White Sox have been playing better recently, and the start against Tampa Bay is particularly enticing. Colon has a chance to get back on track against a couple of beatable teams this week, facing the offense-deprived Marlins and Rays, both good pitcher's parks. He may lose his rotation spot once Steven Matz is ready to be activated, so use him now if you trust him against a couple of teams that do not put up a ton of offense. Verlander has begun to come around, going eight innings against both Boston and Tampa Bay, and holding both to just one earned run. Granted, those are not high-flying offensive squads, but the skills he was once lauded for seem to be back in his repertoire. His control is good, having issued just two walks in his last four starts, and the 10 Ks against the Rays was a good sign, too. Koehler has been having some bad luck, pitching well but taking the loss, at least until he gave up five earned runs in his last outing against the Nationals. He is not a strikeout pitcher, but both parks he is pitching in should help him keep the ball inside the stadium, and keep the opponents from scoring with his moderate ground ball inducing tendencies. Anderson has been a favorite of mine all season, slipping under most fantasy owner's radar while putting up a nice 3.14 ERA over his 117.2 innings on the season. He does not post even average strikeout numbers but you have to love the league-leading 66% ground ball rate. Pitching away from home has not mattered to him, as his home/road splits are eerily similar. Beware if you decide to use Tillman as a two-start pitcher, as he suffered an ankle sprain in his last start and may be forced to miss his first start against Oakland. If he does go, however, he will look to build on his QS streak: four in a row, five of his last six starts. His ERA and WHIP now sit at a still too high 4.35 and 1.33, respectively, but those are better than the 5.94 ERA and 1.64 WHIP he was sporting at the end of May. Tillman has found his groove and is once again pitching like an ace. Peavy winds up the middle sub-tier, and he, too, has rediscovered his skill set, the one that made him so valuable to the Giants in their World Series run last season. Despite pitching into the sixth or seventh inning, the strikeouts are lacking in his appearances, but the walk rate is good, and the peripherals are getting better, too.

The final sub-tier begins with Estrada and wraps with Bassitt. Estrada is not someone I generally trust, as he can pitch a stinker as well as a masterpiece (or at least a quality start) in

any appearance. He is a fly ball pitcher and that hurts his value, together with a below average strikeout rate. His two match ups are not exactly inspiring, but he does have a tendency to offer up decent stat lines in his outings, so if you are somewhat desperate for pitching help, his offense gives him a chance in most games to stick around and collect a victory. Nelson has been hot since the All-Star break, going 2-0 with three QS, and racking up 21 Ks over those 20.1 innings, although he has also been a bit wild, with nine walks in those three starts. He gets two home starts in Week 18, where he has been slightly better than on the road. Duffy had been pitching to good results, until getting lit up in his last start in Toronto, but he is not getting many swings and misses, and he is walking too many batters to be effective on a long-term basis. His 1.43 WHIP does more than hint at his potential troubles, and while he has been skating by, I would look elsewhere for a dependable SP. DeSclafini is coming off a seven inning shutout effort against the Cardinals, who he limited to three hits, but I would not expect a repeat of those excellent results in his first start against St. Louis at home in Week 18. He has a tendency to offer up too many free passes to escape trouble, especially with his weak 6.45 K/9 rate. On a positive note, pitching away from home, even at Chase Field, bodes well for him as his road splits have been a high point to his season. Peralta's fastball looked good, coming in at 95 MPH, in his first start after coming off the DL with an oblique injury. He has a pair of home contests this week, and he has been a better pitcher at Miller Park in limited action in 2015. Foltynewicz offers great strikeout potential in his starts, but also has a bad tendency to groove the ball and potentially hurt his neck watching the ball fly over the outfield wall, as evidenced by his terrible 1.5 HR/9 rate over his 60.2 innings. With his inconsistent behavior on the mound, he is useful only for the Ks. Cain has been up and down since returning to the Giant rotation, offering up good starts followed by poor outings. The strikeout rate and control are both good, and the track record makes him worth trusting to turn things around. Just understand that two road starts are not the best basis for a superb Week 18 performance. Bassitt sits at the bottom of the middle tier, but he has been pitching better than that. He has been unlucky, as he has tossed three QS in a row, but still owns a 0-4 record through his five starts this season and he was one out away from posting four consecutive quality starts. I do like his chances to pick up his first victory with a couple of home starts this week.

The final tier is comprised of those starting pitchers that I would not employ for one start, let alone two in a scoring period. I cannot in good conscience tell you to use these pitchers, as

the potential for disaster outweighs the possibility that any one of them will provide you with decent, usable fantasy stats. The occupant of this tier that disturbs me is Fister, who did rebound nicely in his last start against the Marlins, but his overall performance of late makes him untrustworthy, and the lack of strikeouts hurts his value as well. Just stay away from these pitchers this week.