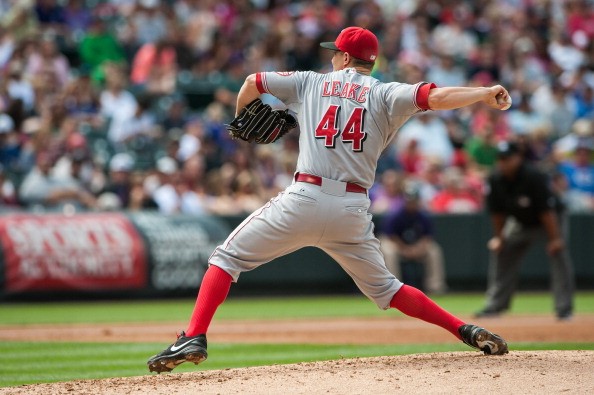 Aside from Wednesday, the streaming options are minimal this week. At least with regard to those pitchers I feel comfortable recommending for you to snag off the wire. Choose wisely and carefully to avoid blowing up your pitching stats. No point just grabbing a SP to accumulate stats, especially if there is a risk that those stats will be putrid.

On a weekly basis, I will be profiling those starting pitchers who are scheduled to take the mound in the upcoming scoring period. This is done to help you determine who to place try to grab from your league's free agent pool and/or who you should target as a player to send your FAAB funds on. Note that all the streaming options listed below are owned in less than 50% of leagues, and thus could be available on your waiver wire. Here are this week's set of potential streaming targets.

Leake is coming off a nine strikeout performance against the self-same Phillies team in his last start, so he is well worth a start on Monday. I cannot recommend that you use him as an every start SP, but he does have his moments against weaker offenses. Note that his road results have been far better than his efforts at home this season, though.

Like Leake above, Frias has been much better away from Dodger Stadium by a huge factor. That being said, his ground ball inducing ways should help calm down the Diamondback bats. He is not a great strikeout option, and he does walk a few too many batters to be a usable full-time SP, but he is the best available on Tueday.

Hahn does a good job throwing strikes, posting a 1.89 BB/9 rate over his 11 starts. Good thing, since his strikeout rate is well below league average. He has been excellent at home this season, so despite

facing a hot Texas team, he should keep the ball in the park and I like his chances to post a QS.

Speaking of QS, Anderson is working on string of three consecutive QS, the last two against the Cardinals. Look for him to keep the ball in the park, a recipe for success against the Diamondbacks, although his strikeout rate does not promise much in the way of missed bats.

Morton has been exceptional at getting batters to hit the ball on the ground, and good thing, given his horrible strikeout rate in three starts (6 Ks in 19 innings). He has won all three of his starts, and has a fine 2.84 ERA and 1.16 WHIP so far this season. Milwaukee is certainly not a formidable offensive team, and the Pirates are playing well right now.

Wada is someone you might be considering claiming off of waivers while the getting is good, since he is posting good strikeout numbers since coming off the DL (9.31 K/9 over four starts and 19.1 innings). His dominance has been fading, due to a lack of overpowering stuff, but he has pitched better at Wrigley than on the road, so this is a good spot to throw him out there.

Locke has been going through a bad patch over his past two games, but still seems likely to remain in the Pirate rotation for the time being. He does get to face a less than stellar offense when he faces the Phillies at home, and so long as he can continue to induce groundballs at a superb pace (2.17 GB/FB this season), he could be useful. Not that there is much else to use on Friday this week.

Vogelsong continues to hum along, especially at home. He has a 2.25 ERA and 1.04 WHIP at AT&T Park in five starts in 2015, and the spacious dimensions of his home park should assist him in keeping the Diamondback bats in check. He is a great streaming option when pitching at home, and he is the best option available on Saturday.

I will confess, I am not totally behind using Vargas. He has his moments, and the Royals are a charmed team. Last season, he was a much better pitcher away from Kansas City. He does face the best team in the MLB, but the Cards have to lose some games, right? Really, he is the best option to wrap up Week 10, but I would fully support a decision just to ignore this streaming option and look to next week.