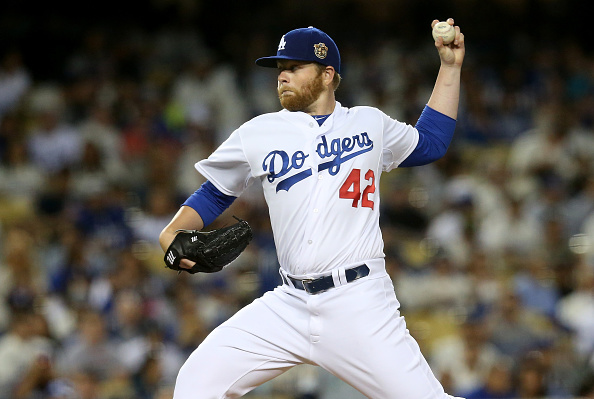 Lots of options to stream into your lineups this week. That is, unless you were counting on a Thursday full of streaming. On a weekly basis, I will be profiling those starting pitchers who are scheduled to take the mound in the upcoming scoring period. This is done to help you determine who to place try to grab from your league's free agent pool and/or who you should target as a player to send your FAAB funds on. Note that all the streaming options listed below are owned in less than 50% of leagues, and thus could be available on your waiver wire. Here are this week's set of potential streaming targets.

Anderson has been missing more bats as of his recent couple of starts, bring his K/9 rate closer to his career 7.0 K/9 ratio. He has been stingy with the free passes, per normal, and generating a ton of ground balls, too. Facing Atlanta at home makes him a value option in this start.

Hahn pitching at home is enticing, although you really never know which Tiger offense is going to show up game to game. His strikeout numbers have been increasing as May has gone on, and generating a whole bunch of grounders from opposing hitters.

Wada is looking good, coming off the DL to stymie Padres in his first start of 2015. Well, he did give up two runs in less than five innings but the nine strikeouts gave a hint of his value going forward. No, he will not continue to strike out batters at a 17.4 K/9 rate, but he was awfully good at home last season. You have to keep in mind that Washington has been hitting well on the road, but they also rack up strike outs in the top third of the NL this season so far.

Garcia went seven innings in his first start coming off the DL, although he did walk five hitters in that appearance. He pitches at home, where he has not exactly been lights out the past two seasons. He

has been a good source of strikeouts in the past, and those should come as he gets comfortable on the mound this season. The biggest concern with Garcia is health, but hopefully, he can get through this start without having to miss more time this season.

Hendricks faces a tough road team in Washington, but he is coming off his first win of the season, a five hit shutout against San Diego. He has great control, with a 1.77 BB/9 ratio over his eight starts on the season, which accounts for his 1.18 WHIP through 45.2 innings. His FIP is sitting at a reasonable 3.51 opposed to his 4.14 ERA, so he is pitching a bit better than his stat line would suggest. The 66% strand rate hints as some luck, granted, but this is a decent SP to take a shot with on Tuesday.

Young is not a great source of Ks, but you have to love those peripherals: 0.94 ERA and 0.63 WHIP over 28.2 total innings (three starts on the season). He has been stingy with the homers this season, too, but that might be asking a bit much of the right hander in Yankee Stadium, given his 0.45 GB/FB ratio this year. Still, it is hard not to ride his hot hand, especially since he is likely due to return to the pen once Jason Vargas comes off the DL. In fact, this start is not written in stone, so keep an eye on his status in Week 8.

No one that I want to recommend out of hand today. If you have a question about a particular matchup (or if you have your heart set on streaming someone, anyone, today), e-mail me and I will do my best to advise you. If you happen to trust my advice, that is. Make sure to put "Streaming Pitching" or the like in the subject line so that I do not inadvertently delete your message.

Atlanta has been a middle of the pack offense this season on the road, and Hudson has been more of a road warrior than a homebody this season, but Hudson has been fairly dependable, except for one terrible outing against the Marlins at home at the beginning of May. If he can demonstrate his normal ground ball inducing tendencies and great control, then he should do well in this start. Plus, he is the best streaming option available in this slate of pitching options.

Elias has been pitching better than his record would indicate, as he has been subjected to a wimpy offense when he takes the ball. Of course, it could be worse, as evidenced by his 4.18 FIP and 2.76 ERA; the discrepancy between those two ratio stats is due for some adjustment. If you are wondering why he would be recommended as a streaming option, there is the fact that he faces Cleveland at home, where he has been extremely good this season. That, and he has been demonstrating better control lately.

Hahn gets to face the Yankees at home, which plays to his strength in terms of his home/road splits this season. Aside from pitching in the Coliseum, his strong ground ball tendency should help diffuse the opponent's bats. As noted above when I discussed his first start this week, his K numbers are on an upswing, as well.

The second Anderson featured this week has really only had one poor outing this season, and has been superb when tossing on the road, posting a 1.42 ERA and 0.91 WHIP with 17 Ks in 25.1 innings.

He is coming off three consecutive QS, two on the road, although you might want to take a peek at what he does in St. Louis earlier in this scoring period on Monday.

Lohse is on the mound for the Brewers, facing the visiting Diamondbacks and Anderson, who was profiled just a few lines above. Arizona is a league average offense on the road. Lohse has been showing good control this season, and has ramped up his K numbers, too. His peripherals are nothing great, but have been improving as the season goes on. Of the two SPs facing off in this game, I would lean toward Anderson, but Lohse is not a terrible option either, given the propensity of the visiting team to not overly light it up on the road.

Phelps was coming off five straight QS, before losing at home to Arizona, yielding four earned runs in five innings. He has been a solid SP option this season, although it would be nice if he could improve his control (3.0 BB/9 through seven starts) and start missing some more bats. He does get to pitch at Citi Field, and that should just amplify his already superb ability to avoid giving up long balls. His team is struggling, but he is getting the job done on the mound.