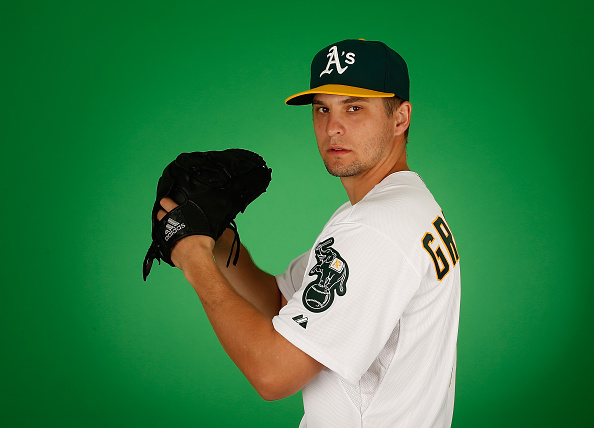 On a weekly basis, I will be profiling those starting pitchers who are scheduled to take the mound in the upcoming scoring period. This is done to help you determine who to try to grab from your league's free agent pool and/or who you should target as a player to send your FAAB funds on. Note that all the streaming options listed below are owned in less than 50% of leagues, and thus could be available on your waiver wire. Here are this week's set of potential streaming targets.

I have written this before and I am certain I will write it again: I love Oakland starting pitchers. If Billy Beane targets a pitcher for his rotation, I will ride him out. Graveman was dropped in a ton of leagues after the terrible pasting the Rangers laid on him in his first start (3.1 IP, seven earned runs, and he is still largely un-owned even after beating the Astros on the road in his second start. He is a good pitcher, grab him now while you can.

Haren is a two start pitcher this week, and while I am not overly excited about him pitching in Philly and that hitter-friendly ballpark, I like that he takes on the Phillies and Williams in this contest. Haren has been evidencing great control, and limiting base runners, generally a good recipe for success, despite his struggling offense backing him.

Niese is woefully under owned in fantasy leagues, for someone sporting a 1.59 ERA. Of course, some of that is the lack of strikeouts as well as his inflated 1.76 WHIP. He has given up 16 hits and four walks over 13.1 innings so far this season, but his game is inducing groundball outs and he has been excelling at that. Pitching at home is a plus.

Anderson is also a two start option this week. I realize his mound opponent, Lincecum, has come out of the gate fast, and this is definitely his worst start of the two he will make this week, but then again, he is facing a weak San Francisco offense here. He and Niese are two SPs I would pick up not only for their two start Week 3, but going forward, too.

Only Happ makes the cut on Wednesday. He has nice ratios with a 2.70 ERA and 1.05 WHIP over two starts. Do not expect terrific strikeout numbers, although he could generate a few with the free swinging Astros in town.

Harang just keeps pitching and surprising most everyone, except those in the front office who like his makeup. I do not believe anyone who drafted or picked up Harang expected that he would be 2-1 in

three starts covering 18.1 innings with an excellent 1.96 ERA, 0.98 WHIP and a 15:5 K/BB ratio. My advice is to ride his hot hand for as long as you can, and when the inevitable drop off in production comes, drop him like a hot potato. I do like his chances for continued success at Miami this week, though.

Locke is not an exciting option, but he is backed by a strong offense, and while he does not generate many Ks, if he can continue to drop his deceptive change up in the strike zone, he will be effective. He has been inducing a bunch of ground balls so far this season, and while he can be streaky, right now he is on a good kind of streak. Just do not fall in love with him and be ready to relegate him to the bench or the drop him if his success turns into mediocrity.

Gonzalez pitches at home, and as he has pretty even home and away splits, that does not concern me. He is also coming off a superb start against the Yankees, where he struck out 10 batters over seven innings while yielding just a single earned run. Boston will be a tough test, but if his changeup is working, I see his early season success continuing.

Salazar is coming off a great first start where he fanned 10 over six innings against the Twins. If he can continue to dominate hitters in that same fashion, he will form a great third member of the Indian rotation behind Corey Kluber and Carlos Carrasco. Trevor Bauer may have something to say about that, but he is certainly better than T.J. House right now. He still allows too many balls to leave the park, a constant issue for him, but that is something he can work to improve. Pitching in Comerica Park in this start will help limit the long ball damage.

I already talked about Graveman several paragraphs above, so let me just say that pitching in Oakland makes for a great opportunity for him to shine.

Despaigne is especially good at home, so no matter who goes for the Dodgers, I like this match up. His first two starts this season were at home, and he is currently sporting a 0.77 ERA and 0.34 WHIP. Expect some regression to occur, obviously, perhaps as early as his first start this week when he faces Colorado on the road. This start, however, has the possibility to allow him to continue his early season achievements or if the worm turns at Coors Field, rebound from a rocky start.

Koehler does have a tough match up in his Saturday start. He has faced off against the Braves in both of his starts through Saturday (he is scheduled to face the Mets at Citi Field on Sunday), so it will be interesting to see how he fares against the Nationals. He is not a great source of strikeouts, but he is generally consistent and pitching in Miami is a good omen as his splits show he favors home cooking.

Buehrle is the kind of streaming option you can generally find on your league waiver wire all season long, as his lack of Ks and inflated WHIP are not things you want to accumulate week in, week out. Pitching at Tropicana Field lines up as a good start to take a chance on him, though, although I would certainly rather own his mound adversary. Of course, Archer is not available in most leagues with an ownership percentage at 96%. So run with Buehrle if you are feeling lucky or desperate.