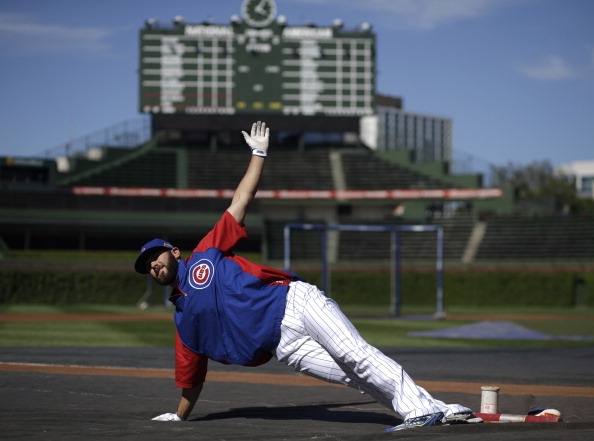 We roll into Week 3 and the choices for two start pitcher are not as deep as they were last week. As I do all season, I divide the two start options into three tiers, and my suggestion is to avoid those in the bottom tier. You may disagree with my rankings, and I am more than willing to discuss this in the comments. Let us take a look at who gets to take the mound twice in this upcoming scoring period.

You will get tired of me saying this, but with this tier of pitchers I suggust that you simply wind them up and let them go. I know Iwakuma is not looking like a SP2 early on, but I trust him. Same thing with Shoemaker. Do not overthink this. I trust these guys no matter who or where they are pitching.

Because there are not as many entrants in the middle tier this week, I am going to split them into just two sub-tiers. The first of those runs down through Haren, beginning with Burnett. Burnett is pitching

well, throwing strikes and not walking hitters, a great recipe for success.Volquez is part of the retooled Royals team that has looked strong early on. I like him in both of his matchups for Week 3. Morrow is working on two quality starts to beging the season, and has been collecting Ks, just like the two pitchers above him in this table. I am not so fond of him in Colorado in his first start, but getting the Dodgers at home is nice. DeSclafani continues the trend of pitchers who are demonstrating good control and dominance on the hill. I do like both matchups this coming week. Simon has surprised me with his his rebound from his first start, which while a win was ugly. Moving to Comerica and leaving Cincy seems to be agreeing with him for now. I would not bank on him being as good as he was against the Pirates all season long. Niese, as I have noted before, does not get his proper due. It is difficult to ignore a 1.59 ERA through his first two starts, and so long as he is healthy, he is valuable back end of the rotation SP. Pomeranz got rocked by the Astros in his last start, giving up a two run homer in the first inning and his team could not produce enough offense to bail him out. I have a thing about Oakland pitchers, and will continue to roll him out there despite the blip on the radar. Haren rounds out the top sub-tier, and he has been a bright spot in a nasty beginning to the season for the Marlins. Maybe he should have fought harder this spring to get traded?

Buehrle kicks off the second sub-tier and while he will not get you a ton of strikeouts, he does have good command, keeps his team in the game and is generally safe to start, even in his hitter-friendly home park in Toronto. Chen is another dependable if unexciting SP. Facing Masterson twice this upcoming period makes him all the better for fantasy owners. So long as Brett Anderson can stay healthy, he has the skills to succeed. It is the durablity factor that should concern you if you have him in your fantasy rotation. Graveman's owners dropped him en masse after his disastrous first start, but he is a good pitcher, and he pitches for Oakland, always a good sign when choosing your starting pitchers. I just love Oakland SPs, have for years. Despaigne is filling in for

Ian Kennedy, who is on the DL. His first start is an issue, as his road and home splits are dramatic and pitching at Coors Field is not necessarily the best venue for him to ply his trade. I do like the second start at home against the Dodgers, even if we do not know who will face off against him for LA. Wood was not good in his first start (at Coors-seeing a trend?), but bounced back nicely with a three hit shutout effort over seven innings against the Reds at home. If he keeps missing bats and demonstrating good control, he becomes a valuable back-of-the-rotation guy in fantasy. Matzek concerns me despite his early success in 2015, as he calls Coors Field home. Still, he has been getting lucky in his first couple of starts with a 3.90 FIP as opposed to his 1.80 ERA. He is a spot starter for me, and I am going to avoid having him in my lineup when he is at home. Miley has the propensity to pitch effectively, then toss up a stinker the next time out. If he cannot throw his fastball for strikes, as against the Nationals in his most recent start, he is not useful for fantasy purposes.

There are a ton of names in this tier, and some may be surprising. My approach to ranking two start pitchers is to decide who can help me with the least amount of risk. With this bunch, the risk/reward is

too far pushed to the risk side of the ledger. The two Milwaukee starters are struggling, just like their team. I expect they will pitch better at some point, but it is not right now and for the nonce, I would avoid both. know that Lincecum has looked good, but he has burned me too often the past few seasons. Let's see what he is doing when May rolls around, and if he is still being effective, then maybe I would consider adding him if he is still available. Noesi and Santiago have decent enough stat lines so far, but again, not in my trust zone. De La Rosa is coming off an injury, so I am witholding my support for him just now. Wojciechowski is a short term solution while Drew Pomeranz is on the DL, and certainly has not shown that he is the next ace to join the Houston rotation. Masterson, Sabathia, Vargas, Norris, Gibson, Cahill, Williams and Marquis all sport ERAs that make them extremely unpalatable early in 2015. No need to take a chande on any of them.